A new therapeutic approach for pneumonia

Researchers from Charité – Universitätsmedizin Berlin were able to positively influence the immune response in severe viral and bacterial co-infection. Using a human lung tissue model, they were able to show that the immune mechanisms triggered by viral pathogens prevent the tissue from mounting an effective response against a simultaneously occurring bacterial infection. The researchers successfully tested a new drug-based treatment aimed at correcting this misguided immune response (which occurs, for instance, in cases of pneumonia). Results from this study have been published in the European Respiratory Journal*.

According to the World Health Organization (WHO), pneumonia counts among the five most frequent causes of death worldwide, with estimates suggesting that a child dies of pneumonia approximately every 15 seconds. Given that elderly people are also frequently affected, pneumonia remains one of the most significant health care issues of our time – with mortality rates unchanged for more than 70 years. There are several reasons behind this situation, the first being the development of increasing levels of bacterial resistance against antibiotic therapy. Another is the fact that, so far, we have failed to find drugs which are effective against many of the pathogens responsible for pneumonia. “In most cases, the main problem is an immune or inflammatory response causing excessive organ damage,” explains Prof. Dr. Andreas Hocke of Charité's Department of Internal Medicine – Infectiology and Respiratory Diseases Unit. In an effort to promote the development of new therapeutic approaches, the German Research Foundation (DFG) has been providing funding support to the SFB-TR84 Collaborative Research Center (which is dedicated to researching the fundamental mechanisms involved in pneumonia) since 2010.

As part of these DFG-funded efforts, Charité-based researchers, led by Prof. Dr. Andreas Hocke and Prof. Dr. Stefan Hippenstiel, have developed a human lung tissue model capable of simulating crucial characteristics of pneumonia. Most of the investigations of this type, which have been conducted across the globe, have been using cell cultures or animal models. Extrapolation limitations mean that some of the biomedical findings from these studies are difficult to translate to humans. The new experimental approach allows researchers to create a three-dimensional tissue structure model, which makes it possible to simulate and study human pathogens and their disease mechanisms. “We were able to analyze the ways in which viruses and bacteria interact with human alveoli during the first hours following infection, and we were able to show that these differ from those seen in animal models,” says Dr. Johanna Berg, a researcher who is also the study's first author. Working with Dr. Katja Zscheppang, she started by infecting human tissue with dangerous influenza viruses. The two researchers then proceeded to infect the tissue with pneumococci, in order to create a particularly severe form of pneumonia.

The immune system varies in its response to viruses and bacteria. The researchers worked on the premise that the immune system's response to the virus is directly responsible for inhibiting an equivalent response targeting bacterial pathogens. This places the bacteria at an advantage, and they are thus able to multiply inside, and cause damage to, the lung tissue. The experiment confirmed the researchers' assumptions. Following infection with the influenza virus, human lung tissue initially mounts a highly differentiated response. “We were able to show that the immune response which is triggered by the virus has an adverse effect on a subsequent bacterial infection caused by pneumococci,” explains Dr. Berg. She adds: “The main factor involved in mediating the body's inflammatory response, interleukin-1 beta, is being inhibited in certain alveolar immune cells. This prevents any subsequent activation of the immune system, and may even suppress normal cellular repair mechanisms.”

In order to influence this faulty immune response, the researchers used a drug which is already undergoing clinical testing for use in other inflammatory diseases and cancer. “The substance inhibits tyrosine kinase-2, a protein responsible for mediating the lung's immune response to viral pathogens. By doing so, it restores the immune system's ability to fight the bacterial infection,” explains Prof. Hocke, the study's principal investigator. Developed in conjunction with an industrial partner, this new therapeutic approach has been submitted for patent. The researchers are planning to conduct further studies involving human lung tissue models, which will look at potential feedback effects on the tissue's ability to fight viral pathogens. They are also hoping to develop a way to test their findings in a clinical trial. 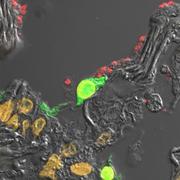 <
Simulation of viral/bacterial pneumonia in a human lung tissue model.
Reproduced with permission of the European Respiratory Society ©: Eur Respir J 2017; 7: 1601953.
None

Simulation of viral/bacterial pneumonia in a human lung tissue model. 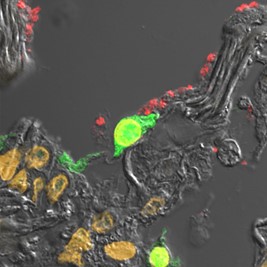