Size matters: Biologists at the University of Halle are studying how thrips choose their partners

The bigger the male, the higher his chances to successfully mate – this applies, at least, to thrips, insects measuring only two to three millimetres in length that are hard to recognise with the naked eye. The larger males not only drive off their smaller rivals, they also have better immune systems and produce more sperm. This is a discovery that was made by biologists at Martin Luther University Halle-Wittenberg (MLU). Their study recently appeared in the international "Journal of Insect Behaviour".

"Larger males have better chances of procreating than their smaller rivals," says Dr Stephanie Krüger, the study’s lead author. The researcher works alongside Dr Gerald Moritz, a professor of biology from Halle who has been studying thrips for many years. Krüger has investigated a species of thrips called Echinothrips americanus which is only 1.3 millimetres in size. This species is a pest insect that came to Europe from the USA at the end of the 20th century and is now a common occupant of Germany’s greenhouses. These small insects, which belong to the order Thysanoptera, shouldn’t be underestimated as the damage they cause to the agriculture industry and the horticulture sector can run into the millions.

There are many reasons why the larger males have a higher reproduction success rate. "For one thing, strong males drive off their smaller rivals. Their size also allows them to more easily mount females when mating," says Krüger. Added to this is the fact that females from many different species of insect prefer larger males as they promise a higher probability of survival for the eggs and offspring. Furthermore, the animals produce more secretions, which females use as nutrients during egg production. There is even a benefit to male fertility: they produce more sperm.

Until recently little had been scientifically known about the reproductive biology of thrips. The biologists from Halle were able to refute, for example, the wide-spread hypothesis that so-called sternal glands impact mating success. The actual purpose of these glands, located on the insect’s abdomen, remains unclear. Krüger has a hypothesis, and further research should allow her to determine whether male thrips guard the pupae with the intention of being the first to mate with the hatched females. "We presume that the males mark the territory they are guarding," says Krüger. If they have a larger pore plate, and consequently more sternal glands, they have an advantage over other males by being able to demarcate their territory. The biologist would also like to analyse whether the females actively seek out their mates or whether the larger males are more successful in finding a copulation partner due to their higher levels of aggression.

The research division "Development Biology" at MLU, led by Professor Gerald Moritz, has been studying thrips for many years. More than 6,100 species belong to their order. These micro-insects, with their stinging and sucking mouthparts, have caused a great deal of resentment in the agriculture industry. They infest cut flowers and damage fruit and vegetables by boring into the plant cells and extracting cell sap. For instance, they have diminished harvest yields of strawberries in the USA and Germany. In addition, several species transmit major plant viruses. Thrips are also a nuisance in the living rooms of plant lovers throughout the country. Their sucking leaves behind an optically displeasing, silver-grey discoloration on indoor plants like the rubber plant and palms.

<
A plant with thrips
Stephanie Krüger
None

<
A plant with thrips
Stephanie Krüger
None

A plant with thrips 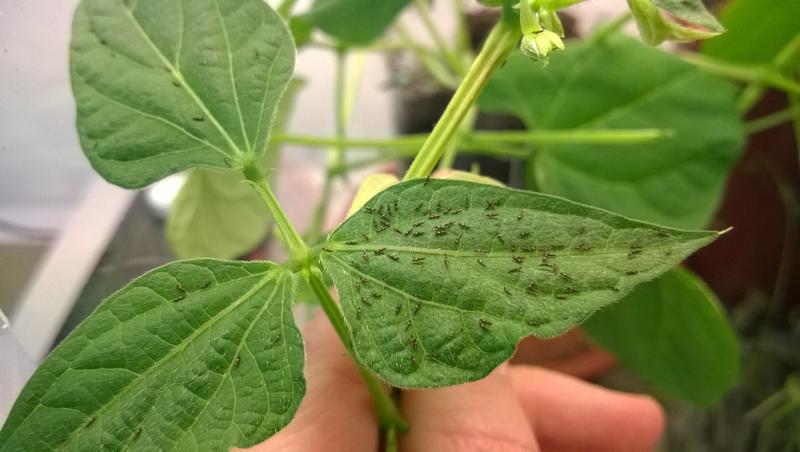