There is longstanding evidence that the presence of high levels of air pollutants in the atmosphere in particular nitrogen oxides are harmful to health causing respiratory problems and increasing the risk of a heart attack. In a current study published in the European Journal of Preventive Cardiology, scientists at the Jena University Hospital report that a rapid rise in nitric oxide levels within 24 h increases the short-term risk of a heart attack. Such dynamic changes in concentrations of air pollutants are not covered by current statutory limits.

The study results from Jena are in keeping with outcomes reported by the European Environment Agency (EEA) of loss in life years due to disease resulting from exposure to ambient nitrogen dioxide. Over 800,000 life years were lost in Europe in 2016 according to the EEA. Internal combustion engines of motorised vehicles, in particular diesel engines, and domestic heating systems are the major sources of the pollutant. Due to their negative impact on health, levels of air pollutants are closely monitored via a dense network of stations throughout Europe to ascertain that the standard 1-hour limit threshold of nitric oxides (NO_X) of 200 μg/m³ and the limit value for the annual mean nitric oxide concentration of 40 μg/m³ are not exceeded.

The recently published study from Jena shows that a rapid increase in nitric oxide levels in the air increases the risk of a heart attack. For the study, scientists’ evaluated data from 700 patients treated for acute myocardial infarction at the Jena University Hospital between 2003 and 2010. Medical data from patients was compared to emission data relating to changes in the levels of nitric oxides (NO_X/2), ozone (O₃), and particulate matter (PM₁₀) over a 24 hour period before occurrence of the first heart attack symptoms. Atmospheric pollution parameters for Jena were obtained from the Thuringia State Institute of Environment and Geology. Jena, a city in Central Germany with a population of approximately 100 000 was chosen as a study setting since with the exception of a few days per annum, it generally meets the current European threshold values for all measured air pollution parameters.

The study in Jena showed that the risk for a heart attack was directly related to the change in the level of nitric oxide in the air 24 h before the occurrence of symptoms. "This strong association surprised us as it is almost linear," said Dr Florian Rakers, senior author of the study.

Prof. Matthias Schwab, Senior Consultant at the Department of Neurology and co-author of the study explained, "The acute risk of heart attack in our study approximately doubled when the nitric oxide concentration increased by 20 micrograms per cubic meter within one day.”

“Such rapid increases in nitric oxide concentrations can occur several times a year even in supposedly clean cities, as seen in Jena and is probably due to unusually high traffic volume or to meteorological factors favouring smog development," stated Dr Rakers.

For particulate matter and ozone concentrations, the results were less clear. "Although in our study, a relationship between a rapid increase in particulate matter and ozone levels and the acute risk of heart attack was not confirmed, high concentrations of both pollutants are particularly detrimental to patients with lung diseases," emphasised Prof. P. Christian Schulze, Chair of the Department of Internal Medicine I and co-author of the study.

This study increases the knowledge on health hazards presented by nitric oxide. "The risk of a heart attack not only increases when people are exposed to high nitric oxide concentrations in the ambient air over short or long time periods, but also when the nitric oxide concentration rises rapidly. It is appears that nitric oxide presents a health threat even in “clean” environments where threshold values of air pollutants are generally not exceeded. Because of the clinical relevance of our findings, there is an urgent need for both larger scale studies and studies in other geographic regions. The knowledge could ultimately contribute to introduction of threshold values for dynamic changes in the level of air pollutants in Europe and worldwide," adds Dr Florian Rakers.

<
A rapid rise in air pollution by nitric oxide increases the risk of a heart attack.
Picture: M. Szabó/ Jena University Hospital
None

A rapid rise in air pollution by nitric oxide increases the risk of a heart attack. 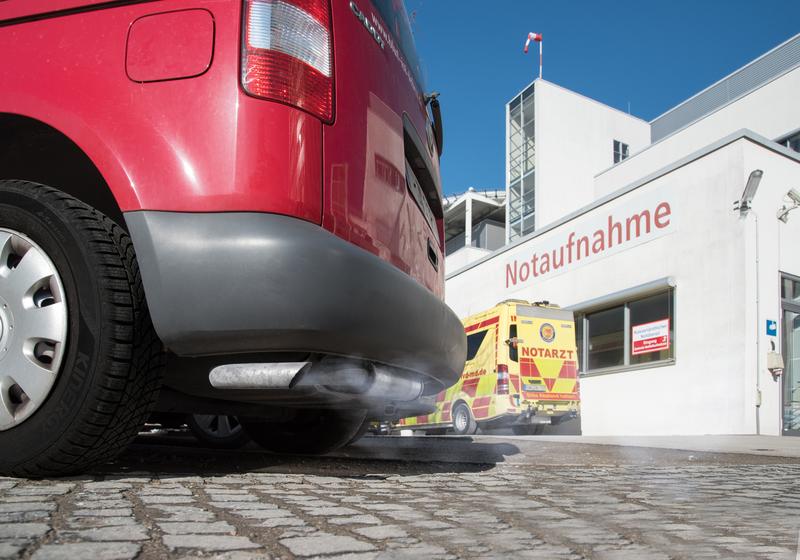