Religion and religious diversity are disputed across many European societies. A new, publicly available database produced by researchers of the University of Lucerne offers more intelligence on religious affiliation. In most European countries, the religious composition of its population is remarkably stable. However, Eastern and Western countries are drifting apart somewhat in recent times. In general, a trend of pluralisation prevails in Western Europe, whereas influential Eastern countries are becoming more homogeneous in terms of religious affiliation.

Researchers of the University of Lucerne launched a new open research data tool providing a wealth of statistics on religious affiliation for no less than 50 European or Eastern neighbouring countries. The new "Swiss Metadatabase of Religious Affiliation in Europe (SMRE)" was funded by the Swiss National Science Foundation (SNSF). For the first time, the SMRE-metadatabase provides transparent and comparable data for all European countries for two periods. Data are free of charge and open to researchers, journalists and the public.

The data recalculated by Prof. Dr. Antonius Liedhegener and Anastas Odermatt MA show an astonishing picture. Contrary to the perception of many Europeans, the religious composition of most countries measured by formal or institutional religious belonging is remarkably stable. Roughly, 70 percent of all European countries are dominated by that religious tradition which shaped the territory historically. In these countries, more than 60 percent of the population declare themselves to belong to the historically dominant religious community. However in some European countries, processes of secularisation resulted in a majority of the population declaring not to belong to any religious tradition. These countries are the Czech Republic, Estonia, the United Kingdom and France, and to a lesser extent the Netherlands, Hungary, Latvia and Germany.

In addition, the current trends are not univocal. From 2000 to 2010, the religious composition of the population became more homogeneous in the orthodox countries Russia, Belarus and Ukraine as well as in Poland, Bosnia and Herzegovina and Azerbaijan. On the other hand, some countries clearly pluralised in terms of religious diversity. This is true for all Scandinavian Protestant countries and for Albania, Moldova and Spain. In consequence, Eastern and Western Europa are drifting apart somewhat. Whether this tendency correlates with national and international political topics like EU integration, state religious policies or national identity and societal integration, remains to be seen. Based on the SMRE, solid statistics on religious affiliation can contribute to this endeavour.

The team of Prof. Liedhegener worked together with national and international partners like the ETH Zurich or the Pew Research Center in Washington DC. For programming the SMRE, the project could employ the local technological know-how of "ongoing", an IT company of Switzerland. The interactive and web-based metadatabase and its algorithm are the core of the SMRE-project.

http://www.smre-data.ch SMRE platform with information and access to the data 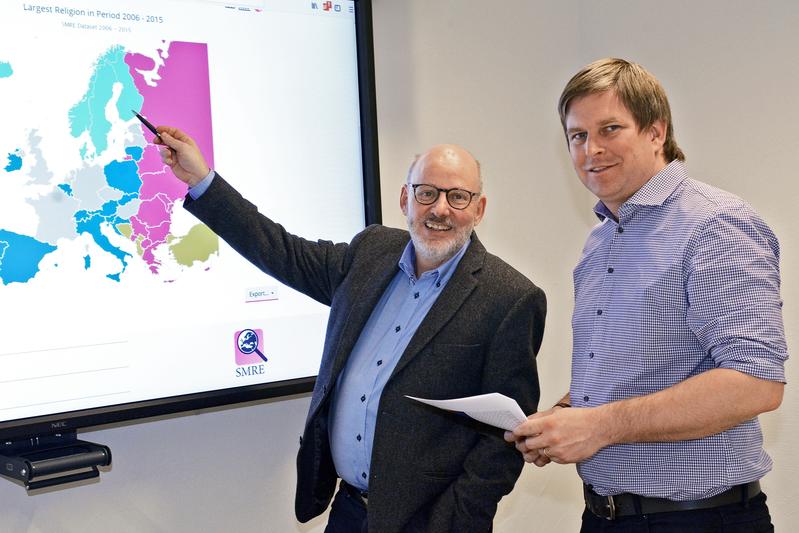