Microscopic Universe Provides Insight Into Life and Death of a Neutron

Jülich, 30 May 2018 – Experiments on the lifetime of a neutron reveal surprising and unexplained deviations. In order to address this problem of subatomic physics, a team of physicists from Jülich, the UK, and the USA created a simulation of a microscopic universe. They were thus able to calculate a fundamental natural constant of nuclear physics for the first time – a milestone in this field of research. The results of their work were published today in the renowned journal Nature.

A neutron “lives” for almost 15 minutes before it decays. The elementary particles remain stable as long as they are in the atomic nuclei. In isolation, however, they decay after just under 15 minutes into other particles – protons, electrons, and antineutrinos. To determine the lifetime of the neutrons, scientists observe either the emergence of these decay products or the disappearance of the neutrons. However, these two varying experiments deliver different results. The deviation is less than nine seconds. This might not appear to be much, but the conflicts between the experimental measurements could answer key questions about a new physics beyond the known particles and processes in the universe.

For the first time, an international team of scientists used supercomputers to calculate a quantity that is crucial for understanding the lifetime of neutrons: the axial coupling constant of the weak interaction, or gA for short. “It determines the force with which the particles are bound together in the atomic nucleus as well as the radioactive decay rate of the neutron,” explains Evan Berkowitz from the Nuclear Physics Institute (IKP). “We were able to calculate the coupling constant with unprecedented precision and our method is paving the way towards further improvements that may explain the experimental discrepancy in the lifetime of neutrons.”

Space and time on a lattice

For their calculation, the researchers turned to a key feature of the standard model of particle physics: quantum chromodynamics (QCD). This theory describes how quarks and gluons – the building blocks for nuclear particles such as protons and neutrons – interact with each other. These interactions determine the mass of the nuclear particles, the strength of their coupling, and, therefore, the value of the coupling constants.

However, QCD calculations are extremely complex. For their calculations, the researchers therefore used a numerical simulation known as lattice QCD. “In this simulation, space and time are represented by points on a lattice,” explains Berkowitz. “Through this construction, a calculation of the relations between the elementary particles is fundamentally possible – but only with the aid of powerful supercomputers.” The scientists used the Titan supercomputer at the Oak Ridge National Laboratory in Tennessee for their simulations.

The coupling constant, which previously could only be derived from neutron decay experiments, was thus determined directly from the standard model for the first time. To this end, the researchers created a simulation of a microscopic part of the universe measuring just a few neutrons wide – much smaller than the smallest atom. The model universe contains a single neutron in the middle of a “sea” of gluons and pairs of quarks and their antiparticles, antiquarks. In this microcosm, the scientists simulated the decay of a neutron to predict what happens in nature.

Berkowitz explains that this allows two results for gA from completely independent sources – those from the neutron decay experiments and those using the standard model – to be compared with each other for the first time. “Even the smallest deviations between the values could lead to new discoveries related to dark matter, the asymmetry between matter and antimatter, and other fundamental questions concerning the nature of the universe.”

“Through our simulation, we were also able to show that the lattice QCD approach can be applied to basic research on the physics of atomic nuclei,” explains Berkowitz. The methods have so far mainly been used for elementary particle physics, i.e. the physics of quarks and gluons , and of short-lived particles found in collider experiments. “These calculations ring in a new era. We can now determine parameters of nuclear physics with greater precision without having to resort to experimental measurement data or phenomenological models.”

<
A neutron decays into a proton, an electron, and an antineutrino. In the QCD lattice approach, a dis ...
Evan Berkowitz
None

A neutron decays into a proton, an electron, and an antineutrino. In the QCD lattice approach, a discrete space is used for the calculation. 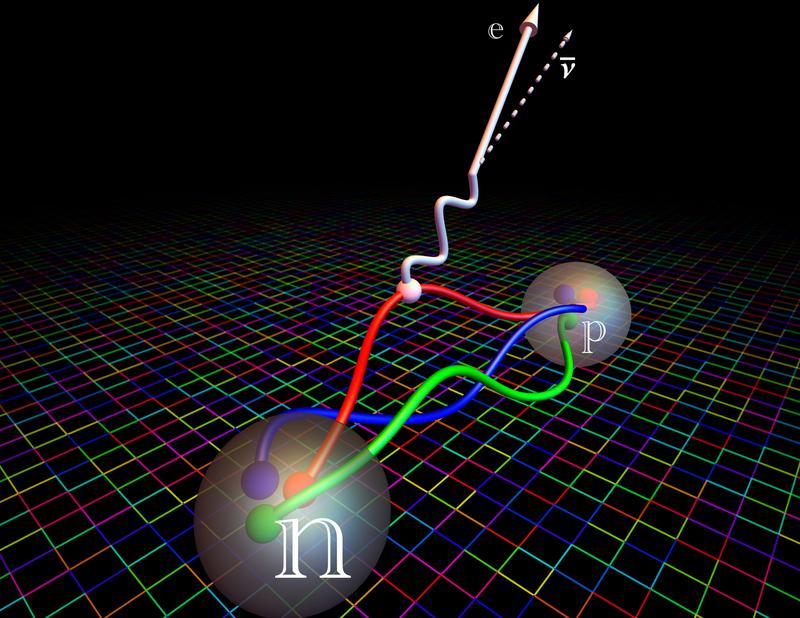