Just a few years after completing his studies, the Yemeni social media star and science communicator Hashem Al-Ghaili donated 50,000 euros to Jacobs University. This is the largest single person donation from a Jacobs Alumnus in the history of Jacobs University. After the huge success of his Facebook page, which has nearly 27 million followers, Hashem decided to give back to those who believed in him. The funds will go to the research group of his patron, Prof. Dr. Sebastian Springer, who plans to use it for the purchase of research equipment that will help advance cancer research.

"I want to say thank you for the help I received at Jacobs University," says Hashem Al-Ghaili. “The support I received from Prof. Springer contributed greatly to my success,” Al-Ghaili adds. After quitting his job in Yemen, he came to Germany in 2013 with a scholarship from the German Academic Exchange Service, however he didn’t have an admission to secure his scholarship. He sent over 100 applications to different universities and research institutions across Germany, but only received one invitation to an interview. That invitation came from Professor Sebastian Springer at Jacobs University.

After arriving at Jacobs University to do a Master’s degree in Molecular Biotechnology, Al-Ghaili was faced with yet another hurdle. Because his previous studies were mainly theoretical, he wasn’t well-trained to handle lab work independently. However, he was determined to change the situation and sought guidance from Professor Springer, who offered it without hesitation. “I had to work harder and tripled the amount of time to catch up to the level of my fellow students. Throughout my journey, Professor Springer was there to help with everything he could. I have a lot to thank him for,” says Al-Ghaili. He passed his exams with distinction and gave one of the final speeches at the graduation in 2015.

Since then he has been involved in communicating knowledge and science to the general public. With his "Science Nature Page" on Facebook he became a star with his vivid explanatory videos. Every week he reaches around 400 million users online and delivers to them videos about the latest breakthroughs from the world of science, nature and technology. As of now, his videos have garnered over 8 billion views. His activity on social media extends beyond Facebook. He is also active on Instagram, YouTube, LinkedIn and now Twitter.

Thanks to his success, the Berliner-by-choice is now in demand worldwide as a social media consultant, lecturer and public speaker. One of this latest projects include the production of a science fiction movie, which is scheduled to be screened in Berlin at the end of this year. His long term plan is to establish a non-profit foundation, called Hashem Al-Ghaili’s Foundation for Education and Innovation, which aims to support education in developing countries and to promote the use of science and rational thinking to solve complicated problems. Al-Ghaili also encourages other alumni to do similar things. "It's only fair to give something back to the university that provided much-needed support."

"Hashem's talent for communication was evident from the very beginning," says Sebastian Springer. "I am very grateful to him for the donation, which we will use to purchase protein purification equipment and thus for cancer research." Prof. Dr. Michael Hülsmann, President of Jacobs University, adds: “Hashem Al-Ghaili’s impressive story is, at the same time, a great proof for the quality of education at our University. His path in life is an example of what Jacobs University stands for: supporting talented people and helping them to succeed.”

About Jacobs University Bremen:
Studying in an international community. Obtaining a qualification to work on responsible tasks in a digitized and globalized society. Learning, researching and teaching across academic disciplines and countries. Strengthening people and markets with innovative solutions and advanced training programs. This is what Jacobs University Bremen stands for. Established as a private, English-medium campus university in Germany in 2001, it is continuously achieving top results in national and international university rankings. Its almost 1,400 students come from more than 100 countries with around 80% having relocated to Germany for their studies. Jacobs University’s research projects are funded by the German Research Foundation or the European Research Council as well as by globally leading companies. 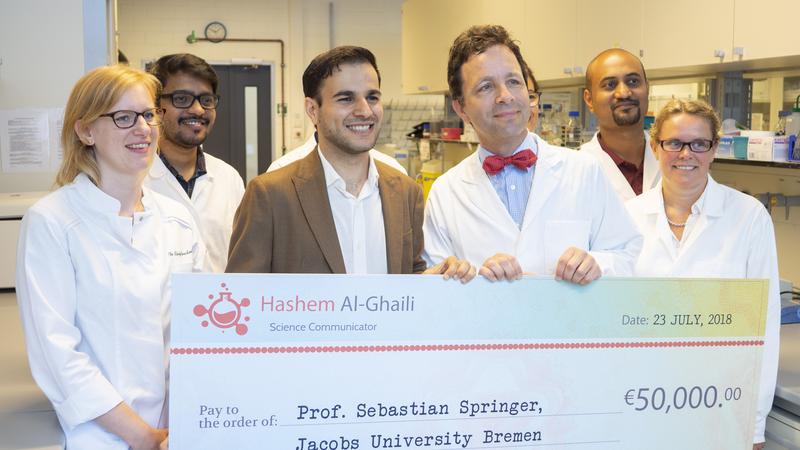