Contrary to previous studies, pigs appear to have better visual discrimination abilities than had previously been assumed. Cognition researchers from the Messerli Research Institute showed in a new study that pigs not only discriminate between front and back views of human heads but also that the animals apparently use certain facial features such as our eyes or mouth as cues. The results shed a new, more positive light on the previously rather pessimistic opinion of the visuo-cognitive abilities of these clever animals.

Recent studies have revealed that pigs have far greater learning and cognitive abilities than had long been believed. Not only are pigs curious and capable of learning, they also possess a good long-term memory, deliberately deceive other pigs, and can even anticipate needs and intentions. So far, however, researchers had failed to find evidence that these actually quite clever animals possess good visual discrimination abilities. The results of past visuo-cognitive tests, for example, whether pigs are able to visually recognize conspecifics, have so far only served to reinforce the rather pessimistic views held by veterinary researchers.

A new study conducted by cognition researchers from the Messerli Research Institute at Vetmeduni Vienna now provides a much more optimistic view of the visuo-cognitive abilities of pigs. The study shows that pigs are able to discriminate between two views of different human heads (front and back) even after the photographs are altered. This experiment shows that pigs can remember visual discriminative stimuli and respond accordingly.

Pigs may understand when we show them the cold shoulder

In a first step, two groups of pigs were trained to discriminate between the front and back of the head of ten persons. Contrary to previous trials, the pigs were shown only photos on a monitor. The subjects received a reward if they chose either the front or the back view, depending on the group. “It was important for us that the pigs focus exclusively on two-dimensional features. In this way, we could control for the previously demonstrated three-dimensional perception of pigs as well as for olfactory factors. The experiment thus challenged only the pigs’ visual discrimination, which had previously been considered not especially developed,” explains study director Ludwig Huber.

The pigs proved to be remarkably capable of learning. Already during the training, they handled the visual challenges much better than previous studies would have suggested. “Despite individual differences, the overall performance of the pigs allowed us to begin with the actual test phase relatively soon,” says Huber. The two groups of pigs were now shown new faces and posterior views. The pigs were then presented with altered photographs.

In a so-called generalization test, the two groups were shown 16 new heads in the same way as in the training. The animals mastered this task with no decline in performance, suggesting that the pigs used a general concept of the view (front or back) that had been formed during training instead of simply storing the pictures in their memory. The final tests, in which the face was inverted or certain facial features were altered, were designed to more exactly determine the nature of these visual concepts and the features used.

“In this test, comprising a total of 80 tasks, we reviewed the spontaneous discrimination of the pictures to provide clues as to the visual concepts formed during the training. This was more difficult for the Front group than for those pigs trained to recognize the back of the head,” says Huber. In this test phase, the Front group had to choose between two front views, both of which were very similar to the faces learned during the discrimination training. Only in the test condition No Eyes No Mouth, neither group was confronted with a back view.

The Back group was correspondingly more successful in making the correct choice and identifying the trained image. With the exception of the final test series, they made the correct first choice in more than 80 percent of the combinations shown. The results for the Front group, by contrast, showed no preference. They chose the correct photo only 50 percent of the time. In the final test, in which both groups were confronted with front views without eyes and mouth, the Back group did not show a preference either.

This could indicate that both groups base their decision on certain features. “Especially those animals that were trained to choose the back view might have memorized the eyes as a distinguishing feature and therefore chose the other picture. The same could hold true for the group trained to choose the front view. If the feature that was used as a discriminatory cue is missing or changed, then the pigs will decide differently. The result is therefore an important indication that pigs, contrary to previous studies, do in fact possess visual discrimination abilities, and on top of this also manage open-ended categorization,” explains Huber. The pigs showed quite different preferences as to the discriminatory cues used, which indicates a very flexible, individual approach to solving specific tasks. These findings suggest that stimulating different senses, especially visual, constitutes a kind of cognitive enrichment that could play an important role in improving the welfare of domestic pigs living in housing systems.

About the University of Veterinary Medicine, Vienna
The University of Veterinary Medicine, Vienna in Austria is one of the leading academic and research institutions in the field of Veterinary Sciences in Europe. About 1,300 employees and 2,300 students work on the campus in the north of Vienna which also houses five university clinics and various research sites. Outside of Vienna the university operates Teaching and Research Farms. The Vetmeduni Vienna plays in the global top league: in 2018, it occupies the excellent place 6 in the world-wide Shanghai University veterinary in the subject "Veterinary Science". http://www.vetmeduni.ac.at

About Messerli Research Institute
The Messerli Research Institute was founded in 2010 with support from the Messerli Foundation (Sörenberg, Switzerland) under the management of the University of Veterinary Medicine, Vienna in cooperation with the Medical University of Vienna and the University of Vienna. The research is devoted to the interaction between humans and animals, as well as its theoretical principles in animal cognition and behavior, comparative medicine and ethics. Its work is characterized by its broad interdisciplinary approach (biology, human medicine, veterinary medicine, philosophy, psychology, law) and strong international focus. http://www.vetmeduni.ac.at/en/messerli/

<
Using distinct cues like a mouth or nose, pigs are able to memorize our face.
Messerli Research Institute/Vetmeduni Vienna

<
This visual cognitive ability allows pigs to discriminate between the front and back of our head.
Messerli Research Institute/Vetmeduni Vienna

Using distinct cues like a mouth or nose, pigs are able to memorize our face. 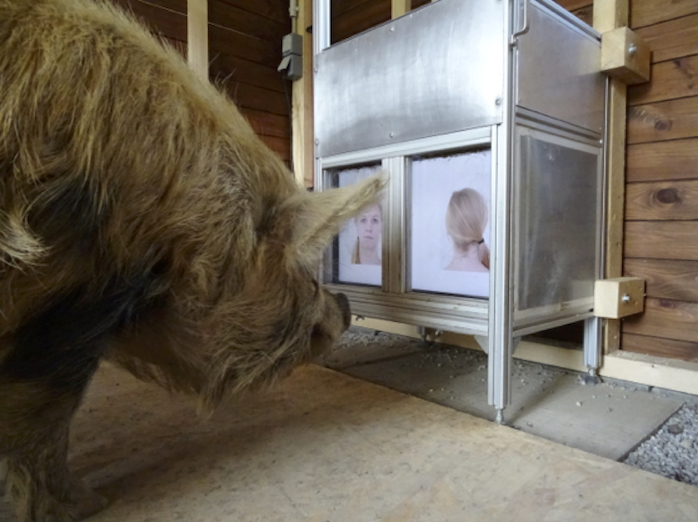 This visual cognitive ability allows pigs to discriminate between the front and back of our head. 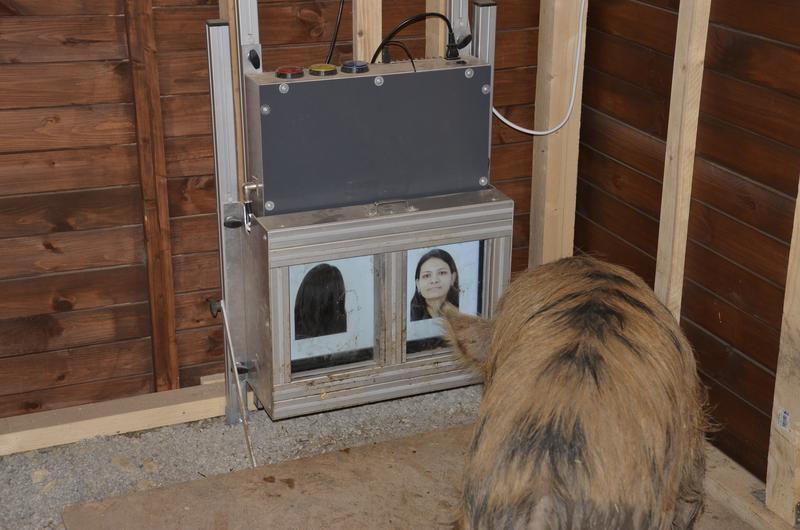