Sensory Perception Is Not a One-Way Street
Erweiterte Suche ?

Home > Pressemitteilung: Sensory Perception Is Not a One-Way Street

Sensory Perception Is Not a One-Way Street

When we interact with the world, such as when we reach out to touch an object, the brain actively changes incoming sensory signals based on anticipation. This so-called ‘sensory gating’ has now been investigated by neuroscientists at the University of Tübingen. In rats touching objects with their whiskers, they found that these touch signals from active sensory perception were reduced by gating signals from higher brain areas. This way, sensory perception may be shaped by expectations generated in the higher brain. Such anticipatory signals could have important implications in understanding sensory hallucinations such as those encountered in schizophrenia. The study, which has been realized with the help of funds from the German Research Foundation (DFG), has been published in Nature Communications.

It is one of those things that children ask their parents and that have parents scratching their heads: Mommy, why can’t I tickle myself? Even the most ticklish among us will have noticed that this is not possible. The reason for this has been known for a long time: touch receptors in the touched part of skin may feel the touch just as any other, but somewhere along the way to higher brain areas where this touch is ‘perceived’, the feeling is altered. This is because when our finger touches our own skin, our brain anticipates the touch and reduces the signal. This phenomenon is called sensory gating.

Sensory gating has attracted much interest in different branches of neuroscience and psychology. There is evidence that schizophrenic disorders impair sensory gating, leading to hallucinations where one’s own voice seems to be that of somebody else. The phenomenon addresses the philosophical question about how we construct our world at the most basic level: do we faithfully represent stimuli from the outside world, or do we have preconceptions about the world that we use like a template, only noticing when they fail to account for what we see or feel? Psychology has found evidence to support both lines of arguing.

“The reason these questions are so hard to answer is because the predictions that the brain generates are very difficult to pinpoint”, says Cornelius Schwarz, head of the “Systems Neurophysiology” group at the University of Tübingen’s Werner Reichardt Centre for Integrative Neuroscience (CIN) / Hertie Institute for Clinical Brain Research (HIH). ‘We know that in active perception, somewhere along the line, signals are gated. But where that gating originates, at what point the signals coming from the sensory organs are intercepted and what neuronal pathways these signals take, are questions we have spent years trying to answer.’

To address these questions Schwarz and Shubhodeep Chakrabarti, who was awarded a DFG inde-pendent investigator grant to lead the project, investigated the rat’s whisker system. With their whiskers, rats actively feel their surroundings, detecting obstacles and navigating even in completely dark environments. Chakrabarti and Schwarz now let their rats detect an object using just a single whisker. Then, in some trials the object was moved to touch the whisker (passive perception), while in others the rat would only detect the object by moving its whisker (active perception). During each trial, they recorded the activity of individual cells in the rat’s brainstem using hair-thin implanted elec-trodes. Whenever the rat actively touched the object, recorded signals were much weaker than in those cases where the object was touched passively: sensory gating was thus clearly shown to be at work in the brainstem.

“It is extremely interesting that sensory gating actually happens in the brainstem, and not further along the neuronal pathway into the brain”, says Chakrabarti. “We would not necessarily have ex-pected the sensory signal to be intercepted and modulated this early.” Furthermore, the scientists were able to show where the gating originates: in the so-called primary somatosensory cortex. This higher brain area is situated on top of the brain and is present in both rats and humans. It is respon-sible for our perception of pressure, temperature, and some aspects of pain. In rats whose soma-tosensory cortex was damaged, sensory signals recorded in the brainstem were not gated.

Chakrabarti explains what this means: “The somatosensory cortex, where feeling takes place, modi-fies its own input by sending out a gating signal which predicts expected touch, ahead of time, all the way out to the brainstem. Then, when the actual signal from the whisker arrives to tell the soma-tosensory cortex ‘attention, we just detected an object!’, it has to pass through the brainstem. There, a temporary gate or checkpoint puts a label on the signal: ‘this detection was expected to a degree, it is of limited importance.’ Clearly, sensory perception is not a one-way street.”

Chakrabarti and Schwarz are now already engaged in a host of follow up questions. They want to study the effects of attention and motivation next: does the somatosensory cortex also gate signals if there is a reward at stake? Could it be that, if the subject focuses intensely on relevant signals, gating will result in signal enhancement rather than reduction? If so, it could mean that cognitive functions such as desires and expectations have a very large influence on our perception of the world.

<
With their whiskers rats actively feel their surroundings.
Photo: University of Tübingen

With their whiskers rats actively feel their surroundings. 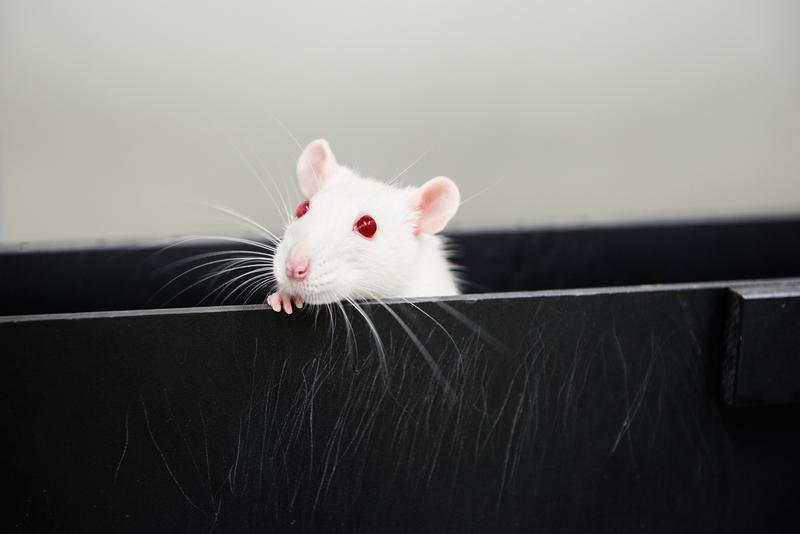