Every year, the company ImmunoTools announces an award on molecular biology research, the "ImmunoTools Award", for which researchers worldwide can apply. Amongst this year’s winners are Dario-Lucas Helbing and Leopold Böhm, both MD students at the Leibniz Institute on Aging – Fritz Lipmann Institute (FLI). They applied for the award as part of their Masters’ program “Molecular Medicine”. With this prize, they now have the possibility to focus their research on the aging nervous system and the interaction of cells during aging.

Jena. In growing age, neurodegenerative diseases occur more frequently, causing immense costs for long-lasting treatments or special care. Regarding our aging population, this is a problem that is enormously important not only for patients and their families, but also for society.

The Morrison Research Group at the Leibniz Institute on Aging – Fritz Lipmann Institute (FLI) was able to identify Cytokines in several projects that are likely to play a central role in peripheral nerve aging. To investigate connections between various factors circulation in the bloodstream and nerve aging more in detail, as well as carry out experiments with nerve and non-nerve cells, they submitted their project idea to participate in the international competition “ImmunoTools Award 2018” of the company ImmunoTools.

„We are really happy to receive this award and that our project idea has been selected“, says Dario-Lucas Helbing. Together with his colleague Leopold Böhm, he recently started the Master's program "Molecular Medicine" for highly motivated medical students at the Friedrich Schiller University in Jena, which not only offers them the opportunity to do their doctorate, but also improves their position in scientific competition. With the provided ImmunoTools products both medical students will now concentrate on the aging nervous system and investigate the interaction of cells in the nervous system and consequences of maladjustments in cellular communication during aging more closely.

„We already know that in aging nerves chronic inflammations can occur, which impair nerve regeneration“, explains Leopold Böhm. This phenomenon is already known from other organs as “InflammAging”. “To better understand this process, our research group investigates the network of cytokines between glial cells, neurons and the immune system in old mice in detail. Our vision is to use our knowledge to block potentially disruptive cytokines, thus combating disorders of the nervous system in older people.”

With their research approach, they follow up a recent study of the Morrison Group published in the journal Aging Cell. Here the researchers investigated regeneration and maintenance of peripheral nerves during aging. They were able to show that nerve regeneration is impaired in old age and that more macrophages, so-called inflammatory cells, are increasingly stored, which lead to a permanent inflammation.

During this latent inflammatory process, more proinflammatory cytokines are released, which lead to chronic diseases in older people. They were able to identify two Cytokines, which were upregulated in old nerves and play a crucial role in inflammation: CCL 2 and CCL 11. This is an indication that the newly found cytokines are associated with aging and regeneration processes.

“This award enables us to investigate the communication of different cells of the nervous system during aging,” say both awarded MD students. With the “prize” in the form of provided reagents, the young researchers can investigate, which cytokines have an influence on the ability of nerve cells to regenerate and to maintain. Their overall goal is to improve nerve regeneration in old age.

Award winners of the ImmunoTool Award 2018: Dario-Lucas Helbing and Leopold Böhm, medical students of the Friedrich Schiller University Jena and doctoral students at the Leibniz Institute on Aging. 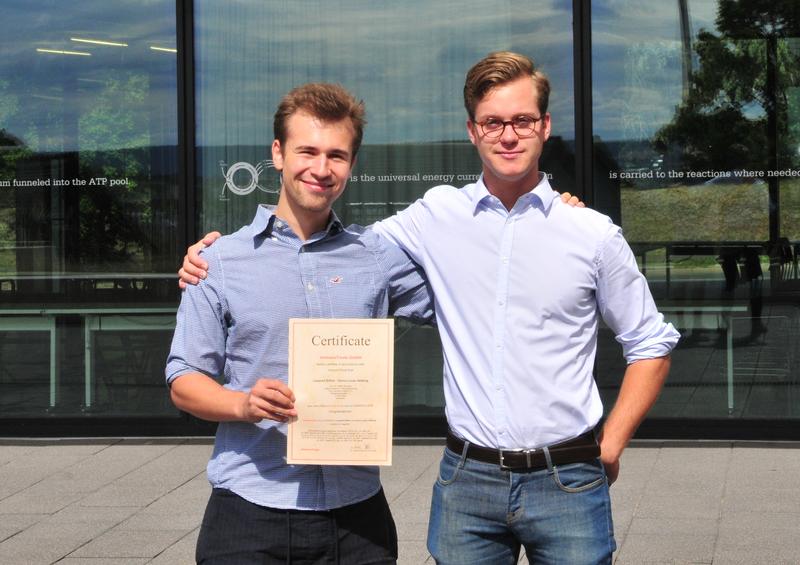