Elucidating the Atomic Mechanism of Superlubricity

Tribology: Design Rules for Extremely Low Coefficients of Friction
(Dresden, January 11, 2019) The phenomenon of so-called superlubricity is known, but so far the explanation at the atomic level has been missing: for example, how does extremely low friction occur in bearings?

Researchers from the Fraunhofer Institutes IWM and IWS jointly deciphered a universal mechanism of superlubricity for certain diamond-like carbon layers in combination with organic lubricants. Based on this knowledge, it is now possible to formulate design rules for supra lubricating layer-lubricant combinations. The results are presented in an article in Nature Communications, volume 10.

One of the most important prerequisites for sustainable and environmentally friendly mobility is minimizing friction. Research and industry have been dedicated to this important project for years. Superlubricity could achieve not only minor, but also extreme friction reductions. If, for example, friction in the engines and transmissions of vehicles is reduced to minimum values, such as those occurring with superlubricity, annual global CO2 emissions could be reduced by several hundred million tons. Two Fraunhofer Institutes have taken an important step toward this vision. In the PEGASUS II project funded by the Federal Ministry of Economics and Energy (BMWi), scientists from the Fraunhofer Institute for Mechanics of Materials IWM in Freiburg and the Fraunhofer Institute for Material and Beam Technology IWS in Dresden have uncovered the atomic mechanism underlying superlubricity in a special friction partner system. They investigated promising tribological systems in which the friction partners’ surfaces consist of special diamond-like carbon layers produced with a coating technology developed at the Fraunhofer IWS. These so-called tetrahedral amorphous carbon layers (ta-C) were combined with organic lubricants. Using simulations, the research team found out that the lubricant decomposes tribochemically to form graphene-like surfaces: the prerequisite for superlubricity.

Dr. Volker Weihnacht, Head of Carbon Layer Department, and Stefan Makowski, Group Leader Coating Properties at Fraunhofer IWS, systematically investigated the interaction of lubricants with ta-C carbon surfaces. Unsaturated fatty acids or glycerol achieved extremely low coefficients of friction at the superlubricity level. They were astonished by
two things: that this effect did not occur with the smallest changes in the molecular structure and that the friction was much higher. Thus, saturated fatty acids and alkanes did not achieve a superlubricity effect.
Prof. Michael Moseler and Dr. Gianpietro Moras at the Fraunhofer IWM explained the reason for this: “Using quantum chemical simulations, we were able to demonstrate that lubricant molecules with at least two reactive centers are able to form a chemical bond simultaneously with both ta-C-coated surfaces and are torn apart by the sliding motion and broken down into their constituent parts,” explains Prof. Moseler, head of the “Multiscale Modeling and Tribosimulation” group. This allows for the release of the lubricant’s oxygen atoms and for these to be incorporated into the ta-C film. The oxygen disturbs the three-dimensional tetrahedral carbon network and aids in the formation of graphene-like surfaces, which effectively suppress friction as well as wear and thus ensure superlubricity.
Corresponding simulations with alkanes or saturated fatty acids as lubricants did not show these mechano-chemical processes because they have no or only one reactive center. “These lubricants only adhere to one surface and form a molecular brush – which reduces friction, but not at the superlubricity level,” says Prof. Moseler. The newly discovered design rule states that several reactive centers must be present in the lubricant to cause superlubricity. “Of course, this rule is not limited to the fatty acids investigated here, it can also be transferred to other lubricants,” Prof. Moseler adds.

Guidelines for the Novel Lubricants’ Design

The research team’s results allow both predicting tribological properties of ta-C surfaces lubricated with different molecule types and forming guidelines for the novel organic friction modifiers’ design. Predictions for tailoring the carbon layers themselves and the necessary supra lubricant design rules for other surfaces, such as steel or aluminum, also become conceivable projects. In 2019, the scientists at the Fraunhofer IWM and IWS will continue to work with industrial partners on translating quantum chemical findings into engineering solutions as part of the PROMETHEUS project with financial support from BMWi. Their goal: further reducing friction in combustion engines as well as other applications. 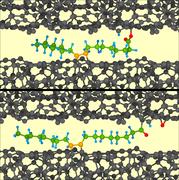 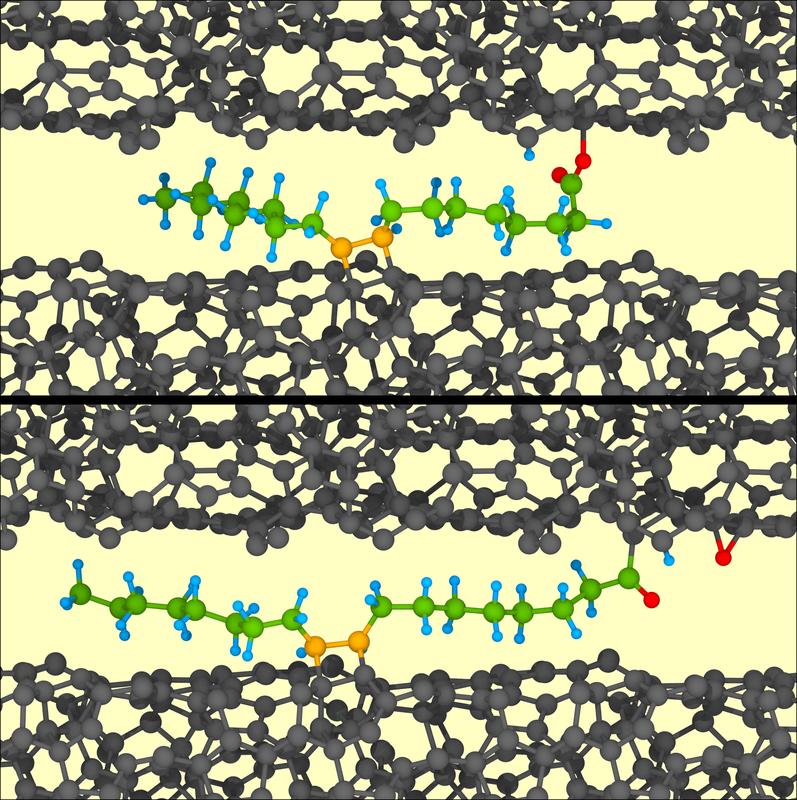 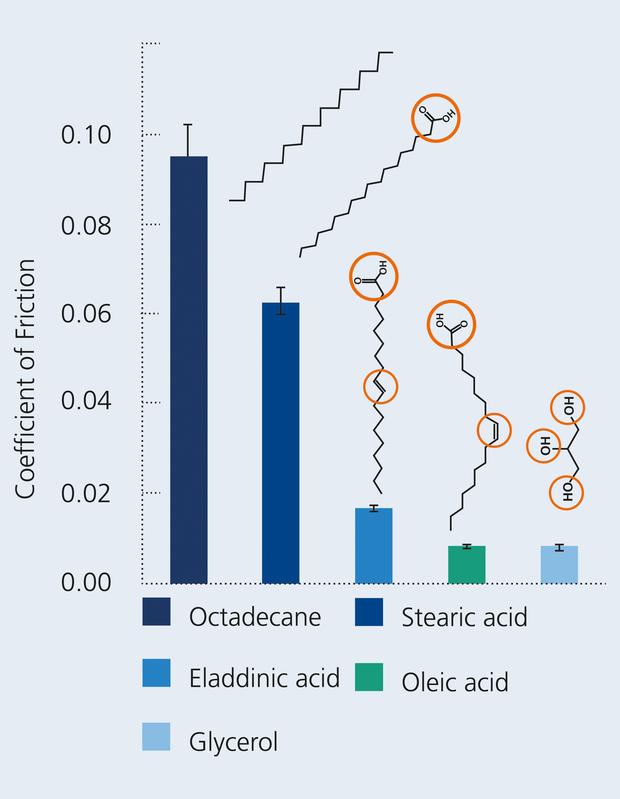