In the world's oceans, there are several large oxygen-depleted areas that scientists refer to as oxygen minimum zones (OMZs). These oceanic regions can encompass millions of square kilometres, and particularly occur where an intense ocean current and prevailing wind direction meet a broad coastline perpendicularly. Among other things, these flow conditions cause coastal upwelling, i.e. the upward movement of nutrient-rich deeper water. This in turn promotes the mass occurrence of oxygen-consuming microorganisms in the layers of water below the surface, which reduces the level of oxygen in the ocean. Such conditions occur, for example, in the Pacific Ocean off the west coast of South America, in line with Peru. A particularly extensive OMZ has formed here. A research team from the Collaborative Research Center 754 (SFB 754) "Climate-Biogeochemistry Interactions in the Tropical Ocean", a cooperation between Kiel University (CAU) and the GEOMAR Helmholtz Centre for Ocean Research Kiel, investigated the foraminifera, which are unicellular shell-forming microorganisms occurring throughout the ocean, in a new physiological study. Some species of foraminifera are adapted to oxygen-depleted environments as in the Peruvian OMZ. In this way, the scientists could improve our understanding of their metabolic processes, and thus extend the basis for quantifying the nitrogen cycle in the low-oxygen ocean. The researchers published their results in the journal Proceedings of the National Academy of Sciences (PNAS) yesterday.

The respiration of foraminifera
The Peruvian OMZ extends vertically from just below the water surface down to about 600 meters in depth. Depending on the depth of the water, little or no oxygen is present. These living conditions favour organisms which thrive either in the absence of oxygen or at varying levels of oxygen, such as various types of foraminifera. Depending on availability, they can "breathe" both oxygen as well as nitrate. As such, nitrate respiration goes hand in hand with the process of denitrification: this is the conversion of nitrate present in the water into molecular nitrogen in the absence of oxygen. The mass occurrence of foraminifera in the OMZ suggests that they play an important - but previously difficult to quantify - role in the nutrient cycle of these marine regions. “To better understand the role of foraminifera in the nutrient budget of the OMZ, we examined more closely the relationship between growth and denitrification rate of these organisms," explained Professor Tal Dagan from the Institute of General Microbiology at the CAU and co-author of the study.

Foraminifera prefer nitrogen to oxygen
The researchers determined the relationship between the metabolic activities of foraminifera and their size - or more precisely, the volume of their cells. In doing so they discovered that the studied OMZ foraminifera become bigger with increasing nitrate concentrations even in the absence of oxygen, and with that increasing cell volume they can also convert more nitrate. In contrast, the previous assumptions regarding the physiology of unicellular organisms with a nucleus, including foraminifera, suggested that the organisms in the OMZ should actually be smaller: with the decrease in oxygen supply, their metabolism should only be maintained with a smaller volume to surface ratio of their cells. Now, the Kiel scientists were able to resolve this contradiction: the analysed microorganisms from the OMZ do not prefer an environment with oxygen, as previously assumed. Instead, their primary metabolic pathway is nitrate respiration. "In fact, our investigations show that the foraminifera in the OMZ become bigger with increasing nitrate concentrations," said CAU marine biologist and co-author Dr Alexandra-Sophie Roy. "It seems that foraminifera do not prefer an oxygenated environment as previously assumed, or that they only switch to nitrate respiration in case of emergency. It rather seems that an environment without any oxygen is their natural preference," continued Roy.

An oxygen minimum zone in a test tube
In order to examine the metabolic pathways of the organisms, the researchers had to incubate living foraminifera in the laboratory. They obtained the organisms from sediment samples from Peruvian research area, via core sampling from the ocean floor. "Since the foraminifera in the Pacific off Peru have very specific living conditions, we had to simulate these parameters in the laboratory," said Dr Nicolaas Glock, leader of this study, from the Marine Geosystems research unit at GEOMAR, and a member of the SFB 754. "To reproduce the conditions, I worked in a cold room mimicking the ocean temperatures at 300 meters, and also precisely adjusted the salinity, nitrate and oxygen content of the experimental media”, continued Glock. He used a procedure that removes the oxygen from the seawater in a tiny glass container, a so-called cuvette, to simulate the oxygen depletion in the OMZ. He surrounded the investigated water samples containing living foraminifera with a vitamin C solution that was separated from the specimens by a thin silicon membrane. The oxygen slowly diffused through the membrane and was trapped within the Vitamin C solution. In this way, it was possible to reproduce the environmental conditions in the OMZ in the laboratory, and thereby characterise the physiological adaptations of the foraminifera to anoxia.

The influence of marine nutrient cycles on the fishing industry and climate
In the future, the theoretical basis for denitrification rates of foraminifera, described by the Kiel researchers could help to develop more accurate models of the nutrient cycles. In particular, nutrient cycling plays an important role in the oxygen minimum zones: accurate models for nutrient cycling are fundamental for our understanding of marine primary production, such as plankton growth. This in turn is the basis of the food chain in the ocean, and ultimately of all fishing yields. As such, OMZs represent only about 0.1 percent of the global ocean surface, but yield around 18 percent of global fishing. Since the OMZs may have expanded due to human influence in the last 60 years, a detailed understanding of the nutrient cycle in these regions is of particular importance. In the context of climate change, it is also becoming increasingly important to be able to quantify climate-relevant substances and their levels in the OMZs more precisely in the future. "Only with models based on realistic quantities can future predictions be made about the quantities of the important nutrient nitrate in the low-oxygen ocean, or the amount of CO2 release taking place there," said Professor Andreas Oschlies from GEOMAR, and speaker of the SFB 754. "With their newly-presented research, the scientists involved have established a very good basis for better forecasts, which now also takes into account the important role of a widespread group of organisms in the nitrogen cycle," continued Oschlies.

About the CRC 754:
The Collaborative Research Centre 754 (SFB 754) "Climate and Biogeochemical Interactions in the Tropical Ocean" was established in January 2008 as cooperation between Kiel University and the GEOMAR Helmholtz Centre for Ocean Research Kiel. The SFB 754 investigates changes in ocean oxygen content, their potential impact on oxygen minimum zones and the consequences for the global interaction of the climate and biogeochemistry of the tropical ocean. The SFB 754 is funded by the German Research Foundation (DFG) and is in its third phase (2016-2019).

Photos are available to download:
https://www.uni-kiel.de/fileadmin/user_upload/pressemitteilungen/2019/33-glock-p...
Caption: One of the organisms involved in the metabolic processes of the nitrogen cycle present in the oxygen minimum zone off Peru is the foraminifera species Uvigerina peregrina.
© Dr Nicolaas Glock

https://www.uni-kiel.de/fileadmin/user_upload/pressemitteilungen/2019/33-glock-p...
Caption: The researchers obtained the foraminifera investigated from such polycarbonate core tubes taken from the Pacific seabed at a depth of approximately 500 meters.
© Prof. Tal Dagan

https://www.uni-kiel.de/fileadmin/user_upload/pressemitteilungen/2019/33-glock-p...
Caption: Some specimens of the studied species Uvigerina striata sieved out of the sediment using sieves of various sizes.
© Prof. Tal Dagan

https://www.uni-kiel.de/fileadmin/user_upload/pressemitteilungen/2019/33-glock-p...
Caption: The researchers studied the physiology of the foraminifera in cuvettes, in which a tiny sensor measures the oxygen concentration of the water inside, among other factors.
© Prof. Tal Dagan

<
One of the organisms involved in the metabolic processes of the nitrogen cycle present in the oxygen ...
© Dr Nicolaas Glock

One of the organisms involved in the metabolic processes of the nitrogen cycle present in the oxygen minimum zone off Peru is the foraminifera species Uvigerina peregrina. 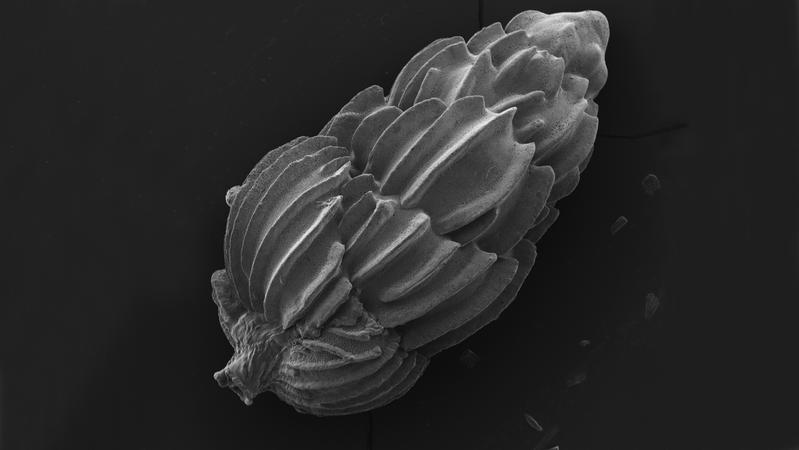 Some of the scientists involved, Tanita Wein, Dr Alexandra-Sophie Roy and Dr Julia Weißenbach (from left to right) sample sediment obtained from the ocean floor off the Peruvian coast. 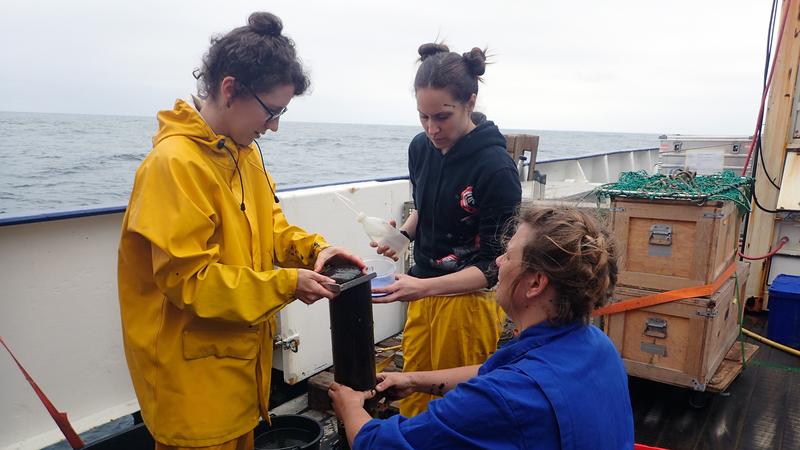