Using extremely short bursts of light, precisely shaped in a custom-cut gold antenna, an international research team from Germany, The Netherlands, Russia, and the US has switched the magnetization state of a solid faster and more efficiently than ever before. Their key achievement could pave the way towards a novel kind of nearly dissipation-free information technology. The results are published in the current issue of the top-tier journal Nature.

Modern electronics has to be ever faster and more compact. Yet this challenge comes with a fundamental predicament: Performing a task more rapidly costs more energy. State-of-the-art technology allows for reading and writing information on a hard disk drive at a rate of up to one billion (109) bits per second. The binary information (0 or 1, respectively) is encoded in the orientation of tiny magnetic moments called spins. A magnetic read/write head is used to set or retrieve the information. While this scheme has defined large-scale magnetic data storage for more than six decades, it is facing fundamental limitations regarding energy efficiency and speed. Already now, data centers around the world are responsible for 5 % of the world’s electricity consumption – a staggering and continuously increasing figure. In light of this, it may sound like a dream that the laws of physics do not prohibit ultrafast and almost dissipation-free information processing.

Researchers around Dr. Christoph Lange and Prof. Dr. Rupert Huber (Department of Physics, University of Regensburg) as well as Dr. Rostislav Mikhaylovskiy, Prof. Dr. Alexey Kimel (Radboud University, Nijmegen, The Netherlands) and Prof. Dr. Anatoly Zvezdin (Institute of the Russian Academy of Sciences, Moscow, Russia) have now made a large leap towards ultrafast information storage with minimal energy dissipation. In principle, low-energy electromagnetic pulses in the far infrared - the so-called terahertz spectral range – should allow for steering spins from one stable configuration to another to encode information in the shortest possible time, and at the minimal possible expense of energy. So far, however, even the strongest sources of terahertz radiation did not provide sufficiently strong fields to achieve this goal. “It has been possible for a few years to wobble spins around a little bit, but pushing them hard enough to fully reverse their orientation had remained impossible”, as Stefan Schlauderer, PhD student and first author of the study, explains.

The international consortium cut the Gordian knot by combining the expertise of the Nijmegen group on a material class called antiferromagnets with the ability of the Regensburg group to control solids with the help of custom-tailored terahertz electromagnetic waveforms faster than even a single oscillation cycle of light. The international team utilized a novel interaction mechanism which efficiently couples the spin motion to terahertz electric fields. In order to reach sufficient field strengths they used a trick from cutting-edge nanooptics. They developed and fabricated a very small antenna which strongly concentrates and thus enhances the terahertz radiation. With this structure, the force on the spins exerted by the terahertz pulses was strong enough to change the structure’s magnetic orientation within just a few picoseconds (millionths of a millionths of a second) while requiring only a single quantum – a photon – of the terahertz light field, per spin.

Their scheme not only surpasses the speed of existing technologies by a factor of more than 1000, it furthermore sets a new record in terms of energy efficiency. “The amount of energy put into the switching process is spot-on, which allows for virtually frictionless spin motion. Our approach thus bears potential for quantum information processing”, Dr. Lange details. The results are a key step towards a new generation of information technology which aims to simultaneously enable maximal energy efficiency and speed.

Using ultrashort pulses of light enables extremely economical switching of spins within a few picoseconds from one stable orientation (red arrow) to another (white arrow). 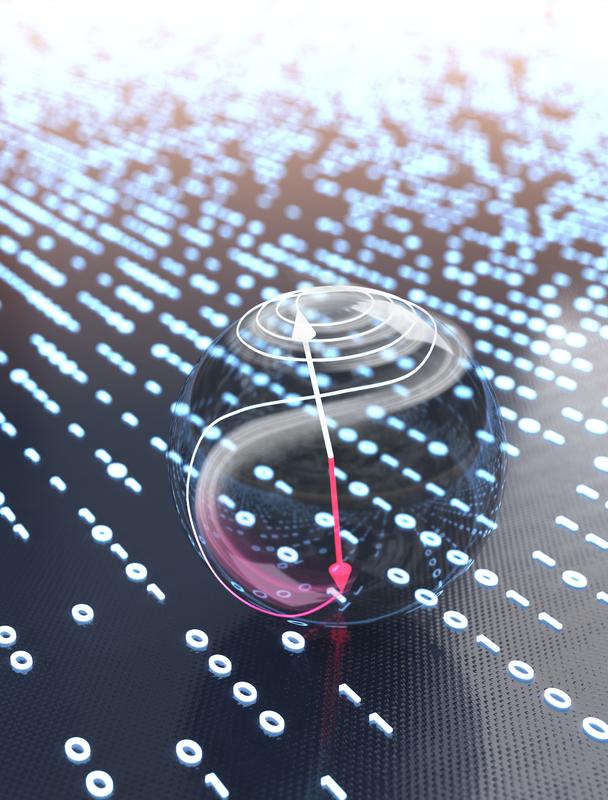