Home > Pressemitteilung: Good is relative – for ants as well ...

Good is relative – for ants as well as humans

For people, almost everything is relative. How we judge our salaries, our governments, and our partners is to a large degree dependant on how they compare to our expectations or experiences. Now, researchers in Germany have demonstrated that ants, just like us, judge value relative to their expectations.

In the old days, traditional economics assumed that value was fixed – a Euro is worth what you can buy with it, for example a bottle of beer. However, the world of classical economics was shaken when psychologists began testing these assumptions. Very soon it became clear that people are strongly swayed by – sometimes arbitrary – reference points. In 2002, Daniel Kahneman received a Nobel Prize for his work demonstrating such relative judgements of value. Now, researchers are beginning to question whether this is a uniquely human trait.

“Ants have brains smaller than the tip of a pin” says Stephanie Wendt, who carried out the research, “yet they are very fast learners, and can quickly memorise a route, or learn that a certain smell means that food is coming. We wanted to know if these memories can affect how they rate food quality”. She trained ants to expect very sweet or slightly sweet food, and once the ants had learned to expect one sweetness, she gave them another. “In the end, all the ants got exactly the same moderate food quality, so they should all have shown the same reaction to it. But they didn’t.” Ants which expected high quality food often rejected moderate quality food, while ants expecting poor food were very happy to accept the moderate quality. Not only that, but their enthusiasm with which they told their sisters about the food, by laying a trail of pheromones, was directly linked to their expectations.

Amazingly, just as in humans, what the other ants in the colony are getting also influences ants’ own judgements.“ People judge how well they are paid mostly based on what their peers are paid” says Dr. Tomer Czaczkes, who led the study. “The ants seem to do something similar.” When an ant brings food back to the nest, it shares it with other ants, who might then go out to find the food themselves. “If the ant had just received some good food from another ant, she will likely reject moderate quality food. But if she had received poor food, she’ll be very happy to take the mediocre stuff”.

Studying humans is great, but in some ways it can also be very challenging. For example, individual cultural or educational background may affect behaviour in economic experiments. “Economics students, for example, often respond in a different way than other groups in experiments” said Prof. Dr. Andreas Roider, a microeconomist who also took part in the study. “Working with ants is quite an unusual thing for an economist to do, but it definitely is a refreshing take on how we go about understanding economic behaviour”.

Ants may not run the world – yet – but they are more similar to us than we might think.

<
Ants at intake of food
A. Koch
None

Ants at intake of food 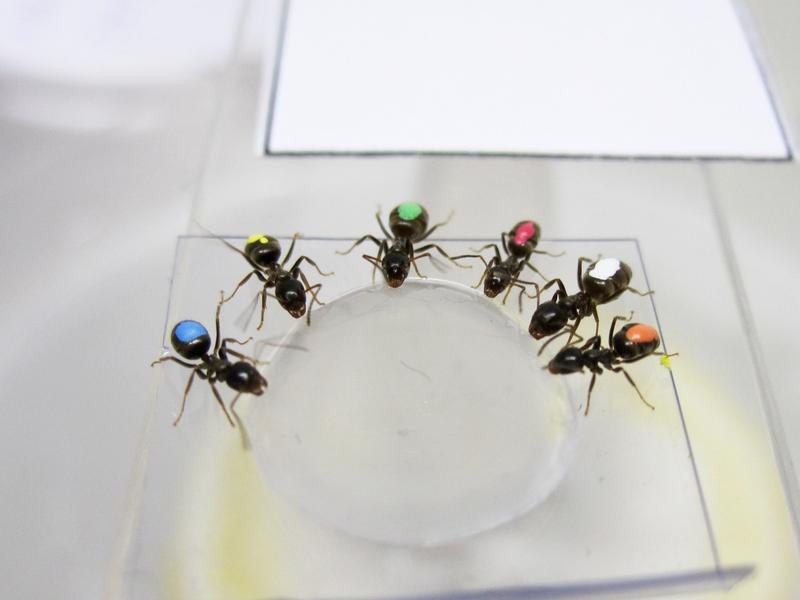