Yersinia have spread fear and terror, especially in the past, but today the plague pathogens have still not been completely eradicated. The bacteria inject various enzymes, including the enzyme YopO, into the macrophages of the immune system. There it is activated and prevents the defense cells from enclosing and digesting the plague bacteria. Using the latest methods, scientists from the Institute of Physical and Theoretical Chemistry at the University of Bonn have now deciphered how YopO changes its shape and thus contributes to confusing the immune system. The results have now been published in the journal "Structure".

Yersinia also includes the plague pathogen, which caused fear and terror worldwide until the discovery of antibiotics. The major epidemics are over, but the World Health Organization (WHO) reported a total of 1451 deaths in 21 countries between 1978 and 1992. Plague bacteria are also found in wild rodents. The transmission occurs mainly via fleas, but also via droplet infection. "Yersinia trick the macrophages of the immune system," says Dr. Gregor Hagelüken from the Institute of Physical and Theoretical Chemistry at the University of Bonn.

The structural biologist has already done research in Yersinia as a PhD student at the Helmholtz Centre for Infection Research in Braunschweig. The special feature of the plague pathogens is a kind of syringe with which they inject the YopO and some other enzymes into the macrophages of the immune system. However, YopO only becomes active when it binds to the actin of the scavenger cell. Normally, the structural protein actin helps the phagocyte to form protrusions with which it flows around the pathogens and then disolves them into small pieces. During this process, the macrophage calls for help from other defense cells.

YopO disrupts the communication of the immune system

"As soon as YopO has bound to the actin, however, it helps to disrupt communication within the macrophage - it can no longer attack," reports Hagelüken. "The Yersinia remain ultimately undisturbed." Researchers have been wondering for quite some time how YopO is activated by binding to actin, thus turning on the switch for the dramatic progression. "Scientists at Oxford University and the National University of Singapore deciphered the structure of the actin-bound YopO as early as 2015," reports Hagelükens colleague and lead author Martin F. Peter. However, the structure was a kind of "still image": it was not recognizable how the YopO changes its shape when it binds to the actin.

"Enzymes are not stiff structures but have several mobile `hinges´ with which they can change their shape," explains Hagelüken. The researchers wanted to take two "snapshots": One of YopO alone and in a second pass one of the YopO/actin complex. These "before and after images" should show how the two partners change their shape as a result of the complex formation. "This idea was a challenge because the normal method of crystal structure analysis did not work with the free YopO. As it turns out, it is too flexible to form ordered crystals," says Peter.

The scientists at the University of Bonn therefore used several instruments from the structural elucidation toolbox. Together with Dr. Dmitri Svergun from the European Molecular Biology Laboratory in Hamburg, they used the PETRA III electron accelerator of the German Electron Synchrotron DESY. "The extremely intense and focused X-rays can be used to study the overall structure and structural changes of enzymes dissolved in water with the aid of small-angle X-ray scattering," said Svergun.

In addition, the researchers attached spin markers to certain positions of YopO and actin. These function like survey points in the landscape at which, for example, the exact location of a property can be determined. "Using the spin markers, we can use a molecular ruler - the PELDOR method - to measure the nanometer distances between these positions and thus determine how YopO and actin change shape," reports Hagelüken. So far it has been presumed that YopO performs a folding movement like scissors as soon as it binds to actin. "Our results strongly indicate, however, that it is not a larger movement, but many small ones, with which YopO enters the active state," says Peter.

If detected in time, the plague can be cured well with antibiotics. "However, bacteria can become resistant if antibiotics are used frequently, which means that the drugs no longer work properly," says Hagelüken. If the basic processes of pathogens with which they outwit the immune system are better understood, it might also be possible to develop more targeted, tailor-made substances to inhibit them.

Prepare a measurement in the laboratory: Martin Peter (left) and Dr. Gregor Hagelüken (right) from the Institute of Physical and Theoretical Chemistry at the University of Bonn. 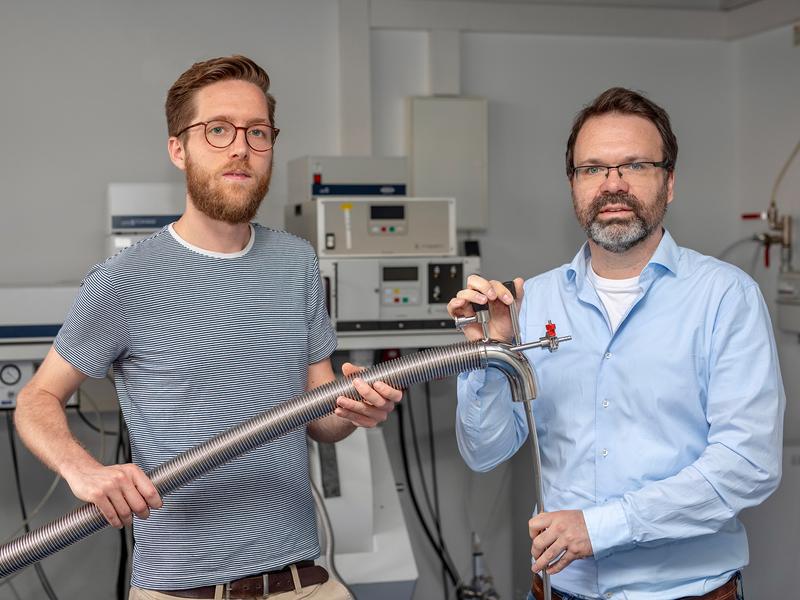