As methane concentrations increase in the Earth’s atmosphere, chemical fingerprints point to a probable source: shale oil and gas, according to new Cornell University research published today (14 August) in Biogeosciences, a journal of the European Geosciences Union.

The research suggests that this methane has less carbon-13 relative to carbon-12 (denoting the weight of the carbon atom at the centre of the methane molecule) than does methane from conventional natural gas and other fossil fuels such as coal.

This carbon-13 signature means that since the use of high-volume hydraulic fracturing – commonly called fracking – shale gas has increased in its share of global natural gas production and has released more methane into the atmosphere, according to the paper’s author, Robert Howarth, the David R. Atkinson Professor of Ecology and Environmental Biology at Cornell University in the US.

About two-thirds of all new gas production over the last decade has been shale gas produced in the United States and Canada, he said.

While atmospheric methane concentrations have been rising since 2008, the carbon composition of the methane has also changed. Methane from biological sources such as cows and wetlands have a low carbon-13 content – compared to methane from most fossil fuels. Previous studies erroneously concluded that biological sources are the cause of the rising methane, Howarth said.

Carbon dioxide and methane are critical greenhouse gases, but they behave quite differently in the atmosphere. Carbon dioxide emitted today will influence the climate for centuries to come, as the climate responds slowly to decreasing amounts of the gas.

Unlike its slow response to carbon dioxide, the atmosphere responds quickly to changes in methane emissions. “Reducing methane now can provide an instant way to slow global warming and meet the United Nations’ target of keeping the planet well below a 2-degree Celsius average rise,” Howarth said, referring to the 2015 Paris Agreement that boosts the global response to climate change threats.

“This recent increase in methane is massive,” Howarth said. “It’s globally significant. It’s contributed to some of the increase in global warming we’ve seen and shale gas is a major player.”

“If we can stop pouring methane into the atmosphere, it will dissipate,” he said. “It goes away pretty quickly, compared to carbon dioxide. It’s the low-hanging fruit to slow global warming.”

The research published in Biogeosciences was funded by the Park Foundation and the Atkinson Center.

MORE INFORMATION
This press release is produced in collaboration with Cornell University. The research is presented in the paper ‘Ideas and perspectives: is shale gas a major driver of recent increase in global atmospheric methane?’ to be published in the EGU open access journal Biogeosciences on 14 August 2019.

The scientific article is available online, free of charge, from the publication date onward, at https://www.biogeosciences.net/16/3033/2019/ (this URL will redirect to the final, peer-reviewed paper after the embargo lifts). A pre-print version of the final paper is available for download under the "Media" section at https://www.egu.eu/news/506/new-study-fracking-prompts-global-spike-in-atmospher... while the embargo lasts.

The European Geosciences Union (EGU) is the leading organisation for Earth, planetary and space science research in Europe. With our partner organisations worldwide, we foster fundamental geoscience research, alongside applied research that addresses key societal and environmental challenges. Our vision is to realise a sustainable and just future for humanity and for the planet. We publish a number of diverse scientific journals, which use an innovative open access format, and organise topical meetings, and education and outreach activities. The annual EGU General Assembly is the largest and most prominent European geosciences event, attracting over 16,000 scientists from all over the world in 2019. The meeting’s sessions cover a wide range of topics, including volcanology, planetary exploration, the Earth’s internal structure and atmosphere, climate, as well as energy and resources. The EGU General Assembly 2020 is taking in Vienna, Austria, from 3 to 8 May 2020. For more information and press registration, please check https://www.egu.eu/gamedia closer to the time of the event, or follow the EGU on Twitter (@EuroGeosciences) and Facebook (European Geosciences Union).

If you wish to receive our press releases via email, please use the Press Release Subscription Form at http://www.egu.eu/news/subscribe/. Subscribed journalists and other members of the media receive EGU press releases under embargo (if applicable) at least 24 hours in advance of public dissemination.

Biogeosciences (BG) is a not-for-profit international scientific journal dedicated to the publication and discussion of research articles, short communications, and review papers on all aspects of the interactions between the biological, chemical, and physical processes in terrestrial or extraterrestrial life with the geosphere, hydrosphere, and atmosphere. The objective of the journal is to cut across the boundaries of established sciences and achieve an interdisciplinary view of these interactions. Experimental, conceptual, and modelling approaches are welcome.

http://www.biogeosciences.net/16/3033/2019/ – scientific study (the link will be active after the study is published on 14 August 15:00 CEST; embargoed preprint available in the Media section at https://www.egu.eu/news/506/new-study-fracking-prompts-global-spike-in-atmospher...)
http://www.biogeosciences.net/ – Journal: Biogeosciences
http://www.egu.eu/news/506/new-study-fracking-prompts-global-spike-in-atmospheri... – HTML version of this release

<
Tower in Pennsylvania, USA, for drilling into the Marcellus Shale Formation for natural gas.
Ruhrfisch (CC-BY)

Tower in Pennsylvania, USA, for drilling into the Marcellus Shale Formation for natural gas. 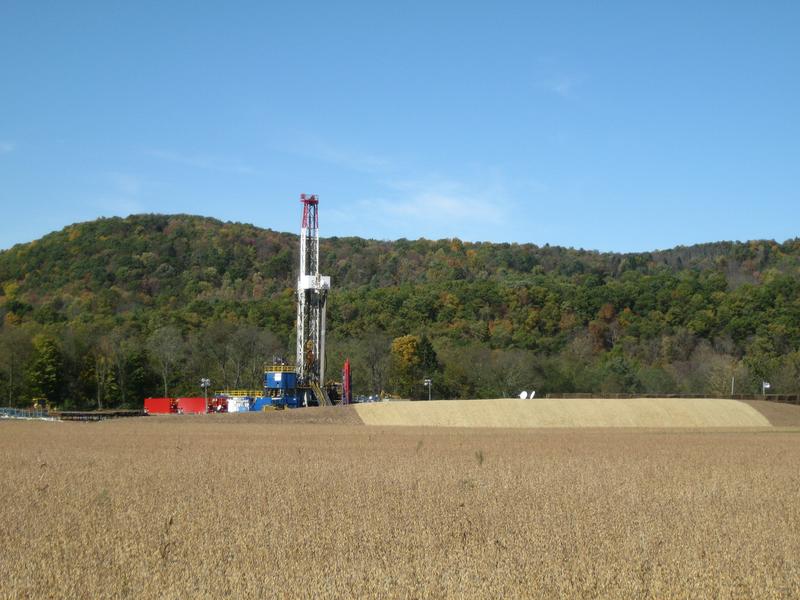