In a joint experimental and theoretical work performed at the Heidelberg Max Planck Institute for Nuclear Physics, an international team of physicists detected for the first time an orbital crossing in the highly charged ion Pr⁹⁺. Optical spectra were recorded employing an electron beam ion trap and analysed with the aid of atomic structure calculations. A proposed nHz-wide transition has been identified and its energy was determined with high precision. Theory predicts a very high sensitivity to new physics and extremely low susceptibility to external perturbations for this “clock line” making it a unique candidate for proposed precision studies.

Laser spectroscopy of neutral atoms and singly charged ions has reached astonishing precision by merit of a chain of technological advances during the past decennia. At world leading laboratories, these so-called clocks measure time with a fractional uncertainty at the order of only 10⁻¹⁸. At this level, external perturbations due to stray electric and magnetic fields (which are difficult to suppress) are an important factor slowing down further progress. One solution to this problem is to use highly charged ions, where the valence electrons are orders of magnitude more strongly bound to the nucleus. Hence, the electron cloud is much less sensitive to the aforementioned external perturbations. Often, highly charged ions also have an enhanced sensitivity to physics beyond the Standard Model, such as variation of natural constants or tests of relativity (local Lorentz invariance).

Not every highly charged ion is suitable to use as a clock. Namely, in order to exploit the techniques and tools already developed, the clock transition ideally is in the optical range. There it can be addressed by means of lasers, of which the frequencies can be compared extremely precisely with the aid of optical frequency combs. One type of highly charged ions which meets these criteria is found at rare “orbital crossings”. In hydrogen-like ions, energy levels with the same principal quantum number (1, 2, 3, …) are degenerate (“Coulomb ordering”). Adding more electrons to an ion shields the nuclear charge seen by outmost electrons and lifts the degeneracy in angular momentum (s, p, d …), resulting in the “Madelung ordering” for neutral atoms (see Fig. 1), which also determines the well-known structure of the periodic table of elements. For example, an electron in the 4s orbital is more strongly bound than in the 3d orbital. Because the orbitals participating in the reordering become nearly degenerate close to level crossings, optical transitions between them can exist. This idea was first published by the Australian physicist Julian Berengut in 2010. Since then, many highly charged ions near orbital crossings have been investigated and proposed by theorists. However, the electronic structure calculations for these ions are extremely complex, thereby making interpretations of the sparsely available experimental data nearly impossible. Measurements of Ir¹⁷⁺ at the Max Planck Institute for Nuclear Physics (MPIK) [1] and of Ho¹⁴⁺ at the Institute for Laser Science, The University of Electro-Communications in Tokyo [2] have thus far not identified the sought-after optical transitions between two orbitals or configurations. In the current work, highly charged praseodymium (Pr⁹⁺) was targeted because it is tractable from both the experimental and theoretical side.

In order to obtain the optical spectra of Pr⁹⁺, Hendrik Bekker employed the Heidelberg electron beam ion trap (HD-EBIT) operated by the group of José Crespo López-Urrutia at the MPIK. In this device, a magnetically focused electron beam impacts with Pr atoms, thereby stripping them of their electrons. By tuning the electron beam energy, the produced charge state can be controlled. The electron impacts also lead to excitations of the ions, followed by emission of light due to spontaneous decays. This light was recorded using a grating spectrometer. In step with progress in the lab, Julian Berengut, who stayed at MPIK as an Alexander von Humboldt fellow, applied his software package for high-precision relativistic atomic structure calculations (AMBiT) to predict the energy levels of Pr⁹⁺. Ultimately, all the observed lines could be identified by comparing the characteristic line shapes due to the strong magnetic field in the HD-EBIT to the predicted ones (see Fig. 2). Zoltán Harman from the department for quantum dynamics and quantum electrodynamics headed by Christoph H. Keitel at MPIK provided valuable input for this method of analysis. From the observed lines, the 5p4f ³G₃ – 5p² ³P₀ clock transition can be inferred to have a wavelength of 452.334(1) nm. Furthermore, Anastasia Borschevsky (University of Groningen) applied her highly successful Fock-space coupled cluster code to also study Pr⁹⁺. The susceptibility of the clock transition to external perturbations was found to indeed be strongly suppressed. Moreover, sensitivities to new physics such as variation of the fine-structure constant and tests of local Lorentz invariance were found to be rather large and of opposite sign to those of the most sensitive Yb+ ion clock transition [3]. Therefore, a clock based on Pr⁹⁺ can be complementary to this ongoing state-of-the-art research.

In previous predictions it was found that the lifetime of the Pr⁹⁺ clock state is on the order of 10 million years, which is too long to measure with current techniques. However, we found that due to hyperfine coupling to another state, the lifetime is reduced to approximately 10 years (i.e. a line width of nHz). In collaboration with Piet O. Schmidt (PTB Braunschweig), a laser spectroscopy scheme was developed, showing how the Pr⁹⁺ clock transition can realistically be studied. Such experiments could be performed at cryogenic Paul traps as developed at the MPIK in the group of José Crespo López-Urrutia. 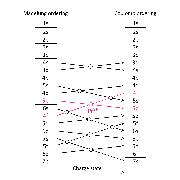 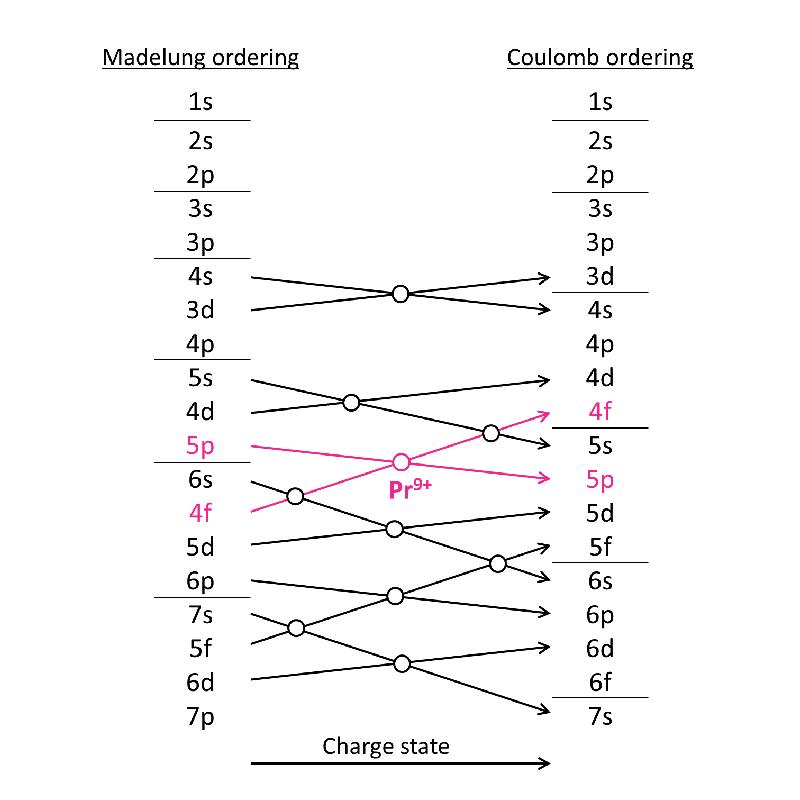 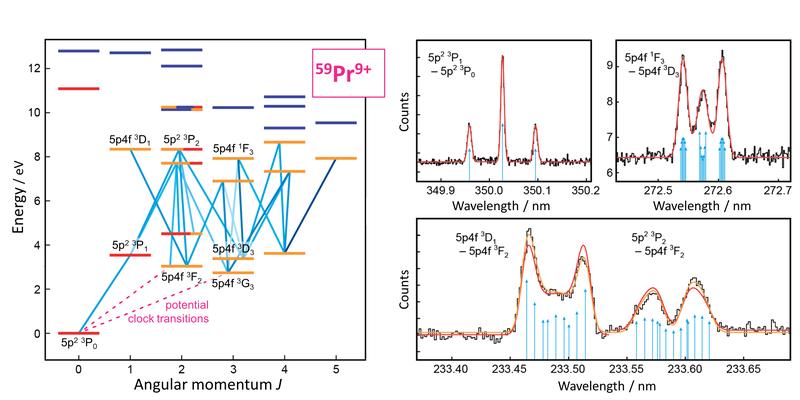