Standing as a great challenge of the 21st century is the consolidation of urban life during the course of population growth and climate change. Along with this comes a growing scarcity of available acreage for growing food for a steadily increasing world population. According to current reports, the forecasted growth of the world population is not able to be compensated for by advances in conventional approaches to animal or plant breeding, nor by an increase in efficiency of large-scale, conventional agricultural production. This is the starting point for research at Chemnitz University of Technology on sustainable solutions for the production of high-quality and healthy food for future generations. One solution: insects.

Generally speaking, insects are tiny, but very productive sources of both energy and fat, which makes them interesting research subjects. In light of this, Prof. Dr. Stefan Streif from the Professorship of Automatic Control and System Dynamics at Chemnitz University of Technology sees a future application of bio-economic research which brings forth a connection of insect breeding and plant cultivation, as well as a connection between insect and fish breeding. This approach of intelligent networking of different agricultural systems holds much promise for sustainable, organically-based food production. In addition to fish and plants, this also can include fungi networked with insects. Chemnitz University of Technology is currently developing, together with partners from the scientific and research communities, an overall system with largely closed energy and material cycles that are controlled and optimised through the use of learning-based control methods.

“From a control point of view, it is important to optimally coordinate and network the various biological and technical components, as well as flows of materials, at different levels of the organically-based production systems,” explains Streif. “Similar to an ecosystem, the resource cycles of fish, plants, fungi and insects complement each other so well that they form an almost closed system with corresponding synergies.” So as to create such synergies, the energy and resource requirements of a specific production module is met by taking advantage of product or residual materials from the other production modules. Control processes that implement such fine-tuned synergy of energy and resources use mathematical models to predict growth, and thus requirements for both energy and resources, in the respective organically-based production modules.

From a mathematical equation to a circulatory food production system

At Chemnitz University of Technology, a primary focus of this research is the insect larvae of the “Hermetia illucens” – the black soldier fly. Here, researchers make use of theoretical modeling and identification on one hand, and confirmation of the models via experiments on the other. Simply put: trial and error.

Within the framework of the model, larval growth is first mapped out mathematically. Balancing the larval metabolism forms the starting point of the modeling, and this leads to a set of mathematical model equations that map the various mechanisms of energy and resource absorption, conversion and release.

These equations are then adapted to the production conditions and the respective species in a second step of experimental modeling – the so-called “identification”. This experimental portion allows for the estimation of the specific parameters of the theoretically-established equation framework. However, these also allow the theoretical model to be confirmed or refuted, and accordingly, they also provide information on necessary adaptation steps that need to be taken with the model.

Insect bioreactor – fish and plants in the resource-efficient system

The most important tool used by researchers in this experimental phase is a specially-designed miniature bioreactor that raises the insects in a targeted manner. This bioreactor is equipped with a wide variety of sensors such as temperature, humidity, carbon dioxide and oxygen that record the metabolic activity of the larvae. The equipment of the bioreactor also includes a wide repertoire of control options – so-called actuator technology. This includes lighting, heating, cooling and humidification. This enables researchers to precisely regulate the environmental conditions for the larvae, and thus also sets optimal conditions as determined by the model.

With the help of simulations of such processes, the requirements and production of energy and resources can then be re-calculated, which is of particular importance when it comes to coupling a process with other production modules.

Producing green synergies – aquaponics can be a role model

A prominent and well-researched example of such coupling is that of fish farming and plant cultivation – so-called aquaponics. When it comes to cultivating insects, for example, the carbon dioxide produced by larval and fish growth can be used directly as a form of fertiliser for plants, which minimises the overall system’s carbon footprint. At the same time, oxygen produced by the plants is used by fish and insects in their metabolic processes. Beyond this, plant remains of tomatoes, cucumbers or lettuce can be used by the insects after harvesting and thus can be re-utilised in the cycle. The insect larvae serve as protein-rich fish feed or as starting material for oils and paraffins, an alkane consists of hydrogen and carbon atoms. These examples demonstrate but a fraction of the coupling that takes place in this closed cycle of energy and resources.

If one can imagine the entirety of these production modules with their energy- and material-based couplings, it becomes quite clear that this is a complex system. Simply put, even if researchers understand the operation of individual production modules, this does not mean that the combination of different production systems is likewise easy to understand. The team at Chemnitz’s Professorship of Automatic Control and System Dynamics is dealing precisely with the control of such highly complex, networked and sensitive systems. The professorship brings forth its expertise in the field of optimisation, model-based control and AI to various research projects.

In addition to this, researchers hope that theoretical analysis and simulation will enable them to gain a deeper understanding of the diverse interactions and interfaces of the components involved in each overall system. “A holistic understanding should form the basis for decision-making and any anticipatory regulation measures,” says Streif. He further explains that only with a deeper mathematical understanding of the systematic drafting of regulations can these systems be understood. They must take into account different and sometimes oppositional criteria, such as energy efficiency, the optimisation of material cycles, food quality and economy. Systematically, there are other variables to consider as well, such as operational safety, environmental safety, modularity and the stability of both upstream and downstream processes.

In addition to research in this field, algorithms from control technology and AI also represent an important basis for the future resource-efficient and, above all, low-energy production of high-quality food for a growing world population.

A current collaborative project which involves Chemnitz University of Technology in the research of such systems is the “CUBES Circle” project. This is coordinated by the Humboldt University Berlin and funded by the Federal Ministry of Education Research (BMBF) to the tune of roughly eight million euros. “In this project, we would like to couple different production modules and thus close energy and material cycles. We aim to produce as resource-efficiently as possible, and reduce waste down to zero-waste levels,” explains Prof. Dr. Stefan Streif from the Professorship of Automatic Control and System Dynamics at Chemnitz University of Technology. For further information: https://cubescircle.de. 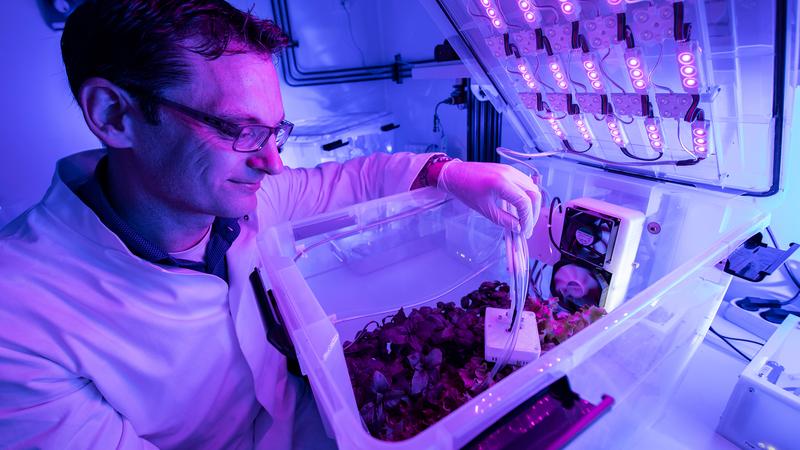