Stability and dynamics of the microbiome
Erweiterte Suche ?

Home > Pressemitteilung: Stability and dynamics of the microbiome

Stability and dynamics of the microbiome

Every multicellular creature in the world is colonized by an unimaginably large number of microorganisms and has evolved together with them in the history of life. The natural microbiome, i.e. the totality of these bacteria, viruses and fungi living in and on a body, is of fundamental importance for the entire organism: on the one hand, it performs vital tasks for the host organism, for example, from supporting resource utilization to protecting against pathogens. On the other hand, microbial dysbiosis is associated with various serious diseases in humans like diabetes, Crohn's disease or other chronic inflammatory diseases. Researchers worldwide have therefore been intensively studying the highly complex interactions of host organisms and microorganisms and their involvement in central life processes for several years.

An important approach for their better understanding is the investigation of so-called model organisms. These include the nematode Caenorhabditis elegans, which is only about one millimetre long. Due to its simple organisation and short generation time, C. elegans is well suited for evolutionary biology and microbiome research. Using this example, a research team from the Evolutionary Ecology and Genetics Group at Kiel University has now published a long-term study within the framework of the Collaborative Research Centre (CRC) 1182 "Origin and Function of Metaorganisms". It investigates the underlying factors influencing the composition of the natural intestinal microbiome of the nematode. The researchers from Kiel found out that the microbiome of the worm is strongly influenced by the microbial community of the environment and that there are strong differences between individual animals. In addition, the worm’s microbiome appears to be strongly influenced by the interactions between the microbes themselves. The results suggest that the microbiome is capable of performing the same basic functions for the host, independent of its exact composition. The researchers recently published their results in the journal Environmental Microbiology.

Individual composition of the microbiome

An ecosystem inside the body

The Kiel researchers thus concluded that, apart from a few constants, it is always different microbes that make up the natural microbiome of the individual animals. "There is not a specific single set of bacteria that helps the worm to maintain important life functions such as food conversion or infection protection," emphasises Schulenburg, evolutionary biologist and head of the research group. "The microbiome of the nematode varies considerably from individual to individual and changes dynamically over time," continued Schulenburg. In order to understand how a stable functioning of the microbiome is maintained despite this dynamic development, the Kiel research team studied the interactions between the microorganisms in more detail: Although the microbiome interacts with the host organism, it is at the same time strongly influenced by the interplay between the microorganisms themselves.

For example, certain species of bacteria, which prey on other bacteria, can control the density of bacteria within the microbiome. To a certain extent, this creates space for various other types of microorganisms. Overall, this can result in a high species diversity within the microbiome. "Such high diversity can potentially be beneficial for the host organism," says postdoctoral researcher Johnke. "The high diversity can ensure a functional redundancy of the microbiome, i.e. that different bacterial species can, to a certain extent, stand in for each other and take over the same functions," continues Johnke. In the opposite case, the increased occurrence of dominant species within the microbiome can lead to a decrease in diversity and thus have potentially negative effects on the host organism - this case, too, can presumably take place in the microbiome of the nematode.

When investigating the microbial composition and its changes over time, scientists, as in the Kiel study, apply, among other things, the principles of community ecology. They regard the microbiome as an independent ecosystem in which, for example, different species of bacteria compete with each other, basically following the same principles as, for example, wild animals that live together in a particular habitat and regulate each other in their populations. "The consideration of the nematode microbiome as an independent ecosystem is of great value because it allows us to obtain fundamental insights into the colonization dynamics and microbial composition of a living organism," emphasises Schulenburg. "Similar to the ecosystems of the visible environment, different organisms in this microbial habitat can occupy identical niches or functions or a high species diversity can be beneficial for the stability of the entire system," continued Schulenburg. The new results thus contribute to a better understanding of the composition and dynamics of the microbiome and the associated functional consequences for the host organism.

https://www.uni-kiel.de/de/pressemitteilungen/2020/073-johnke-env-microbio-sampl...
Caption: The worms were sampled from rotting organic matter that features a characteristic microbial substrate but substantially deviates from the intestinal microbiomes found in the animals. © Christian Urban, Kiel University

About CRC 1182:
The Collaborative Research Centre "Origin and Function of Metaorganisms" is an interdisciplinary network involving about 80 researchers that investigates the interactions of specific microbial communities with multicellular host organisms. It is supported by the German Research Foundation (DFG) and deals with the question of how plants and animals, including humans, form functional units (metaorganisms) together with highly specific communities of microbes. The aim of SFB 1182 is to understand why and how microbial communities form these long-term connections with their host organisms and what functional consequences these interactions have. The SFB 1182 brings together scientists from five faculties of Kiel University, the GEOMAR Helmholtz Centre for Ocean Research Kiel, the Max Planck Institute for Evolutionary Biology Plön, the Heinrich-Heine-Universität Düsseldorf, the Leibniz Institute for Science and Mathematics Education and the Muthesius University of Fine Arts and Design.

The worms were sampled from rotting organic matter that features a characteristic microbial substrate but substantially deviates from the intestinal microbiomes found in the animals.

<
he worm’s microbiome (bacteria highlighted in red) is strongly influenced by the environment and als ...
© Dr Julia Johnke

Dr Julia Johnke, postdoctoral researcher in the Evolutionary Ecology and Genetics group, investigated the composition and dynamics of the worm’s natural microbiome. 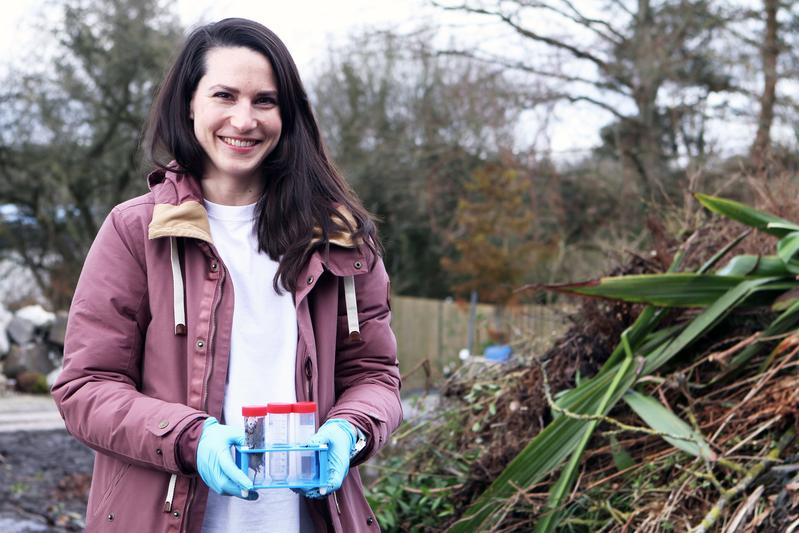 he worm’s microbiome (bacteria highlighted in red) is strongly influenced by the environment and also differs considerably between individual animals. 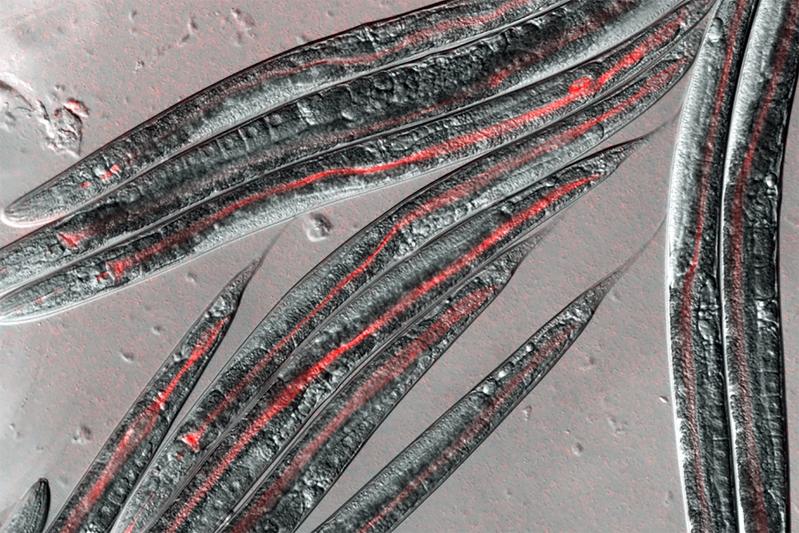