A genetic nano-toolkit for the generation of new biomaterials
Erweiterte Suche ?

Home > Pressemitteilung: A genetic nano-toolkit for the ...

A genetic nano-toolkit for the generation of new biomaterials

Magnetic bacteria might soon be used for the production of novel biomaterials. A team of microbiologists at the University of Bayreuth led by Prof. Dr. Dirk Schüler developed a modular system for the genetic reprogramming of bacteria, thereby turning the organisms into cell factories for multifunctional magnetic nanoparticles that combine various useful functions and properties. Because of their exceptional magnetic properties and good biocompatibility, these nanoparticles might be a promising new material in the biomedical and biotechnological field. In the journal "Small" the scientists presented their findings.​

From magnetosomes to versatile nanoparticles

Magnetic bacteria of the species Magnetospirillum gryphiswaldense align their swimming behaviour along the Earth's magnetic field. Within the cells, magnetic nanoparticles, the magnetosomes, are arranged in a chain-like manner, thereby forming an intracellular compass needle. Each magnetosome consists of a magnetic iron oxide core surrounded by a membrane. In addition to lipids, this membrane also contains a variety of different proteins. The microbiologists of the University of Bayreuth have now succeeded in the coupling of biochemically active functional groups, which originate from various foreign organisms, to these proteins. The method used here starts at the stage of the genes that are responsible for the biosynthesis of the membrane proteins. These bacterial genes are fused to foreign genes from other organisms that control the production of the respective functional proteins. As soon as the genes are re-integrated into the genome, the reprogrammed bacteria produce magnetosomes that display these foreign proteins permanently installed on the particle surface.

In the study, four different functional groups (i.e. foreign proteins) were coupled to the membrane proteins. These include the enzyme glucose oxidase from a mould fungus, which is already used biotechnologically, for example as a "sugar sensor" in diabetes diseases. In addition, a green fluorescent protein from a jellyfish and a dye-producing enzyme from the bacterium Escherichia coli, whose activity can be easily measured, were installed on the surface of the magnetosomes. The fourth functional group is an antibody fragment from a lama (Alpaca) that was used as a versatile connector. Thus, all these properties including the superb magnetization of the magnetosomes are genetically encoded in the bacteria.

"Using this genetic strategy, we reprogrammed the bacteria to produce magnetosomes that glow green when irradiated with UV light and at the same time display novel biocatalytic functions. Various biochemical functions can be precisely installed on their surfaces. Thereby, magnetosomes from living bacteria are transformed into multifunctional nanoparticles with fascinating functions and properties. Moreover, the particles remain fully functional when they are isolated from the bacteria - which can be easily performed by taking advantage of their inherent magnetic properties," says Professor Dirk Schüler, who led the research team.

A genetic toolkit for applications in biomedicine and biotechnology

Functionalization of the magnetosomes by no means is limited to the functional groups that were installed on the particle surface by the Bayreuth microbiologists. Instead, these proteins can easily be replaced by other functions, thus providing of a highly versatile platform. Genetic reprogramming therefore opens up a broad spectrum to design the magnetosome surface. It provides the basis for a "genetic toolkit" that allows the production of tailored magnetic nanoparticles, combining different useful functions and properties. Each of these particles is between three and five nanometres in size.

"Our genetic engineering approach is highly selective and precise, compared to, for instance, chemical coupling techniques which are not as efficient and lack this high degree of control", explains the Bayreuth microbiologist Dr. Frank Mickoleit, the first author of the study. He points to a decisive advantage of the new biomaterials: "Previous studies show that the magnetic nanoparticles are likely not harmful to cell cultures. Good biocompatibility is an important prerequisite for the future application of the particles in biomedicine, for instance as contrast agents in magnetic imaging techniques or as magnetic sensors in diagnostics. In the future, for example, similar particles might help to detect and destroy tumour cells. Bioreactor systems are another field of application. Magnetic nanoparticles equipped with tiny catalysts would be highly suitable for this purpose and enable complex biochemical processes.

"There is an enormous application potential for nanoparticles that display different functional groups on the surface, particularly in the fields biotechnology and biomedicine. The magnetic bacteria now may serve as a platform for a versatile nano-toolkit, inspiring scientific creativity in the field of Synthetic Biology. It will initiate further interesting research approaches", adds the microbiologist Clarissa Lanzloth B.Sc., who was involved in the new study as co-author during completion of her Master thesis in "Biochemistry and Molecular Biology" in Bayreuth.

Clarissa Lanzloth B.Sc. and Dr. Frank Mickoleit in a laboratory of Bayreuth Microbiology. The electrophoresis device is used for the separation and analysis of proteins. 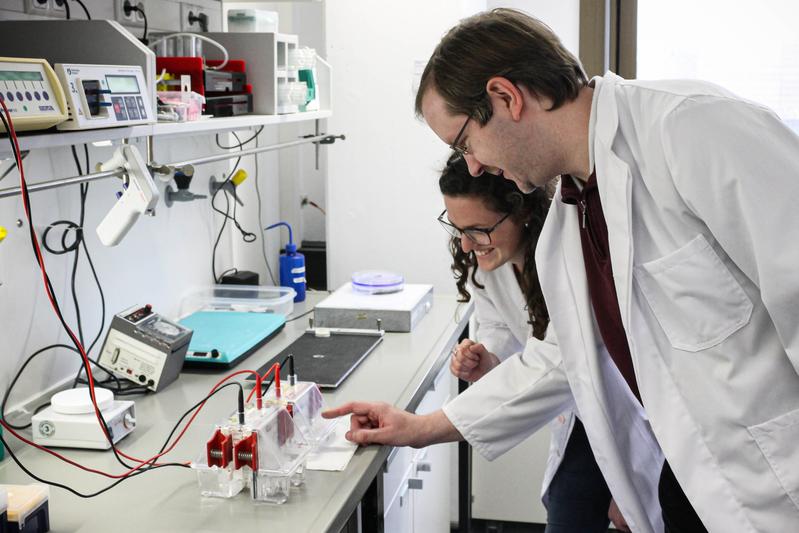 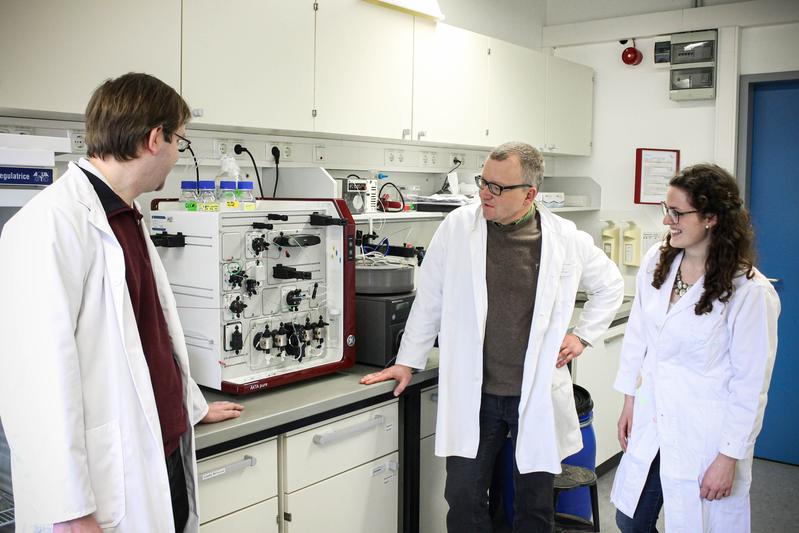