ArKol Project: Tapping into the Thermal Potential of Façades

About 40 percent of the primary energy consumption in Germany is used for space heating and warm water. Facades which function as a “thermal wall” can help bring on the transformation of our heating system, yet they have been given little attention up to now. In the ArKol project, a research consortium led by the Fraunhofer Institute for Solar Energy Systems ISE has developed two novel solar thermal façade collectors: a solar thermal strip collector and a solar thermal jalousie. As an integral part of the façade, both elements offer an architecturally pleasing experience.

The project “ArKol – Development of architecturally aesthetic, integrated façade collectors with Heat Pipes,” just ended in February 2020. The project focused on developing multifunctional building envelopes. In a cooperative effort Fraunhofer ISE joined together with the DAW SE company, Priedemann Façade-Lab as well as the Borderstep Institute for Innovation and Sustainability, the education service provider Kompetenzzentrum Ausbau und Fassade and the Institute for Building Construction of the University of Stuttgart to achieve the project aim.

“The intent of the project was to utilize the large potential area on facades to generate useful heat for buildings and offer architects more freedom of design at the same time. In the past, potential customers have been hesitant about the appearance of collectors, and this has hampered the wider use of solar thermal systems. Also, the aim was to reduce the planning effort, provide easier mounting and installation possibilities,” says Dr. Michael Hermann, Coordinator for Innovation Processes in the business area of Thermal Systems and Building Engineering at Fraunhofer ISE.

Compared with standard roof-mounted installations, façade-mounted solar thermal collectors offer a variety of advantages. For one, when used for solar-assisted space heating, the irradiation profile on the façade is a better match for the actual energy consumption. Because the winter sun is lower in the sky, it shines at a more profitable angle than on the roof and more energy is generated. In summer, façade-mounted collectors are exposed to less solar radiation than roof-mounted collectors, which corresponds to the reduced heat demand. With less surplus heat generated, the material loads on the collector and heat transfer fluid are reduced, an advantage for the collector lifetime. In urban centers with tall buildings, there is more area available on the building façade than on the roof, especially since the roof is often used for elevators shafts and other technical building services.

For the efficient and aesthetic utilization of solar thermal energy in façades, the researchers and their industry partners developed first demonstrators for transparent and opaque building envelopes.

On transparent building facades, solar heat generation with conventional collectors has either not been possible or only with reduced transparency up to now. At the same time, venetian blinds are often installed between transparent glazings in high-rise buildings. When the sun shines, temperatures of up to 100°C can occur in the gap between the glass panes. The solar thermal blind can dissipate this surplus heat just as a solar collector, while offering the full mobility and functionality of a conventional venetian blind system at the same time. Also, the solar thermal venetian blind can be fully retracted to provide full transparency. By dissipating the heat, the cooling load in the building, and thus the cooling demand, is lower.

Heat pipes are integrated into each slat and transport the heat from the moveable slats into the stationary collecting channel using a switchable thermal coupling without the use of a fluid heat carrier. Thanks to this heat transfer concept, the slats are as mobile as any other venetian blind upon release of the press contact. The blind is exceptionally suited for double-clad facades, since the gap between the glazings provides good protection against the weather. “The solar thermal venetian blind is a multifunctional façade element which provides a pleasant indoor climate and glare control, while reducing the energy demand for hot water and space cooling at the same time,” explains Simon Häringer, project head.

The strip collector was also developed within the ArKol project. As an aesthetically attractive building component, it offers a higher degree of flexibility with respect to size, color, interval, number and orientation compared to conventional solar collectors. The collector construction is based on strips, which can vary in length and can be positioned on the façade using a stepless connector system. The façade areas between the strips can be cladded with the conventional façade materials. This is technically possible since the heat collected in the spectrally selective absorber is transported to the side in a collective duct in a dry process. Since the solar fluid only flows in the collecting channel, the singular collector elements don’t require a hydraulic connection. The collectors are mounted on a rear-ventilated curtain façade with typical mounting brackets, or agraffes, available on the market. This concept can be implemented for both new buildings as well as retrofits. “This plug and play solution simplifies the coordination of the various trades in the building process. It creates clear interfaces for installation and liability. Also the simplified planning for the hydraulics assists façade builders, plasterers and painters in the implementation,” explains Katharina Morawietz, project head of the subproject Solar Thermal Strip Collectors. These advantages during mounting and also the high design flexibility become visible during the implementation of the first demonstration façade installed on the building of the paint manufacturer DAW SE.

The interdisciplinary cooperation was decisive to the project’s success – from the first design through to the proof-of-practice – and was key to translating the concepts initially proposed by Fraunhofer ISE for facade-integrated collectors into reality. The competence and experiences from the solar and building sectors came together, from the façade planning through component development up to mounting and installation by the trades, to form a concerted effort. Besides the project coordination, Fraunhofer ISE’s role was the characterization and development of heat pipes, solar thermal system design and layout, the constructive implementation, building the demonstrator and the measurements. The solar thermal strip collectors for the demonstration façade were manufactured by the company Wagner Solar.

The project was financially supported by the German Federal Ministry for Financial Affairs and Energy (BMWi).

<
The slats of the solar thermal venetian blind (STVB) absorb the incident solar radiation. The heat i ...
©Fraunhofer ISE
None

<
The blind is particularly suitable for buildings with large glass façades. The demonstrator shown he ...
©Fraunhofer ISE
None

The slats of the solar thermal venetian blind (STVB) absorb the incident solar radiation. The heat is transferred to the collecting channel via heat pipes and an aluminum adapter. 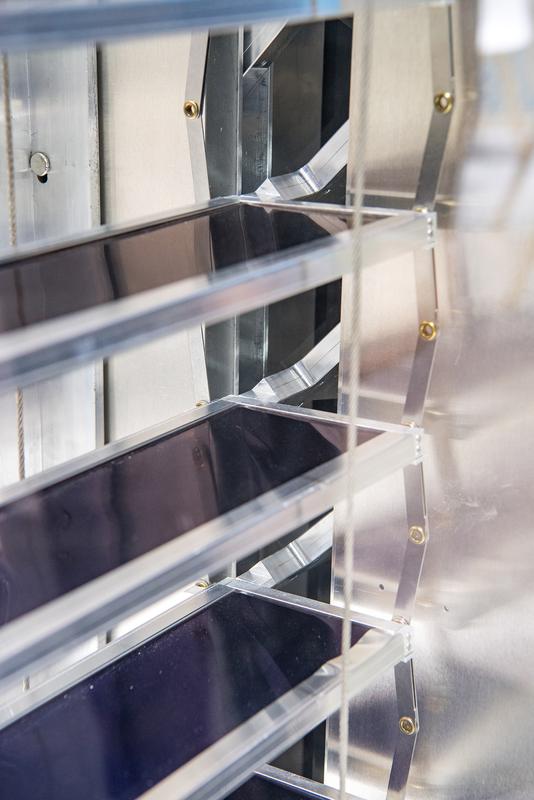 The blind is particularly suitable for buildings with large glass façades. The demonstrator shown here is integrated into a double-clad façade element. 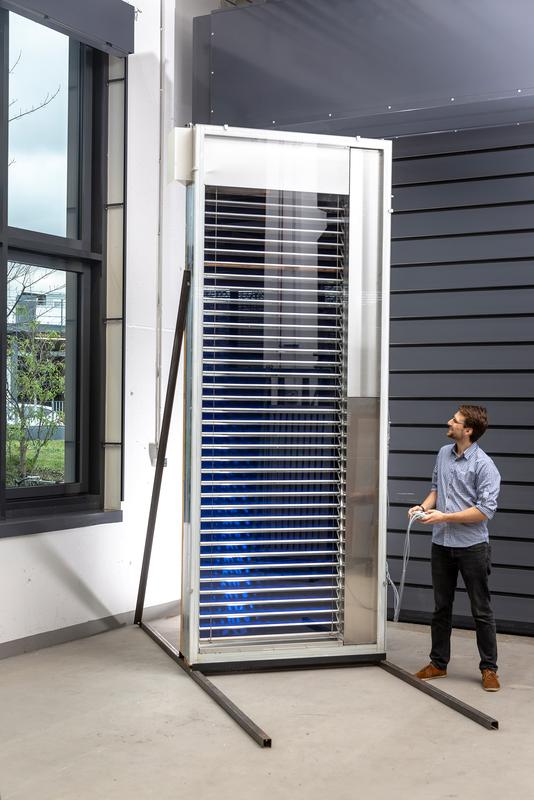