Lack of Knowledge and Uncertainty about Algorithms in Online Services
Erweiterte Suche ?

Lack of Knowledge and Uncertainty about Algorithms in Online Services

Although Swiss internet users use online services where algorithms select search results, recommendations and information daily, they know little about their role and function. This leads to uncertainty, a feeling of powerlessness and a desire for more control, as a representative survey of Swiss internet users conducted by the University of Zurich shows.

Services like Google, WhatsApp, Instagram or Netflix are based on algorithmic selection: They automatically select the content that is presented to us and which search results, product recommendations or advertisements we see. Algorithms thus influence how we perceive the world and also exert influence on our behavior.

“There is much speculation in the media and in politics about the power and risks of algorithms in everyday life. However, comprehensive empirical evidence on the significance of algorithmic selection is still lacking, also for Switzerland,” emphasizes Michael Latzer, professor of Media Change & Innovation at the University of Zurich. A representative survey of around 1,200 Swiss internet users has now provided initial insights.

The Swiss use algorithmic-selection applications daily

On average, Swiss internet users (92% of the population) spend three and a half hours a day online. They spend over two thirds of this time on applications that use algorithmic selection (e.g. WhatsApp, Instagram or Google Search). Nevertheless, they perceive algorithmic-selection applications to be relatively unimportant: They consider offline alternatives such as conversations with friends and family to be more important for their social and political opinion formation. They also prefer offline alternatives to automated online recommendations on entertainment services such as Netflix (72%) or when purchasing products and services (74%). “The often extensive use of algorithmic services alone should not lead to premature conclusions about their impact on users as they consider offline alternatives to be more important in all life domains,” says Michael Latzer.

Algorithms are only partially recognized and hardly understood

Only some internet users recognize algorithmic selection – although they are confronted with it every day. Two thirds (66%) realize that content displayed to them is similar to what they have viewed in the past. Half of internet users (54%) sometimes feel that search results have been sorted specifically for them. “Despite high daily use, there is astonishing ignorance. For instance, one in three do not know that Google searches with the same search terms can lead to different results for different people,” explains Michael Latzer.

Eight out of ten internet users do not know that on Facebook and similar services, it is not employees but algorithms that compile news feeds. When it comes to online shopping, 27% are not aware that online advertisements can be personalized and a third (35%) do not know that companies use bots on the internet to communicate with customers. With regard to skills in dealing with algorithmic online services, digital divides exist in Switzerland: Younger, male and better-educated internet users are more competent and know more about the underlying processes. “These internet users also have a higher risk awareness and are more likely to protect themselves against risks,” says Latzer.

Despite diffuse risk awareness, only few protect themselves

Although many Swiss internet users do not know much about the function and role of algorithms, a diffuse awareness of risks is widespread, especially among better-educated and older people. However, there is a clear discrepancy between the perceived risks and the protective behaviors individuals apply. For instance, most Swiss internet users (93%) are concerned about receiving one-sided or distorted information on the internet. However, only a quarter (25%) of social media users check the accuracy of news that appears in their news feed by consulting additional sources. 95% at least sometimes think about possible privacy violations on the internet and 79% know that their personal data is of interest to companies like Google or Facebook. Nevertheless, only 32% adjust the respective privacy settings. Only half of internet users (50%) deny apps particular rights on their mobile devices, or delete cookies or their browser history (47%).

In general, trust in algorithmic online services is low in Switzerland. Only a quarter of internet users (27%) state that they trust online services and just 14% consider most information on the internet to be trustworthy. If it were up to them, six out of ten users (59%) would not allow social media such as Facebook and Instagram any influence over topics that are important to them. A majority would welcome better control of how social media (66%) and Google Search (61%) work. A third (34%) also feel that they are completely losing control over their data on the internet and a significant number of Swiss internet users even feel resigned: Six out of ten believe that they have to accept that privacy no longer exists on the internet and 28% no longer even try to understand how services like Google Search work. Michael Latzer explains: “These results reflect a widespread desire in Switzerland for more individual and external control over these services.”

Cyberoptimism is unbroken in Switzerland

Nevertheless, more than eight out of ten users (84%) are happy that the internet exists and two thirds (67%) think that the internet is a good thing for society. Cyberoptimism is more pronounced among internet users with medium or high educational attainment as well as among men. “The conclusion of Swiss internet users remains positive,” summarizes Michael Latzer from the current results of the UZH study. “Nevertheless, the desire for more control and transparency over algorithmic online services must be taken seriously.”

The aim of the project “The Significance of Algorithmic Selection for Everyday Life: The Case of Switzerland” is to empirically investigate the significance of online applications that employ algorithmic selection for everyday life in Switzerland. The project evaluates use, awareness, risk awareness and protective behavior in five life domains: Social and political orientation, commercial transactions, social interactions, entertainment and health.

The project is carried out by the Media Change & Innovation Division of the Department of Communication and Media Research (IKMZ) at the University of Zurich. The project team members include Michael Latzer (lead), Noemi Festic and Kiran Kappeler. The project is based on a representative online survey of 1,202 internet users aged 16 and over, conducted by the LINK Institute from November 2018 to January 2019. At the same time, the respondents’ internet usage behavior was tracked using passive metering software. The project is supported by the Swiss National Science Foundation (SNF).

Michael Latzer, Noemi Festic, Kiran Kappeler. Report 1, 2, 3 and 4 from the Project: The Significance of Algorithmic Selection for Everyday Life: The Case of Switzerland. University of Zurich. 6 April 2020. https://mediachange.ch/research/algosig

Awareness of risks related to algorithmic selection by age in Switzerland 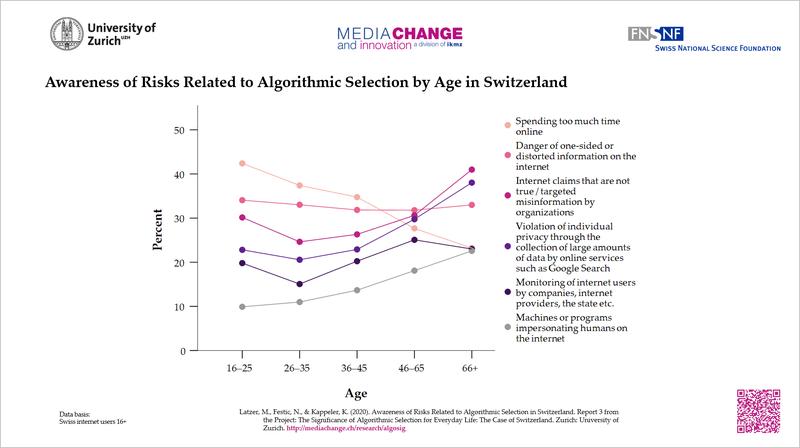 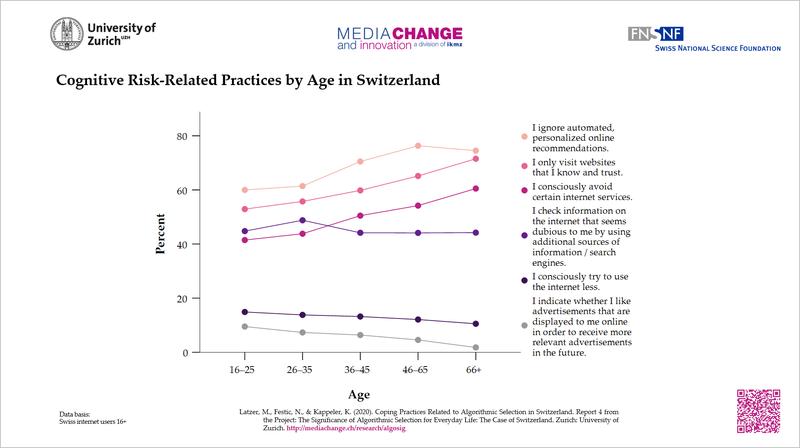