When ions rattle their cage

Electrolytes play a key role in many areas: They are crucial for the storage of energy in our body as well as in batteries. In order to release energy, ions - charged atoms - must move in a liquid such as water. Until now the precise mechanism by which they move through the atoms and molecules of the electrolyte has, however, remained largely unknown. Scientists at the Max Planck Institute for Polymer Research have now shown that the electrical resistance of an electrolyte, which is determined by the motion of ions, can be traced back to microscopic vibrations of these dissolved ions.

In chemistry, common table salt is also known as sodium chloride. If this salt is dissolved in water, sodium and chloride atoms dissolve as positively or negatively charged ions, which can move freely in water: An electrolyte solution is created. Electrical fields allow these charged particles to be transported within the solution and thus provide an electric current. These currents are the basis for battery technology or energy storage in living cells.

To increase currents within batteries, typically the number of dissolved ions is increased. In this case, however, ions more frequently collide with other ions in the liquid, which leads to an increase of the electrical resistance.

To achieve higher currents in electrolyte solutions, scientists at the Max Planck Institute of Polymer Research headed by Dr. Johannes Hunger and Dr. Yuki Nagata (department of Prof. Dr. Mischa Bonn) have now investigated electrolyte solutions using both, experiments and computer simulations. In collaboration with scientists from Berlin and Graz, they have experimentally investigated the microscopic motion of ions. They were able to show that the ions - before they can move in the liquid - are first trapped by the surrounding molecules in a kind of cage and oscillate back and forth within this cage, similar to a swing. This ultra-fast motion, which occurs between 1000 billion and 10000 billion times per second, could be analyzed with the help of ultrashort laser pulses.

The scientists showed that the maximum deflection of the oscillating ions - similar to the length of a swing's chain – is related to the maximum possible electric current that can be obtained in the electolyte. These experimental findings were confirm using computer simulations. Thus, the researchers could solve a riddle that is more than 100 years old: The resistance of an electrolyte solution depends not only on the number of ions but also on their size and shape. The scientists have now shown that different resistances of differently-shaped and -sized ions can be traced to different cages and cage vibrations.

The results were published in the journal "Nature Communications".

<
With the help of laser spectroscopy, the rattling of ions in their molecular cage can be observed
© MPI-P

With the help of laser spectroscopy, the rattling of ions in their molecular cage can be observed 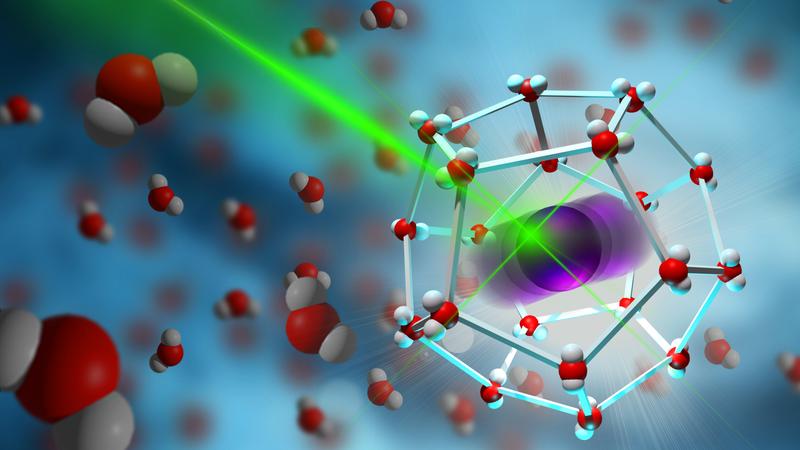