Aging and diet lead to proteome changes in the intestinal epithelium

The small intestine is one of the most important interfaces between the environment and our body. It is responsible for nutrient absorption but also forms a barrier against potentially harmful environmental cues. A research team, led by researchers from the Leibniz Institute on Aging (FLI) in Jena, Germany, investigated the effects of aging and diet on the intestinal epithelium of young and old mice. They were able to show region-specific effects on the proteome and age-related impairments in adaptation to nutrient availability. Their results provide a complete picture of the spatial organization of the small intestine proteome in the mouse and were published in the journal Cell Reports.

Jena. The small intestine (SI) is one of the most important interfaces between the environment and our body. It has two major functions: it is responsible for absorbing nutrients from the food we eat and functions as a barrier to restrict the entry of harmful substances. The SI is a highly adaptive and dynamic organ, as it adapts to changes in nutrient intake or diet. The intestinal epithelium undergoes a process of continuous renewal, every 3-5 days.

Effects of aging and diet on the small intestine have already been investigated. It is known that aging leads to reduced absorption of nutrients by the epithelium thus contributing to malnutrition in elderly people. In addition, anatomical differences between different regions of the SI are well known, but so far, region-specific effects of aging and diet on the set of proteins that compose the intestinal epithelium had not been investigated.

A study of an international research team of the Leibniz Institute on Aging – Fritz Lipmann Institute (FLI) in Jena, Germany and their colleagues from Koch Institute for Integrative Cancer Research at MIT, Cambridge, USA; Genentech Inc., San Francisco, USA and Friedrich Schiller University Jena, Germany, has now focused on this topic. Using state-of-the-art mass spectrometry-based proteomics, the research team investigated age- and region-specific differences in the cellular composition of intestinal crypts, anatomical structures beneath the absorptive epithelium, where intestinal stem cells (ISCs) and differentiated cell types are located. Their results provide a complete picture of the spatial organization of the SI proteome in mouse.

Region-specific effects of aging on the intestinal epithelium

Analyzing proteome changes across 12 different parts of the SI, the researchers were able to characterize spatial variation of protein abundance along the SI and identifying regional differences in cellular composition of intestinal crypts. The results show, e.g., that the number of goblet cells, a cell type that mainly secretes mucus, is significantly increased in the ileum part of the SI. The differences within the SI crypt proteome are consistent with the known anatomical division into the three major parts duodenum, jejunum and ileum.

In a next step, the team investigated the impact of aging on intestinal crypts isolated from the whole SI, comparing over 5000 proteins in young and old mice. Further analysis indicated that proteins affected by aging show region-specific abundance. This means that aging has different effects on different anatomical regions of the intestinal epithelium.

“Our results show a clear effect of aging on the set of proteins and cellular composition of intestinal crypts. We found some major changes in inflammation-related proteins and decreased levels of stem cell markers. This shows that the delicate structure of the epithelium gets disturbed during aging, which leads to inflammation and reduced self-regeneration. Especially the region of the ileum shows a more pronounced aging phenotype by a decreased number of goblet cells per crypt”, says Nadja Gebert, first author of the study, about the main results of her PhD thesis.

Effects of diet on the intestine of old and young mice

In a further step, the research team investigated how young and old mice respond to dietary changes. They put young and old animals on dietary restriction (a well-known anti-aging intervention based on reduced food intake without malnutrition) for one month and refed a subset of those after the diet. This short-term diet as well as diet followed by refeeding affected the abundance of hundreds of proteins in young animals, while in old animals this response was blunted with fewer proteins affected, indicating a reduced ability of old animals to adapt to sudden changes of diet. Consistently, old animals had problems to stabilize their body weight: they continued losing weight even several days after the change of diet, whereas younger animals were able to rapidly stabilize their body weight after a few days. Despite this, the authors found that a cycle of diet followed by refeeding was sufficient to partially restore the cellular composition of intestinal crypts in old mice, suggesting potential anti-aging effects of this dietary intervention.

“Especially the alternation between the dietary restricted and fed state, rather than dietary restriction alone, promotes a positive restoration of epithelium composition and a partial rejuvenation of the crypt proteome in old mice. This might be interpreted as support for the positive effects of interventions based on intermitted fasting. On the other hand, the reduced adaptive response of the old intestinal epithelium shows the drastic impact on the way old individuals are influenced by dietary changes or drug treatments”, says Dr. Alessandro Ori, group leader at FLI.

Taking a closer insight into the processes affecting ISCs under short-term dietary restriction followed by refeeding, the researchers show that the epithelium is partially restored because of increased stem cell differentiation towards the secretory lineage. They identified the rate-limiting enzyme for ketogenesis, Hmgcs2, as a modulator of stem cell differentiation, which responds to dietary changes. Diet leads to increased levels of this enzyme in ISCs and a co-occurring reduction of all differentiation markers with exception of enterocyte markers.

Taking a broader look at metabolic changes, the researchers found regional differences in the abundance of rate-limiting enzymes for other key metabolic pathways, e.g., gluconeogenesis. This suggests that the metabolism of intestinal epithelial cells and the levels of metabolites vary along the SI. These differences can contribute to the maintenance of the epithelial composition and the adaptation of the SI to changes of diet.

“With this broad proteomics study we are able to provide an atlas of the spatial organization of the small intestine proteome in mouse, which can be used for further studies and is available as free online resource”, says Ori. The researchers will base future studies on the search for medical interventions capable of restoring the regenerative capacity of the old intestine, contributing to a healthy lifespan in the elderly.

The Leibniz Institute on Aging – Fritz Lipmann Institute (FLI) – upon its inauguration in 2004 – was the first German research organization dedicated to research on the process of aging. More than 350 employees from around 40 nations explore the molecular mechanisms underlying aging processes and age-associated diseases. For more information, please visit www.leibniz-fli.de.

<
Aging has region-specific effects on the proteome of the intestinal epithelium and leads to age-rela ...
(Source: FLI / Alessandro Ori & Nadja Gebert. Created with BioRender.com)
None

Aging has region-specific effects on the proteome of the intestinal epithelium and leads to age-related impairments in adaptation to nutrient availability. 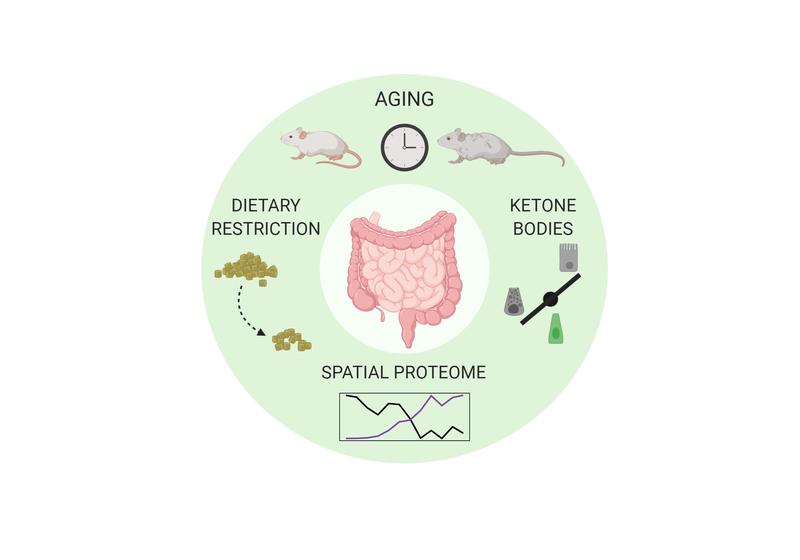