Home > Pressemitteilung: Out of balance - Ability to eliminate ...

Aging is the main risk factor for dementia and Parkinson’s disease. As age progresses, toxic protein aggregates pile up in the brain and impair neuronal function. But why does that happen? An international team of scientists coordinated by the Leibniz Institute on Aging - Fritz Lipmann Institute (FLI) (Jena, Germany) and the Scuola Normale Superiore (Pisa, Italy) found answers by studying the brain of the turquoise killifish (Nothobranchius furzeri) brains. They delineate a timeline of molecular events during aging that is triggered by the early reduction of proteasome activity and culminates in aggregates formation. Remarkably, fish that preserve proteasome levels during aging live longer.

Jena/Pisa. Protein homeostasis refers to the processes involved in the synthesis, folding, trafficking, location, and degradation of the entire set of proteins in the cell – the proteome. This complex network regulation is essential for all living organisms and its disturbance contributes to age-related diseases and influence life span.

Neurodegenerative diseases such as Alzheimer's, ALS, and Parkinson's are devastating conditions characterized by deterioration of neurons (nervous system cells) and/or spinal cord. These diseases have common features: they usually strike in mid to late-life and are accompanied by an accumulation of protein aggregates inside neurons. As a consequence of the increased age of our population, the percentage of people affected by these diseases increases steadily. Therefore, finding treatments to limit the damage of neurodegeneration is a pressing medical and societal need, and it critically depends on the understanding of how and why protein aggregates form during brain aging.

An international team led by researchers from the Leibniz Institute on Aging - Fritz Lipmann Institute (FLI) in Jena, Germany and the Scuola Normale Superiore in Pisa, Italy, together with the Centre for Misfolding Diseases in Cambridge, UK and the National Hellenic Research Foundation in Athen, Greece, has now used state-of-the-art transcriptomic and proteomic methods to investigate the chain of molecular events that lead to loss of protein homeostasis during brain aging. The researchers used Nothobranchius furzeri (killifish) as a model of aging to study mechanisms triggering protein homeostasis dysfunction. This fish species is the shortest-lived vertebrate bred under laboratory conditions - they have a life span of only 3 - 12 months! Age-dependent processes are exacerbated in this species, making it easier to detect changes in the concentration of RNAs and proteins, as compared to other model organisms. Also, aging induces in this fish pathological changes that mimic those typical of human aging, making it a practical vertebrate system for studying age-related neurodegenerative disorders.

"In order to identify the molecular events in the aging process that are responsible for the loss of protein homeostasis during brain aging, we used mass spectrometry-based proteomics in combination with RNA sequencing and analyzed protein aggregates in the brains of killifish of different ages," says Dr. Alessandro Ori. The researchers analyzed brains of killifish from three different age groups: young sexually mature fish (5 weeks after hatching, wph), adult fish without aging characteristics (12 wph) and old fish that already showed signs of neurodegeneration (39 wph).

Messenger RNAs are used by the ribosome in the cell to synthetize proteins, which are biologically active molecules. “Measuring RNAs levels is easier that measuring protein levels and scientists very often measure changes in RNA levels under the assumption that the abundance of the corresponding proteins will change in a similar direction. The first result of our study is that during aging almost half of the proteins are regulated in opposite direction with respect to their corresponding RNA. This was a real surprise!” said Prof. Alessandro Cellerino from the Scuola Normale Superiore in Pisa, Italy. The study has now been published in the journal Molecular Systems Biology.

Age-related loss of the stoichiometry of essential protein complexes
"When comparing the data for the different age groups, we found that almost half of the approximately 9000 proteins that we managed to quantify are affected by aging," says Dr. Alessandro Ori, group leader at FLI. These age-related changes result in abnormal regulation of proteins (subunits) that compose macromolecular protein complexes, the types of machinery responsible for all cellular activities. Protein complexes are built by different proteins that need to be assembled in specific ratios. Our cells have mechanisms to guarantee the proper building of these complexes by regulating the precise (stoichiometric) number of specific subunits. This tightly regulated process, however, is impaired in aging.

As Dr. Ori further explains, "there is a progressive loss of stoichiometry of protein complexes during aging, mainly affecting the ribosomes, which is one of the most important protein complexes in the cell, responsible for producing all other proteins." The researchers demonstrated that ribosomes do not get adequately formed in old brains and aggregate, potentially influencing vital functions in the cell. Aggregation of ribosomes is not exclusive to killifish but also happens in mice, suggesting it is a conserved feature of brain aging.

Decrease in proteasome activity as an early sign of brain aging

"Ribosome aggregation is something devastating for cell survival. We wanted to understand what is causing it. More than that, we tried to find an early event during aging that triggers aggregates formation", explains Dr. Erika Kelmer Sacramento, one of the first authors of the study that focused on the proteasome. Proteasomes are complexes of protein molecules that digest and recycle old or defective proteins and are an essential part of the protein homeostasis network ("garbage chipper" of the cell). The authors were able to show that proteasome activity is reduced early and progressively during the course of adult life and causes loss of protein complexes stoichiometry. They induced a reduction of proteasome activity during early adult life of the killifish using a specific drug for just four days and observed a premature aging signature including disrupted ratios of several protein complexes.

"As aging is the result of a chain of interconnected progressive events, it has been difficult to identify its early drivers. Decrease of proteasome activity is an early sign of brain aging, but is it relevant for aging of the entire organism? To answer this question, we correlated individual variations in proteasome activity with individual variations in lifespan," explains Prof. Cellerino. So the team also compared the gene expression data of more than 150 killifish with their lifespan. The analysis showed that the individuals' lifespan could be predicted based on changes in the expression of genes encoding for proteasomal proteins: fish that showed a greater decrease in proteasome transcripts at the beginning of life lived considerably shorter than fish able to maintain or increase proteasome expression. This finding supports the hypothesis that the reduction of proteasome activity is an early driver of aging in vertebrates.

"The FLI has made large investments in developing the killifish as a biological model. Our results show that this investment was well placed. The killifish revealed novel molecular aspects of aging: we were able to show for the first time that the maintenance of proteasome activity is an important factor for the correct stoichiometry of protein complexes involved in key biological functions such as protein synthesis, degradation, and energy production and ultimately for lifespan determination. These comprehensive results on RNA and protein regulation represent also a public resource that can be mined by scientific community, as it was the case for the genomic, transcriptomic and epigenetic resources previously generated at the FLI," says Prof. Cellerino summarizing the most important results.

"Further detailed mechanistic studies will show whether the changes that we have described during aging contribute to a functional impairment of these protein complexes, or whether they are themselves a response to the aging process," adds Dr. Ori. Ongoing and future projects will reveal whether maintaining or increasing proteasome activity could offer a way to counteract aging mechanisms and delay organ dysfunction at old age.

<
Decline of proteasome activity is an early event in brain aging, ultimately affecting other protein ...

Decline of proteasome activity is an early event in brain aging, ultimately affecting other protein complexes. In old brains, ribosomes are not properly assembled and aggregate. 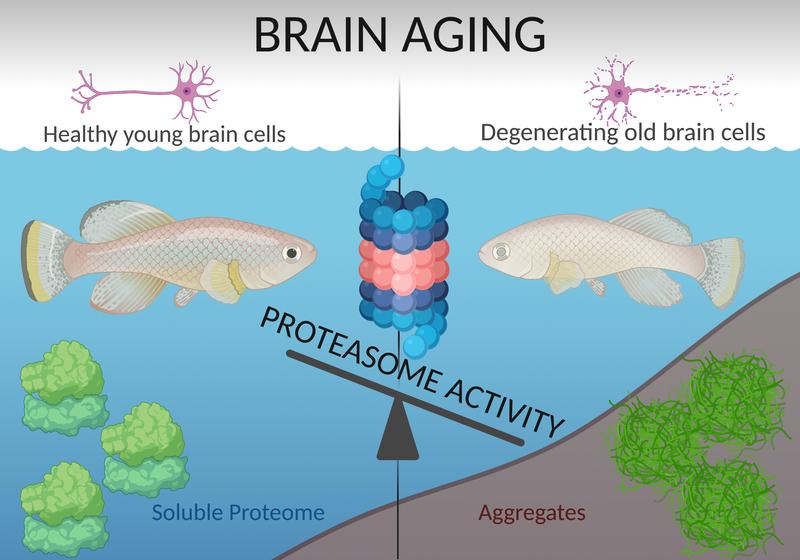