Professor Michael Grätzel from the École Polytechnique Fédérale de Lausanne (EPFL), Switzerland, receives this year's Diels Planck Lecture Award of KiNSIS (Kiel Nano, Surface and Interface Science), a priority research area of Kiel University. The interdisciplinary research association thus honors his outstanding research in the field of photochemistry. Grätzel is regarded as the inventor of a new type of efficient solar cell that can be manufactured particularly cost-effectively. This is the seventh time that KiNSIS has honored internationally renowned scientists in the nano and surface sciences for extraordinary research across the boundaries of disciplines. The award ceremony and a ceremonial address took place today (September 15, 2020) virtually as part of the online conference "27th Lecture Conference on Photochemistry" of the Gesellschaft Deutscher Chemiker (GDCh).

The functionality of the so-called "Grätzel cell" mimics the natural process of photosynthesis in plants. The role of the natural dye chlorophyll is taken over by sensitizing artificial dye molecules: they transfer electrons to a network of nanoparticles of semiconductor oxides, which generates electrical energy. In contrast to conventional solar cells made of highly pure and expensive silicon, relatively inexpensive materials are used for the Grätzel cell. In their further development, the organic dyes have now been replaced by the material perovskite and the liquid electrolyte by organic semiconductors. Today, the so-called perovskite solar cells achieve an efficiency of more than 25% in converting sunlight into electricity and are thus characterized by both efficiency and stability.

"Grätzel's solar cell represents one of the most promising approaches to the use of solar energy – it is not without reason that he has long been considered a candidate for a Nobel Prize in Chemistry. With over 1,600 scientific papers, which have been cited over 313,000 times to date, and an h-index of 250 he is one of the most influential chemists in the world," emphasized Rainer Herges, Professor of Organic Chemistry at the CAU and organizer of the conference, in his laudation. "We are delighted to honour Professor Michael Grätzel for his fundamental and pioneering work in energy research, one of the most important areas for society in the future. His work at the interface of chemistry, physics, and materials science also reflects the importance of interdisciplinary research, which is a central principle of KiNSIS," said the KiNSIS spokesperson Professor Jeffrey McCord.

At the GDCh conference, Grätzel gave the ceremonial address “Diels-Planck-Lecture” on his current research, being one of the highlights of the two-day event. Presentations from a total of eight countries reflected the breadth of current research in the field of photochemistry, including, for example, the highly topical research field of photopharmacology – a previously inactive substance is activated by light at the site of action, for example, a tumor, in order to avoid side effects on healthy tissue. The conference is organized every two years by the Divison of Photochemistry of the GDCh. Originally it was planned to take place at the CAU in Kiel this year. Due to the current corona pandemic, however, it was held as an online format in order to still offer professional exchange opportunities, especially for young scientists.

The award winner Michael Grätzel
Michael Grätzel was born in 1944 in Dorfchemnitz in Saxony, Germany, and studied chemistry at Freie Universität Berlin. In 1972 he received his doctorate in physical chemistry from Technische Universität Berlin. After a postdoctoral fellowship at the University of Notre Dame in the USA, he habilitated at Freie Universität Berlin in 1976 and then moved to the École Polytechnique Fédérale in Lausanne as an Associated Professor of Physical Chemistry. In 1981 he was appointed Professor and Director of the Laboratory of Photonics and Interfaces at the EPFL. In addition to several visiting professorships in Singapore, Paris, and Berkeley, he has received numerous high-ranking awards. Grätzel's h-index is 250.

The Diels-Planck-Lecture-Award
Since 2014, the members of the priority research area KiNSIS (Kiel Nano, Surface and Interface Science) of Kiel University have been awarding the Diels-Planck-Medal to outstanding international scientists in the field of nano and surface science. In a public lecture, the Diels-Planck-Lecture, the prize winners give insights into their current research. The name of the award goes back to the founders of the nanosciences in Kiel, the Nobel Prize winners Max Planck and Otto Diels. Max Planck, born in Kiel, was appointed to a professorship for theoretical physics at Kiel University in 1885. Otto Diels was a professor of chemistry in Kiel from 1915 to 1945. www.kinsis.uni-kiel.de/en/diels-planck-lecture-1

About KiNSIS
The nanoworld is governed by different laws than the macroscopic world, by quantum physics. Understanding structures and processes in these dimensions and implementing the findings in an application-oriented manner is the goal of the priority research area KiNSIS (Kiel Nano, Surface and Interface Science) at Kiel University. Intensive interdisciplinary cooperation between physics, chemistry, engineering, and life sciences could lead to the development of novel sensors and materials, quantum computers, advanced medical therapies, and much more. http://www.kinsis.uni-kiel.de/en

http://www.uni-kiel.de/de/pressemitteilungen/2020/217-DPL-2.jpg
Caption: The Diels Planck Medal is made from a silicon wafer in the clean room of the Kiel Nano Laboratory. It shows the Nobel Prize winners Max Planck and Otto Diels, the founders of the nanosciences in Kiel.
Copyright: Sebastian Maas, CAU

Professor Michael Grätzel from the École Polytechnique Fédérale de Lausanne (EPFL), Switzerland, is the winner of this year's Diels-Planck-Lecture-Award by the priority research area KiNSIS of Kiel University. 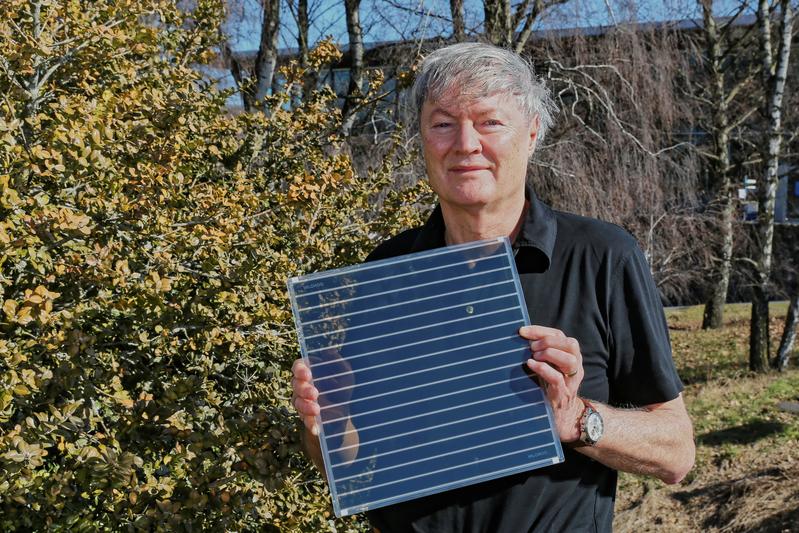 The Diels Planck Medal is made from a silicon wafer in the clean room of the Kiel Nano Laboratory. It shows the Nobel Prize winners Max Planck and Otto Diels, the founders of the nanosciences in Kiel. 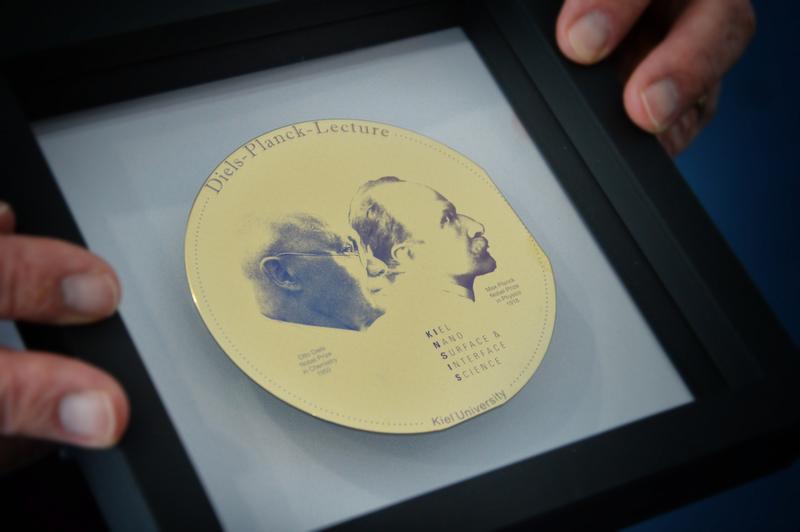