So close to stars that they can reach temperatures of up to 1,000 degrees Celsius: The phenomenon of hot dust rings - an accumulation of submicrometer-sized particles in the immediate vicinity of stars - was first discovered outside our solar system in 2006. However, due to their small size, the dust particles are difficult to observe and their origin is still unknown. For the first time, this phenomenon has now been observed in a new wavelength range with the extremely high resolution of the instrument MATISSE (Multi AperTure mid-Infrared Spectro Scopic Experiment) at the Paranal Observatory of the European Southern Observatory (ESO) in Chile. Also involved was the working group Star and Planet Formation of Kiel University. Their results, recently published in the journal Monthly Notices of the Royal Astronomical Society Letters, provide a central basis for further studies to explain the phenomenon of these dust rings.

Unique observations in a wavelength range not previously accessible

Dust rings, also known as "dust disks" or "debris belts", are a result of collisions of debris and small bodies that remain after the formation of planets - this has been known for several decades. In our solar system, for example, such an accumulation can be found between the orbits of Mars and Jupiter, the so-called "asteroid belt". However, the hot dust rings close to stars discovered in 2006 are a mystery. How could they form and survive for billions of years under the extreme conditions to which they are exposed?

Precise information about their spatial structure and material composition could help to understand the phenomenon of hot dust rings and their formation better. The now published observations with MATISSE are a central step towards this, the researchers hope. "We were able to observe the hot dust rings not only with a high resolution but also in the wavelength range around 3 micrometres, where these rings are particularly bright", says Sebastian Wolf, Professor of Astrophysics and Head of the research group Star and Planet Formation at Kiel University. "This area was not accessible with previous observing instruments and it now allows us a unique insight into this phenomenon."

First published data of the instrument after twelve years of development

Wolf's research group is part of an international consortium of scientists from Germany, France, the Netherlands, and Austria who had developed the observing instrument MATISSE over a period of twelve years. In 2019, the world's most powerful mid-infrared interferometric instrument went into operation at the VLTI (Very Large Telescope Interferometer) of the European Southern Observatory (ESO) in Chile. Up to four telescopes can be used to record the infrared radiation of celestial objects – this measuring method is known as interferometry. This means that the researchers do not receive direct images of the objects, but from the technical measurement, conclusions can be drawn about their appearance and properties. By combining four telescopes, MATISSE achieves an enormous resolution, which would correspond to that of a 200-metre telescope. With MATISSE's unprecedented precision, insights into the earliest development of planets and ultimately the formation of the solar system are possible.

This way, the research team, which included researchers from the University College London, the Large Binocular Telescope Observatory in Tucson (USA) and the Universities of Arizona, Cˆote d'Azur and Jena, as well as Kiel, observed the star "Kappa Tucanae". It is located in the constellation "Tukan", which is only visible from the southern hemisphere. The star is about two billion years old - less than half as old as our Sun - and about 69 light-years away from Earth. Based on the now collected data, the researchers were able to determine the exact position of the dust ring around "Kappa Tucanae" and the properties of the dust.

"That information are important requirements for finding the origin of the phenomenon," says Dr. Florian Kirchschlager, first author, a former research assistant in Wolf's group and now employed at University College London. "We are of course particularly happy that these are also the first data from the instrument to have been published at all". As part of his research at Kiel University, Kirchschlager carried out the feasibility study on the observations of "Kappa Tucanae". Because dust rings are not only tiny in the astronomical sense but also relatively faint. "This was challenging, even for MATISSE. The fact that the observations were nevertheless successful underlines the unique potential of the instrument," emphasises co-author Dr. Steve Ertel, who was a Ph.D. student in Wolf's research group and now works at the University of Arizona.

"The observational data now collected and evaluated form the basis for our further research on an explanatory model for the hot dust rings," says Wolf, deputy spokesman in the Research Unit FOR 2285 "Debris Disks in Planetary Systems", which is based at the Friedrich Schiller University Jena under the leadership of Professor Alexander Krivov.

https://www.uni-kiel.de/en/details/news/243-sternenstaub Link to release
http://www.kinsis.uni-kiel.de/en Understanding structures and processes in the nano dimensions and implementing the findings in an application-oriented manner is the goal of the interdisciplinary priority research area KiNSIS (Kiel Nano, Surface and Interface Science) at Kiel University. This cooperation could lead to novel sensors and materials, quantum computers, advanced medical therapies and much more.

The observation instrument MATISSE of the European Southern Observatory ESO combines data from four infrared telescopes. Researchers from Kiel have co-developed it and now use it to study hot dust rings around stars.

At 2635 metres above sea level, ESO's Paranal Observatory on the Chilean coast offers the best conditions for astronomical observations. 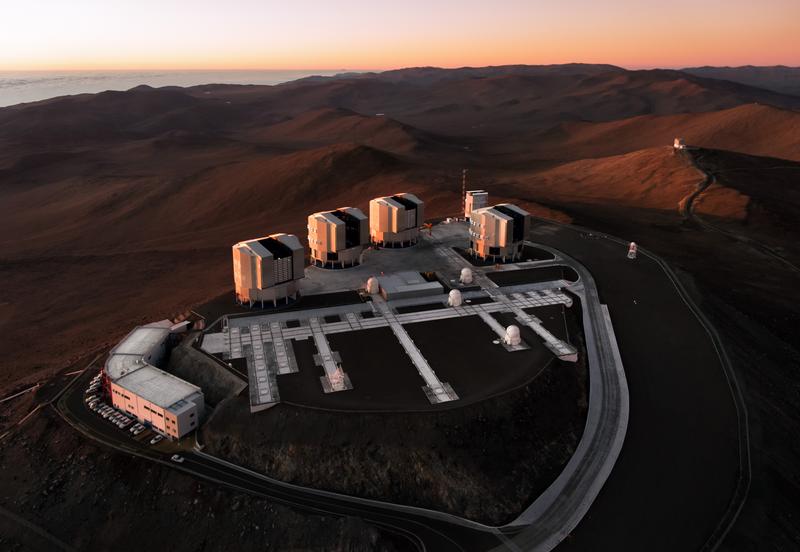