Neuronal critical periods are limited phases of lifetime during which the plasticity of neural connections is at its maximum and the development of the brain is adapted to the environment. Researchers at the Scuola Normale Superiore in Pisa and the Leibniz Institute on Aging (FLI) in Jena have discovered the role of a small microRNA (miR-29) in these learning-dependent phases of plasticity. A premature increase in miR-29 concentration in young mice blocks cortical plasticity, whereas blocking miR-29 in adult animals induces plasticity typical for younger sensitive phases; an indication that miR-29 is an age-dependent regulator of developmental plasticity.

Jena/Pisa. Postnatal development of the brain after birth is characterized by temporary, function-specific windows of high plasticity (critical or sensitive periods). During these phases, certain areas of the brain further develop through several maturation and differentiation processes, where neuronal connections quickly create and increase the brain's plasticity. Natural language acquisition in infants is the best-known example of such a sensitive phase.

Neuronal plasticity gives our brain the ability to adapt to new demands throughout our lives. However, this is often limited in the adult brain, so that learning processes are more laborious. To identify cellular and molecular mechanisms that open and close these sensitive phases in relation to aging, researchers of the Scuola Normale Superiore (SNS) in Pisa, Italy, in cooperation with the Leibniz Institute on Aging – Fritz Lipmann Institute (FLI) in Jena, Germany, and other partners, studied the plasticity of the visual cortex in mice.

Plasticity of the visual cortex

"Neuronal nets in the visual cortex adapt to visual stimuli to the maximum extent in sensitive developmental phases. This allows us to identify important regulators of brain plasticity", say the senior authors of the study published in EMBO Reports, Prof. Alessandro Cellerino, SNS and associated group leader at FLI in Jena and Prof. Tommaso Pizzorusso, University of Florence and Institute of Neuroscience, NRC, in Pisa. One paradigm posits that plasticity of ocular dominance passively decays with age; however, it is becoming increasingly clear that plasticity levels are set by the coordinated action of age- and experience-dependent molecular processes that either actively promote or suppress circuit plasticity.

"Visual cortical circuits, which are part of the visual system and enable vision, exhibit strong plasticity during early life and are later stabilized by molecular brakes that limit excessive adaptation of links beyond a critical period," explains Prof. Cellerino. However, the underlying mechanisms that coordinate the expression of these factors during the transition from development to adulthood remain unknown.

MiR-29 - age dependent control of plasticity in the visual cortex

To identify factors that regulate postnatal development of the visual cortex, the research team analyzed miRNA/RNA data sets from the developing visual cortex of mice. They compared them at different time points: P10, day 10 after birth and immediately before eye opening and the onset of the sensitive phase, and P28, when the mouse cortex has reached functional maturity.

Their results showed the microRNA family miR-29 is an age-dependent regulator of developmental plasticity in the visual cortex. "With a 30-fold increase, miR-29a was the most highly upregulated miRNA during the sensitive phase," explained Prof. Cellerino from FLI/SNS. The regulation of the miR-29 family is strikingly conserved in fish, mice and humans. In addition, more than half of the targets regulated by miR-29 are down-regulated with age, including key regulators of brain plasticity. This indicates that miR-29a is an important regulator of downstream developmental processes.

Further analysis showed that a premature increase in miR-29a concentrations in young mice blocked juvenile eye dominance plasticity and caused an early appearance of perineural nets (PPNs). PPNs are specialized structures in the central nervous system that are responsible for synaptic stabilization in the adult brain. In the developing as well as in the adult brain they play a crucial role to break plasticity and maintain existing connections between nerve cells.

In addition, the researchers were able to show that blocking miR-29a in adult animals reversed the developmental downregulation of miR-29a targets and induced a form of ocular plasticity with a typical physiological and molecular signature of plasticity in sensitive phases.

In summary, the data now published in the journal EMBO Reports indicate that miR-29a is an important regulator of plasticity breaks that promotes the age-related stabilization of visual cortical connections. The observation that miR29a is a remodeler of mature neural networks opens new and promising therapeutic perspectives for miR-29a and other miR-29 family members for promotion of brain plasticity during aging and regeneration of brain damages.

The Leibniz Institute on Aging – Fritz Lipmann Institute (FLI) - upon its inauguration in 2004 - was the first German research organization dedicated to research on the process of aging. More than 350 employees from around 40 nations explore the molecular mechanisms underlying aging processes and age-associated diseases. For more information, please visit http://www.leibniz-fli.de.

The Leibniz Association connects 96 independent research institutions that range in focus from natural, engineering and environmental sciences to economics, spatial and social sciences and the humanities. Leibniz Institutes address issues of social, economic and ecological relevance. They conduct basic and applied research, including in the interdisciplinary Leibniz Research Alliances, maintain scientific infrastructure, and provide research-based services. The Leibniz Association identifies focus areas for knowledge transfer, particularly with the Leibniz research museums. It advises and informs policymakers, science, industry and the general public. Leibniz institutions collaborate intensively with universities – including in the form of Leibniz ScienceCampi – as well as with industry and other partners at home and abroad. They are subject to a transparent, independent evaluation procedure. Because of their importance for the country as a whole, the Leibniz Association Institutes are funded jointly by Germany’s central and regional governments. The Leibniz Institutes employ around 20,000 people, including 10,000 researchers. The financial volume amounts to 1.9 billion euros. See https://www.leibniz-gemeinschaft.de/en/ for more information.

<
The plasticity of the brain decreases strongly with age. The increase of miR-29a stabilizes the neur ...

The plasticity of the brain decreases strongly with age. The increase of miR-29a stabilizes the neuronal connections and thus ends the critical period. 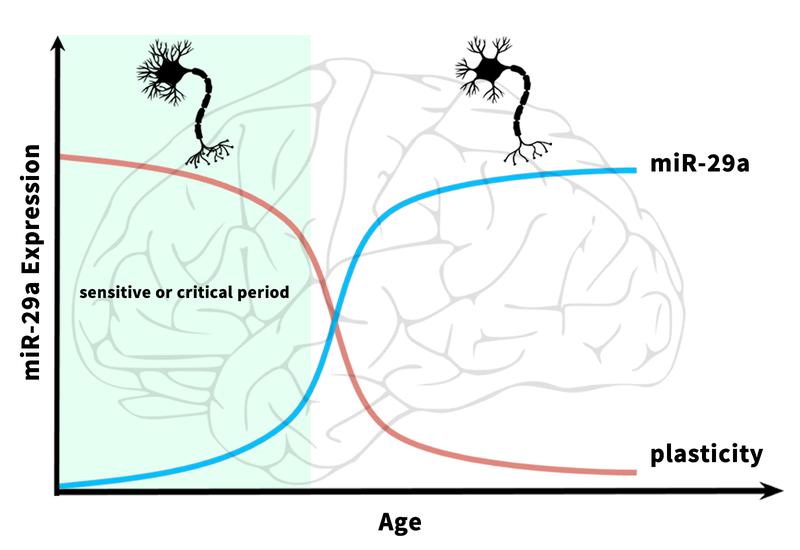