Home > Pressemitteilung: Ants swallow their own acid to ...

Ants swallow their own acid to protect themselves from germs

Ants use their own acid to disinfect themselves and their stomachs. A team from Martin Luther University Halle-Wittenberg (MLU) and the University of Bayreuth has found that formic acid kills harmful bacteria in the animal's food, thereby reducing the risk of disease. At the same time, the acid significantly influences the ant's intestinal flora. The new study was published in the journal "eLife".

Formic acid is one of the simplest organic acids. It is produced in a special gland in the abdomen of numerous species of ant. "There was a long-standing assumption that the acid only served to ward off predators, for example insects and birds," says Dr Simon Tragust from the Institute of Biology at MLU, who co-led the new study alongside Professor Heike Feldhaar from Bayreuth. A couple of years ago he was able to show that ants also use the acid in brood care, for example, to disinfect their brood and prevent the spread of harmful fungi.

The new study was based on an observation of the animals’ behaviour. "Whenever ants swallow food or water, they start cleaning their hindquarters afterwards," says Tragust. The researcher wanted to figure out why they do that. "For one thing, the behaviour didn’t seem to be linked to digestion, because ants do this even after they have only ingested water," he adds.

Through several experiments the team was able to show that ants disinfect themselves on the inside. "When the ants were able to access the acid, their chances of survival increased significantly after eating food enriched with pathogenic bacteria," explains Tragust. What’s more, the beneficial effect was not limited to an individual animal. Ants pass food from their mouth to the mouths to their nest mates. "This is a major potential source of infection," says Tragust. If the ant passing on the food has previously ingested the acid, the receiving ant had a lower risk of falling ill. According to Tragust, this behaviour might reduce the spread of infection within the ant colony.

The results of the new study also explain why some ants have very few bacteria in their digestive tracts; those that are present are primarily acid-resistant microbes. "Acid swallowing acts as a filter mechanism, structuring the ant’s microbiome," explains Tragust. Ants are one of just a handful of animals with extremely acidic stomachs. "Otherwise this is only known to occur in humans and a few other vertebrates," says Tragust. Unlike ants, stomach acid in humans is produced directly in the stomach, but the effects are the same: The acid kills germs in the food and influences the microbiome of the gut.

Incidentally, how formic acid precisely works is still a mystery, but it and other organic acids have long been used as additives in animal feed to kill harmful germs.

An ant (Camponotus cf. nicobarensis) trying to swallow formic acid from its acidopore 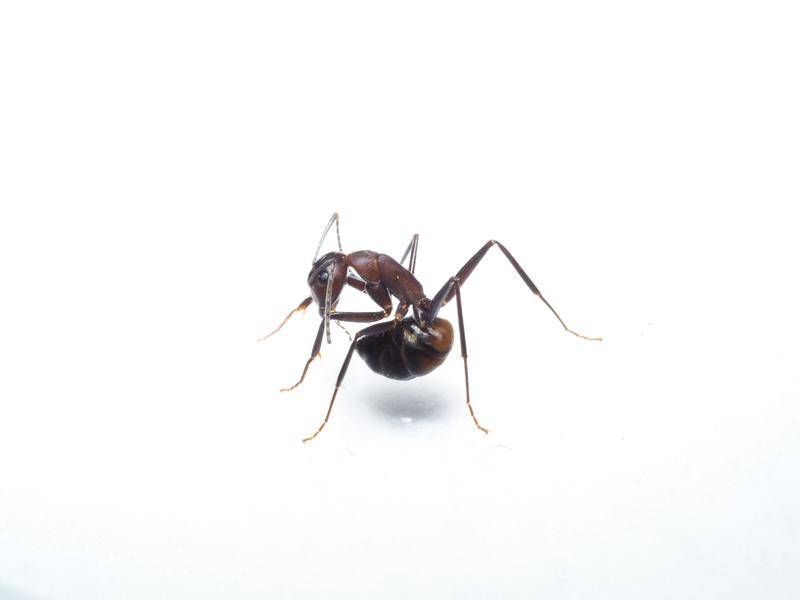