On November 18, 2020, the DKRZ and Atos officially signed the five-year contract for the delivery of a new supercomputer based on the latest BullSequana XH2000 technology. The new system, being worth 32.5 million euros, increases the computing power of the DKRZ fivefold compared to the currently operated high-performance computer “Mistral”, which Atos provided in 2015. The new supercomputer will be named “Levante” and will be put into operation in two phases. The first configuration level will be ready to start its operation at the DKRZ in late summer 2021, the final phase in January 2022.

On November 18, 2020, the DKRZ and Atos have officially signed the five-year contract for the delivery of a new supercomputer.

*Technical specifications*
The Atos solution is based on its BullSequana XH2000 supercomputer and will be one of the first equipped with the next generation of AMD EPYC x86 processors. The interconnect uses NVIDIA Mellanox InfiniBand HDR 200G technology and the data storage solution relies on DDN equipment. The final system will consist of around 3,000 computing nodes with a total peak performance of 16 PetaFlops, 800 Terabytes main memory and a 120 Petabytes storage system.

Just as a new, more powerful telescope provides more detailed images from space, a more powerful supercomputer allows for more detailed simulations and thus deeper insights into climate events. This significant increase in computing power will enable researchers at DKRZ to use regionally more detailed climate and earth system models in future, to include more processes in calculations, to simulate longer time periods, or to more accurately capture natural climate variability using ensemble calculations and thus reduce uncertainties. This is accompanied by a strong increase in the data that is calculated and then stored and evaluated. The BullSequana is an efficient computing and data management solution, essential for climate modelling and the resulting data volumes, to promote environmental research and deliver more reliable, detailed results.

Prof. Thomas Ludwig, CEO at DKRZ says: "Our high-performance computer is the heart around which our services for science are grouped. We’re really happy to be working with Atos again. With the new system, our users will be able to gain new insights into the climate system and deliver even more detailed results. This concerns basic research, but also more applied fields of research such as improved current climate projections. This way, we help gain fundamental insights for climate change adaptation.”

Damien Déclat, Group VP, Head of HPC, AI & Quantum Business Operations at Atos, explains: "With our strong expertise and experience we have been able to successfully design the DKRZ solution integrating it efficiently with the BullSequana XH2000 system’s best-of-breed components to optimize DKRZ’s production workloads. We look forward to continuing this joint effort to anticipate the next phases as well as to adapt applications and requirements to the next processor generation and other accelerating components."

In January 2021 numerous modifications will start in the computer hall in preparation for the setup of HLRE-4. The launch is planned in two phases: The first configuration level will start its operation in August 2021, the final phase of the new computing system will be completed in January 2022.

The name of the HLRE4 is already certain: In an online vote to find a name, "Levante" prevailed over the other eight suggestions with over a quarter of the more than 300 votes cast. The name is based on the name of a warm wind of strength 3 to 5, which often follows the French wind Mistral.

*Financing*
The new system is worth 32.5 million euros, which is provided by the Helmholtz Association of German Research Centres, the Max Planck Society and the Free and Hanseatic City of Hamburg. 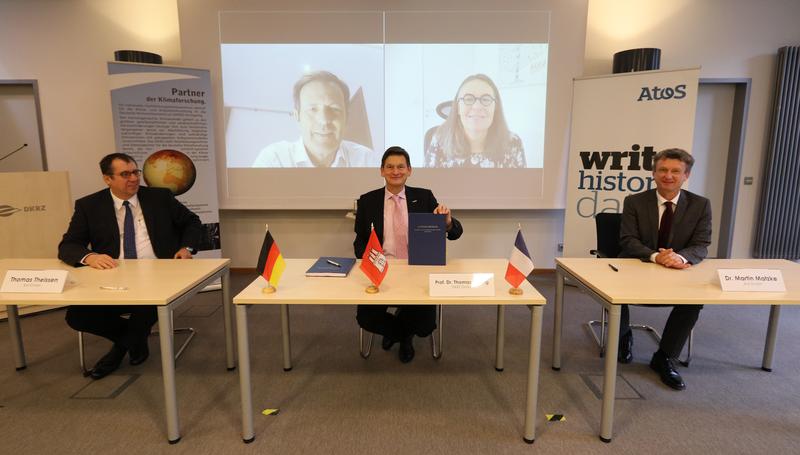