Home > Pressemitteilung: Teamwork in a molecule

Teamwork in a molecule

Chemists at the University of Jena harness synergy effect of gallium

Chemists at Friedrich Schiller University Jena have demonstrated the value of “teamwork” by successfully harnessing the interaction between two gallium atoms in a novel compound to split the particularly strong bond between fluorine and carbon. The gallium compound is also cheaper and more environmentally friendly than conventional alternatives.

“Such reactions are usually carried out using transition metals, such as nickel or iridium,” explains Prof. Robert Kretschmer, Junior Professor of Inorganic Chemistry at the University of Jena, whose work has been published in the prestigious Journal of the American Chemical Society. “However, transition metals are expensive and harmful to the environment, both when they are mined and when they are used. Therefore, we are trying to find better alternatives.” That two metals can do more than one is already known in the case of transition metals. “However, there has been hardly any research on the more sustainable main-group metals of the periodic table,” Kretschmer adds.

“Our compound contains two chemically identical gallium atoms,” says Kretschmer. “In tests with a series of fluorine-containing hydrocarbon compounds, we saw that these two atoms together are capable of removing a fluorine atom. Using X-ray structure analysis, we were able to prove that one gallium atom binds the fluorine and the second binds the other part of the hydrocarbon compound.” This is the first step needed for catalysis.
“Now that this step has been achieved, we can consider how to develop this concept further,” explains Kretschmer. “It would of course be desirable if, at the end, the reaction could be continued to achieve a complete catalytic cycle.” However, this will probably involve a different metal. Kretschmer notes: “Gallium as an element was a first step here. Our goal is ultimately to harness the metal that occurs most frequently on earth: aluminium.”

Dr. Helmar Görls uses an X-ray diffractometer to study single crystals grown from new compounds at the Institute of Inorganic and Analytical Chemistry at the Friedrich Schiller University in Jena. 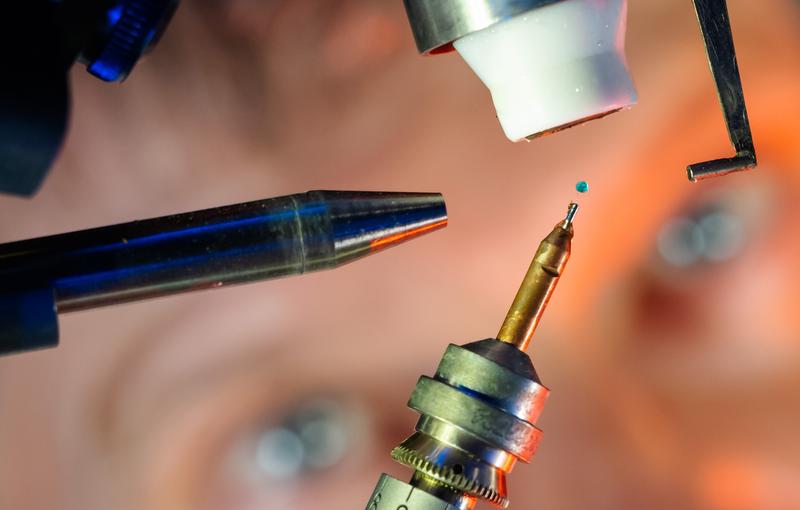