Home > Pressemitteilung: A precise mixture of light and sound ...

A German-polish research team from Augsburg, Münster, Munich and Wrocław successfully mixed nanoscale sound waves and light quanta. In their study published in Optica the scientists use an ’artificial atom’ that converts the vibrations of the sound wave to single light quanta - photons - with unprecedented precision. The demonstrated fundamental principle marks an important step toward the development of future hybrid quantum technologies

Light and sound waves form the backbone of modern communication technology. While light transmits data across the globe in fibre optical network, sound wave-based chips are used in the wireless communication between routers, tablets or smartphones. At the dawn of the new era of quantum communications, these two key technologies have been made fit for the future. Here, so-called hybrid quantum technologies are key.

They combine dissimilar quantum systems to exploit their unique strengths while at the same time overcoming their individual shortcomings. ’In this field, vibrations of the crystal lattice are especially promising,’ explains Professor Hubert Krenner, who leads the study at the University of Augsburg. He adds: ’Phonons, as we physicist call these vibrations, stretch and compress literally any object that is embedded in the crystal and this way alter its physical properties.’ In their study the researchers employ nanometer-scale surface acoustic waves, SAWs, to induce vibrations of a single artificial atom, a so-called quantum dot, and thereby change the color of the emitted light. Dr Daniel Wigger, who investigates the coupling between quantum dots and phonons at the University of Münster and at Wrocław University of Science and Technology is excited: ’In our simulations we were able to almost perfectly reproduce the spectra measured in Augsburg by including the nanoscale sound waves like a phonon laser into our model.’ The reported research results are a milestone for the development of hybrid quantum technologies because the quantum dot emits single light quanta, so-called photons, that are precisely clocked by the sound wave. Dr Matthias Weiß, who completed his PhD at the Physics Institute in Augsburg last summer, adds: ’It is fascinating that the spectral lines of the quantum dots fabricated in Munich are so extremely sharp. This allowed us to observe how the spectral line was shifted by the tiny amount of energy of a single phonon.’

The research team was even able to make another crucial step ahead. The scientists used a second sound wave with a different frequency. In the spectrum of the quantum dot new spectral lines appeared which correspond to the sum or difference of the frequencies of the two sound waves. Professor Hubert Krenner: ’This phenomenon is well known in optics for decades as wave mixing. Laser pointers use this process to generate green light. In our work, the lasers are sound waves which we mix with light quanta.’ The precision of this phenomenon is breathtaking. Matthias Weiß reports: ’When I changed the frequency of one of the two sound waves by the tiniest amount of one part in a trillion, I observed how the spectrum oscillated with a period of approximately half a day, just as predicted.’ The quantum dot itself represents a so-called qubit, the basic unit in quantum information technology. Daniel Wigger adds: ’In our model we considered the quantum dot as a qubit, which is modulated by the sound wave. Besides that, we did not have to make any assumptions.’ The scientists are convinced that the exceptional agreement between the calculations and the experimental results shows, that their very general model describes all key properties accurately. Therefore, it should also be applicable to many other qubit systems.

For their cutting edge research, the groups in Germany and Poland could build on a longstanding track-record. Professor Tilmann Kuhn from the University of Münster and Professor Paweł Machnikowski from Wrocław University of Science and Technology have conducted pioneering work on the theoretical description of the coupling between quantum dots and phonons, which Hubert Krenner studies in experiment. Professor Paweł Machnikowski: ’In this project we have benefited a lot from the unique link between theory and experiment and from our rich joint experience.’ Also Professor Tilmann Kuhn from Münster is happy: ’So far, phonons have often been considered as a bothersome evil and most of the time their influence was suppressed as much as possible. In this work we show that phonons can in fact be used to deliberately control quantum states.’

The work now published in Optica is only a first step towards future phononic quantum technologies. Matthias Weiß has already performed new experiments, whose results Daniel Wigger currently brings into agreement with his theory. 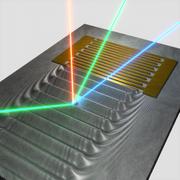 <
Laser light (green) is mixed with the sound wave by the artificial atom. This process changes the co ...
Matthias Weiß
Universität Augsburg

Laser light (green) is mixed with the sound wave by the artificial atom. This process changes the color of the emitted light quanta (red and blue) with extremely high precision. 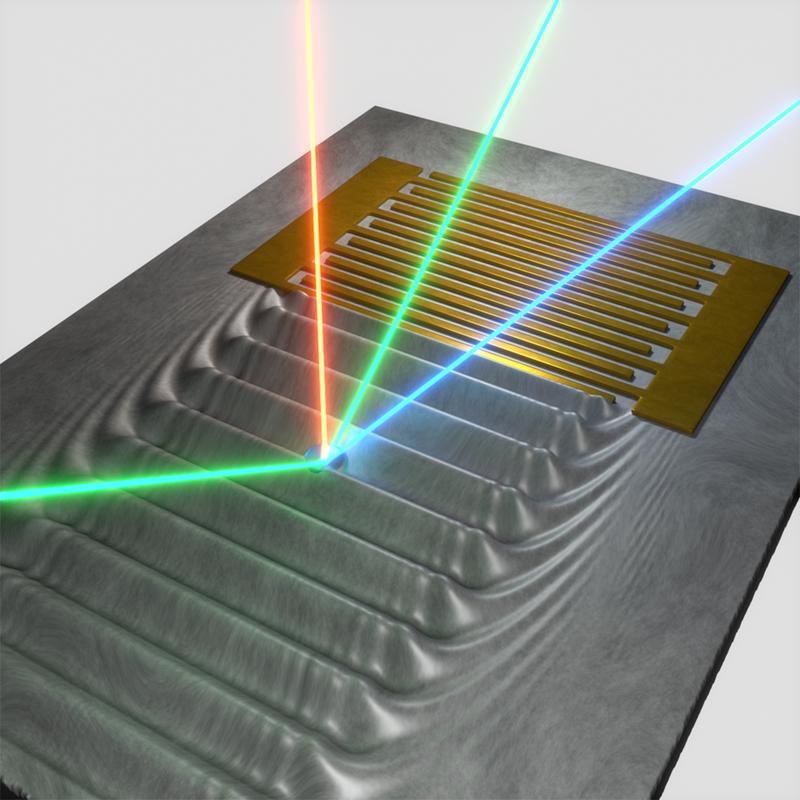