Researchers at GMI – Gregor Mendel Institute of Molecular Plant Biology of the Austrian Academy of Sciences, the University of North Carolina at Chapel Hill and The Howard Hughes Medical Institute (HHMI) use two complementary approaches to unveil a co-evolutionary mechanism between bacteria and plants and also explain complex immune response patterns observed in the wild. Together the papers change the way scientists have been thinking about the relationship of a bacterial antigenic component with its plant immune receptor. The two papers are published back to back in the journal Cell Host & Microbe.

Immune responses have developed in virtually all organisms over evolutionary time scales to protect them from foreign invaders. A central aspect of the immune response of higher organisms, i.e., plants and animals, is the use of sensory systems that detect and respond to “non-self” molecular signals. These molecular signals generally determine the survival chances of the pathogen, a factor that prevents them from being eliminated by natural selection as a means to evade host recognition. Their evolutionary conservation is thus due to the functionality of these molecular signals to the foreign invader. However, the negative evolutionary pressure to maintain this functionality is counterbalanced by the positive evolutionary pressure to mediate the pathogen’s immune evasion. The dissection of these co-evolutionary forces through synthetic and reverse evolutionary methods is one of the two research approaches that researchers from the Belkhadir lab at GMI and the Dangl lab at UNC- Chapel Hill team up to investigate. In an orthogonal approach, they also inquire into the natural diversity of molecular antigenic determinants (epitopes) in plant-colonizing bacterial communities (commensal communities) and map the complex immune response patterns they trigger in the plants. Jeffery Dangl, John N. Couch Distinguished Professor at UNC-Chapel Hill and an HHMI investigator explains: “To date, most science in this field has used a handful of epitopes. We sampled thousands, derived from synthetic biology and commensal communities. This depth of analysis allowed us to uncover a rich diversity of host response mediated by a single receptor.”

The researchers examine how the Arabidopsis immune sensor FLS2 (flagellin sensing 2) influenced the evolution of its interacting epitope on the Pseudomonas flagellin, and how this, in turn, influenced Pseudomonas motility. Using reverse evolutionary methods, Parys et al. uncover a new mechanism of co-evolutionary force between FLS2 and flagellin, and frame it as a molecular form of the scarcely studied theory of antagonistic pleiotropy (AP) in plant immunology. AP is the ability of a gene to induce opposing effects in different contexts, a prevailing theory for the evolutionary origin of aging in humans. The researchers demonstrate that AP fosters stable colonization of Arabidopsis by commensal communities by weighing out bacterial motility against sensor detection. This strategy results in flagellin epitopes that either mildly activate or outright block the receptor (gain in virulence), while losing in motility as a trade-off (loss in virulence). Even more excitingly, they find signatures of these synthetic experiments in naturally occurring commensal communities, suggesting that natural microbiomes might be less dependent on flagella-mediated motility and willing to trade it off against another form of immune evasion in order to stay in harmony with the plant.

In the second, natural sampling approach, Colaianni et al. demonstrate that immune evasion mechanisms in plant root commensal communities are rampant and are a determining factor of the community’s structure. Moreover, this conceptual breakthrough is accompanied by the corroborating findings of complex immune response fine-tuning mechanisms in Arabidopsis. The diversity of the ligand epitopes is translated in a complexity of the immune responses engaged by the plant, which is capable of detecting threshold variations in its microbiome, and thus, discriminating between “friend and foe.”

Asked about possible applications of this joint work, GMI group leader Youssef Belkhadir elaborates: “Sometimes, it is good to know how to turn on an immune response, but we often forget that, sometimes, it might also be good to turn it off. For example, you could help a growth-promoting microbe better colonize the plant by providing it with an additional way to evade the plant’s immune response. And here we discovered synthetic antagonistic peptides that could do just that.”

Back to the (plant) roots

This collaboration draws on an exchange in expertise between the alternating first authors of the two publications, but also refreshes long-dating, outstanding, scientific contacts. In fact, Nicholas Colaianni, Ph.D. student in the Dangl lab at UNC-Chapel Hill, is a computational expert, whereas the main fields of expertise of Katarzyna Parys (former Ph.D. student in the Belkhadir lab) lie in biochemistry and wet lab genetics. Colaianni also visited the Belkhadir lab at GMI and both he and Parys benefited from hands-on training in each other’s field of expertise. In addition, as a third co-first author on both publications, Ho-Seok Lee, postdoctoral fellow in the Belkhadir lab, contributed his skills in microscopy imaging.

After many years of separate research, the two main principal investigators who share seniority and alternate corresponding authorships on the two publications, decided to make a comeback together. The shared seniority also includes Corbin Jones, Biology Professor at UNC-Chapel Hill and Colaianni’s co-mentor. Youssef Belkhadir is a UNC-Chapel Hill alumnus who worked with Jeffery Dangl as a Ph.D. student. Referring to the UNC Tar Heels basketball team that Dangl loves, Belkhadir says “17 years after I co-authored my first paper with Jeff, it was a lot of fun to get on the court and ‘slam-dunk’ it with him once more!”. Dangl adds “Just like basketball, science is a team effort and the best teams play fluidly together.”

The motility of plant-colonizing bacteria is largely dependent on flagellin. In A. thaliana, a short antigenic component from flagellin, termed flg22, is sufficient to induce a plant immune response through the receptor FLS2 (flagellin sensing 2, beige) and its co-receptor BAK1 (BRI1-associated kinase 1, gray). The relevance of flagellin for motility contributes to its conservation in bacteria and places it under a negative evolutionary pressure. On the other hand, the immunogenic action on the plant receptor places flg22 under a positive evolutionary pressure as a mechanism of plant immune response evasion. Although beneficial for decreasing FLS2 stimulation, mutations to flg22 can be detrimental for bacterial motility. Hence, mutations on flg22 that promote immune evasion can also decrease virulence. Parys et al. identify in this co-evolutionary mechanism between flg22 and FLS2 a molecular form of antagonistic pleiotropy, i.e., the ability of a gene to induce opposing effects in different contexts.
©Parys/GMI/UNC-Chapel Hill 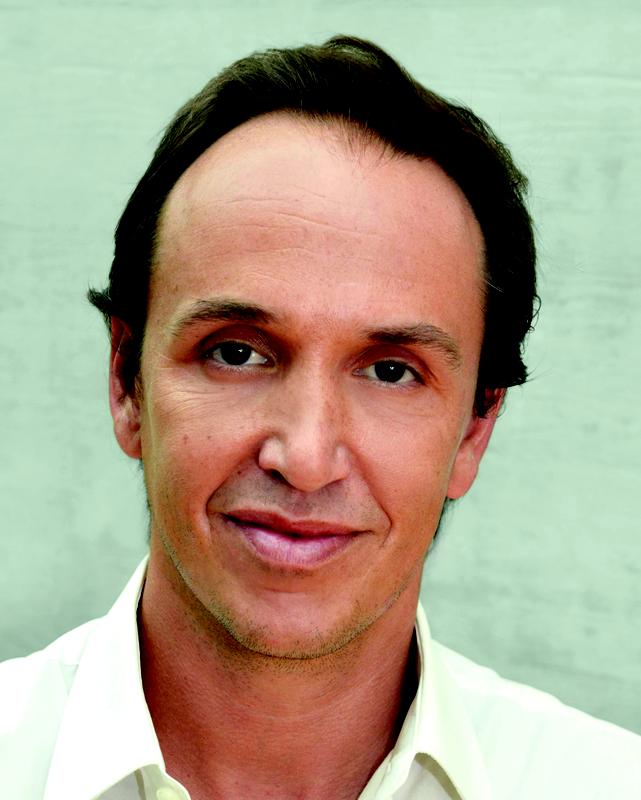