Home > Pressemitteilung: Time Bombs at the Bottom of the Ocean

Time Bombs at the Bottom of the Ocean

Hundreds of military wrecks holding remaining munition on board lie at the bottom of the North Sea. The European “North Sea Wrecks” project investigates how dangerous the remains from two world wars are for humans and the environment. Headed up by researchers from the U Bremen Research Alliance, the project has led to a touring exhibition that tells the stories of seamen, ships, and their enduring legacy.

The British lieutenant Oswald Frewin described the demise of the vessel MAINZ as follows: “The last part that I saw of her was a complete wreck, the whole midship a smoking inferno. One cannon on the foredeck and one at the aft still spewed fire and brimstone much like a wounded wild cat gone crazy.”

At around 2:10 p.m. on August 28, 1914, the 130.50 meter long and 14 meter wide vessel sank as the result of repeated artillery and torpedo hits. The ship was one of the first victims of the “Battle of Helgoland Bight,” the first large sea battle of the First World War. The majority of the crew, which was comprised of 437 men, was rescued by the British. Torpedoes, grenades of varying sizes, and gun munition also sank to the ocean floor.

--- “Some things are completely corroded on the ocean floor, others are entirely intact. Everything is there, the whole works.” ---

For 106 years, the MAINZ has been resting at a depth of around 30 meters roughly 40 sea miles west of Helgoland. Her relics may still be dangerous. “The level of danger is not dependent on the munition’s age,” says Matthias Brenner, marine biologist at the Alfred Wegener Institute, Helmholtz Centre for Polar and Marine Research (AWI). “Some things are completely corroded on the ocean floor, others are entirely intact. Everything is there, the whole works.”

And there’s a lot of it. Immense quantities actually. The amount of munition in the German North Sea and Baltic Sea is estimated as being 1.3 to 1.6 million tons. There are the remains of sunken ships, airplane wrecks, or sea mines, but also mainly grenades, bombs, and shells that were simply thrown into the sea during and after the Second World War. A freight train loaded with these munition remains would stretch from Kiel to Rome.

“’North Sea Wrecks’ is an absolute pioneer project,” explains Dr. Sven Bergmann, cultural anthropologist at the German Maritime Museum (DSM) / Leibniz Institute for Maritime History and coordinator of the project. “It is the first time that the effects of war remains on the North Sea’s flora and fauna are being investigated.” As a source of toxic substances, they are possibly not only endangering humans and the environment. The explosive object locations also pose a risk to the increasingly commercial use of the North Sea, for example for offshore wind parks, aqua cultures, and private and commercial shipping. “No one knows exactly what is located where,” says Bergmann.

With four million euros, the European Union is co-financing the project, in which Belgium, the Netherlands, Denmark, and Norway are involved as countries bordering the North Sea. Nine partners are involved – including three members of the U Bremen Research Alliance: DSM, which holds the project lead position, AWI, and the University of Bremen. The underwater archeologist Dr. Philipp Grassel represents the latter. What the remains on the ocean floor could trigger was of no interest for decades. “The motto ‘out of sight, out of mind’ reigned. The munition remains were not determined a problem,” explains Grassel. This only changed when findings from investigations in the Baltic Sea were presented, which had been carried out at the demand of countries such as Poland and Lithuania. Severe strains due to toxic substances were ascertained. “A TNT cocktail is drifting through the entire western Baltic Sea,” states Matthias Brenner with regard to the problem. Fish in these dumping areas have a far higher tumor rate; the deposits in the mussels are worrying on a toxicological level. “We suspect that the situation is much the same in the North Sea,” fears Brenner.

--- “A TNT cocktail is drifting through the entire western Baltic Sea. We suspect that the situation is much the same in the North Sea.” ---

But that’s not certain. The tidal range, currents, and thus the water exchange are much higher, or rather stronger in the North Sea than in the inland Baltic Sea. That also applies to the sediment movements on the seabed that cover the wrecks and then only reveal them again years later. “We are investigating if it is possible to determine anything. If not, then that’s also a result,” states Bergmann.

At least 120 military wrecks lie in the German exclusive economic zone alone. Most of their positions are known but what is not known is what exactly they had on board when they sunk. Clarifying this is one of the first tasks of the research project. The Military Archive in Freiburg, where logbooks, war diaries, and other documents are being stored, is helping. It is often, but not always, the case that such documents sate how much munition the individual ships had on board and how much they used during the battles. “In the end, we are then able to estimate the amount of remaining munition,” says Grassel.

As not every individual sunken ship can be analyzed, the scientists have used this data to identify example wrecks of various types from various periods across the North Sea. These include submarines, destroyers, pickets, and sperrbrecher. The latter were often fishing vessels that had been acquired by the war navy and had been equipped with guns for use in battle.

“We then take samples from these wrecks,” is what Grassel says when explaining the approach. In the case of MAINZ, this is done with the help of the research vessel HEINCKE, which is part of the AWI fleet. The researchers from the U Bremen Research Alliance stay close to the wreck for five days. Initially, the seabed is scanned in order to exactly determine the location of the remains. Then robots approach the MAINZ and record film, which in turn forms the basis for the divers’ work. They then take sediment, water, and scratch samples from the organisms on the wreck’s shell and the munition. Fish, starfish, and algae is also analyzed. Additionally, mussels are released and then collected again during a second expedition. This is done to assess if the mussel meat then contains TNT or decomposition products of explosives and how the animals react to the contact with toxic substances.

The researchers fill out a risk analysis for each individual wreck. Several disciplines are involved in this project, including toxicologists, geologists, database specialists, modelers, historians, and also legal experts. The involvement of legal experts is down to the fact that the fields of responsibility are not clearly clarified, should, for example, a German wreck in Dutch waters pose a danger.

The research findings do not simply disappear in someone’s desk drawer. On the one hand, they are fed into a software with the locations of munition relics in the North and Baltic Sea, which is managed by the Kiel company EGEOS. The software is useful for the authorities and economy for risk assessment purposes. On the other hand, there’s also a touring exhibition that is being organized by DSM. The exhibition will tell the story of MAINZ’s demise and that of other vessels, as well as the fate of crews and the relics.

--- “We usually move within the borders of our specialist circles. Crossing these borders with this exhibition is cool.” ---

The exhibition will be able to be seen in several European cities and will subsequently be integrated into DSM’s permanent exhibition. A further incentive for the researchers is that a broad audience will get to see their work and be made aware of the topic. “We usually move within the borders of our specialist circles,” says Matthias Brenner. “Crossing these borders with this exhibition is cool.”

The University of Bremen and twelve non-university research institutes financed by the federal government cooperate within the U Bremen Research Alliance [https://www.uni-bremen.de/en/research-alliance].

Twice per year, the Impact science magazine provides an exciting insight into the effects of cooperative research in Bremen. "Time Bombs at the Bottom of the Ocean" was published in issue 3 (Jan. 2021).

<
Where are the wrecks located? Scientists peruse archive documents regarding the progression of battl ...
Jens Lehmkühler
Jens Lehmkühler / U Bremen Research Alliance

Where are the wrecks located? Scientists peruse archive documents regarding the progression of battles. 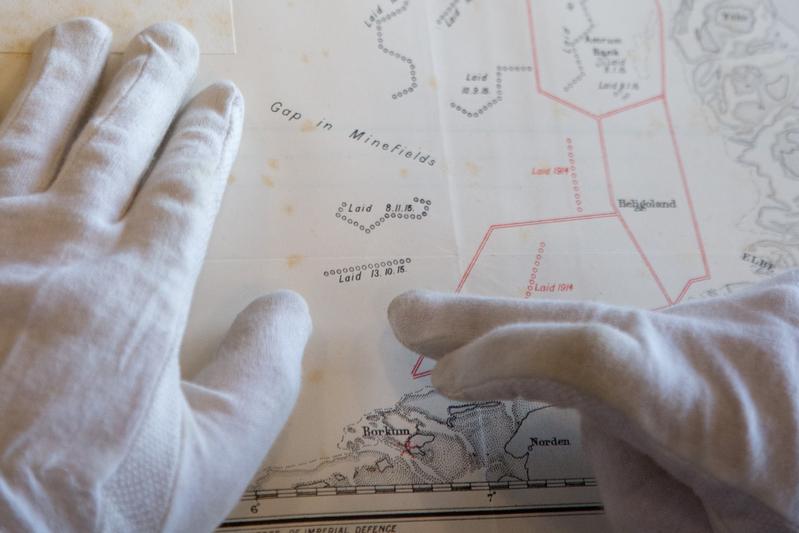