A new research paper on the pollen wasp genus Quartinia by scientists from the NHM Vienna in cooperation with the Natural History Museum Stuttgart describes the ability of females to produce a silky excretion, which serves as a bonding agent stabilizing the nest walls when nesting in loose sand. This key innovation that allowed them to colonize sand habitats as a new ecological zone for pollen wasps. Quartinia species are found primarily around the Mediterranean Sea and in southern Africa.

Pollen wasps are a subfamily of vespid wasps with about 300 described species. Like bees, all representatives of these solitary wasps provision their larvae with pollen. Most pollen wasp species dig their nests in firm, clayey soils or use clay to build aboveground free brood cells, e.g., on stones. In contrast, the representatives of the genus Quartinia, which occurs mainly in the Mediterranean region and southern Africa, build their nests in loose sand. The females stabilize the walls by fixing the sand grains inside with silky fibers.
While silk production is quite common in larvae, it is rare in adult insects. Previously, it was known that silk threads are applied with the mouth region during nest construction. Comparative morphological studies were conducted to identify the specific structures associated with this behavior.
"We compared the heads of females of various species from this genus with those of males and other pollen wasps. This way we were able to identify a previously unknown gland in the mouthparts of the females that is most likely involved in the production of the silk. We also discovered a very unusual process at the tip of the maxillae, which is assumed to serve the application of the threads. Representatives of other genera as well as males lack these structures," explains Dr. Dominique Zimmermann, curator of the Hymenoptera Collection at NHM Vienna.
How can you study the mouthparts of a wasp with a body size of 4 mm?
"We systematically scanned the surfaces with a scanning electron microscope," says Zimmermann. "To be able to investigate the tissues with the light microscope, the heads were first embedded in resin and then series of thin sections were made with a diamond knife in an ultramicrotome." The studies were supplemented by the use of a micro-computed tomograph. "It's actually incredible that it is now possible to examine glands in the mouthparts of such a tiny wasp with a micro-CT in 3D," says co-author Volker Mauss, Citizen Scientist and volunteer at the Stuttgart Museum of Natural History, enthusiastically about the high-end method used in the study.
The newly discovered structures are so-called key adaptations of the genus Quartinia that enabled it to inhabit sand habitats, and thus a completely new ecological zone for pollen wasps. Although all pollen wasps occur in dry areas, they are generally bound to hard clayey soils there and need at least temporary but dependable water resources, as they soften the hard soil with water for digging when building nests. Only the species of the genus Quartinia are found in sandy deserts, semi-deserts or even coastal dunes, where they can be quite abundant and are also important pollinators of desert plants. The stabilization of the nest wall is of outstanding importance for the colonization of these sandy areas. In addition to the ability to produce silk in females, all representatives of the genus have other adaptations to the harsh conditions of deserts: they can fly under extreme conditions such as high temperatures or strong winds, and their small body size of only 2 to 7 mm enables them to reproduce with the limited resources available in desert habitats. Not only is water not required for nest building, but the wasp's own water needs are met directly from the nectar of flowering plants.
With over 140 known species, Quartinia is the most species-rich genus within the pollen wasps. The ability of Quartinia females to stabilize the walls of their nests in loose sand through the use of self-produced silk as a bonding agent is a key innovation that may have greatly facilitated the species diversification of the genus. The chemical composition of the silk threads produced by Quartinia females is still unknown.

<
Female of the pollen wasp species Quartinia canariensis during nest construction. The wasps are only ...
© Volker Mauss
© Volker Mauss

Female of the pollen wasp species Quartinia canariensis during nest construction. The wasps are only about 4 mm in size, so the supposed "pebbles" are actually grains of sand. 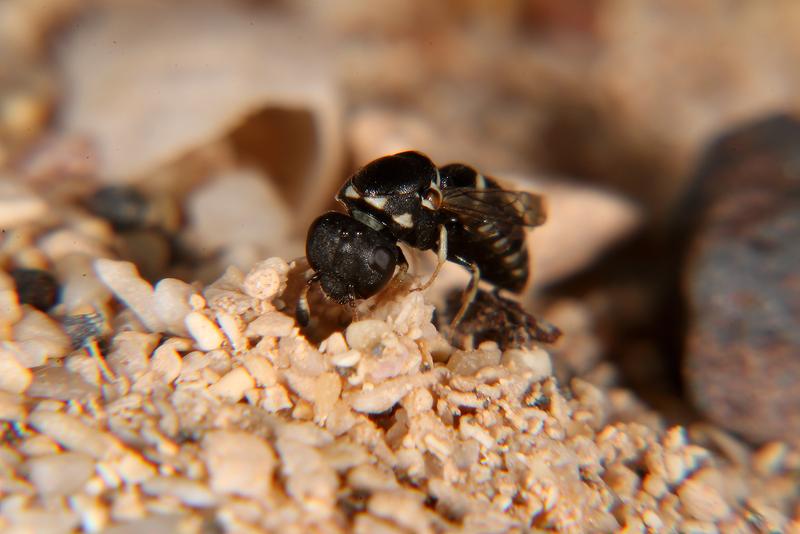 Quartinia canariensis while visiting a flower 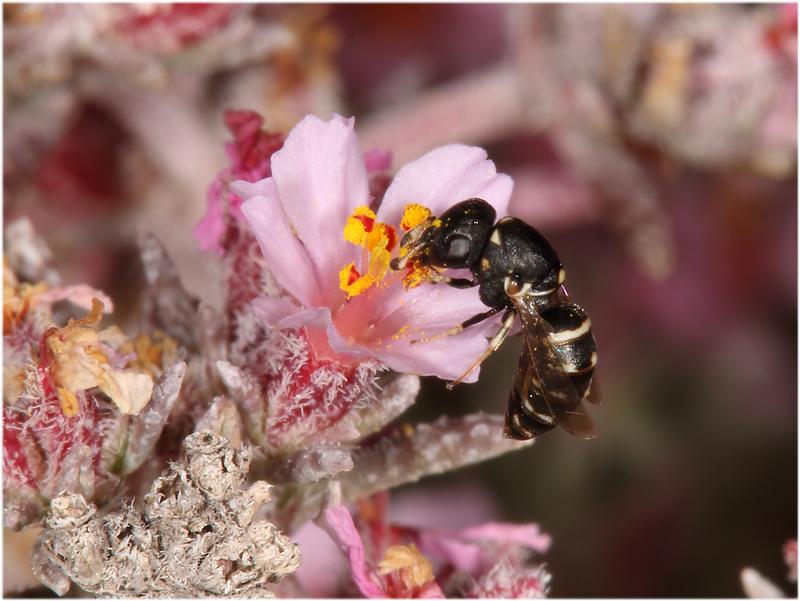