Compared to most other primates, humans are characterized by a tight fit between the maternal birth canal and the fetal head, leading to a relatively high risk of neonatal and maternal mortality and morbidity. Why the human birth canal has not evolved to be larger and reduce these risks has long been a topic of debate. A new study, published in PNAS and co-led by Dr. Nicole Grunstra, affiliated scientist in the Mammal Collection at the Natural History Museum of Vienna, highlights the role of the pelvic floor in constraining human pelvic evolution.

The relatively small human birth canal is the result of an evolutionary trade-off between multiple, at least partly opposing selective forces. Birth-related (“obstetric”) selection is thought to favor a spacious birth canal, whereas the opposing selection favoring a smaller pelvic canal has traditionally been assumed to be our bipedal locomotion. Another explanation, known as the “pelvic floor hypothesis”, proposes that a larger birth canal undermines the support function of the muscles of the pelvic floor: to contribute to continence and help support the inner organs and the fetus during pregnancy. The larger the bony pelvis, the larger the area across which the pelvic floor muscles are suspended and, as a result, the larger their downward bending, which is disadvantageous for the pelvic floor’s support function. Pelvic floor disorders such as pelvic organ prolapse and various types of incontinence are relatively common among women. Apart from clinical studies seeking to identify risk factors for pelvic floor disorders, the pelvic floor hypothesis remains under-investigated in the context of human pelvic evolution.
To test this hypothesis, Grunstra and her colleagues from the University of Vienna and the University of Texas at Austin (USA) used a Finite Element approach in which they simulated human pelvic floors across a range of different sizes, keeping all else constant. Then they measured pelvic floor deflection, i.e. the amount of bending from the original position. “Using this approach, rather than using clinical data from living people, allowed us to isolate the effect of bony pelvis geometry on pelvic floor deflection, without having to worry about the role of other factors,” said Grunstra. These other factors include non-pelvic variables such as age, number of vaginal births, and fetal head size, among others, which are all known risk factors of pelvic floor disorders.
As expected under the pelvic floor hypothesis, deflection grew disproportionately fast with increasing surface area. The researchers were thus able to provide compelling evidence in favor of the notion that the human bony pelvis encompasses a functional trade-off between childbirth and pelvic floor support.
The team also investigated the potential compensatory effect of added thickness. Indeed, an increase in thickness reduced deflection because thicker pelvic floors had higher stiffness, i.e. they were more resistant to bending and stretching. Interestingly however, thickness was only able to partially compensate as long as it changed in proportion to the diameter of the pelvic floor, because larger and thicker pelvic floors nonetheless deflected relatively more than smaller and thinner pelvic floors. “This means that a full compensatory effect of thickness is only possible if larger pelvic floors were also disproportionately thick,” explains Grunstra.
So why did the human birth canal not evolve to be larger, creating more room for the fetus during birth, and the pelvic floor to simply be a lot thicker so as to still offer sufficient support of the fetus, inner organs, and continence? During childbirth, very high intra-abdominal pressures are needed to stretch the pelvic floor muscles enough for the fetus to be able to pass through. For thicker – and therefore stiffer – pelvic floors these pressures need to be even higher, and women may simply not be able to generate them through uterine contractions and voluntary pushes. “A thick pelvic floor may be great for supporting inner organs and a heavy fetus, but eventually the baby needs to come out and a pelvic floor that is too stiff and too difficult to stretch out would really complicate childbirth, even if there was enough space inside the birth canal” explains Grunstra. The researchers thus think they have identified another, hitherto-unknown functional trade-off in the human pelvis. 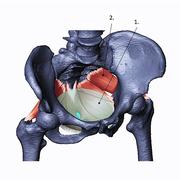 A human pelvis and muscles of the pelvic floor, which span the bony pelvic canal. The model (“1”) used in the analysis is shown superimposed on the pelvic floor muscles (“2”). (Author: Theresia Steinkellner, Copyright: Katya Stansfield.) 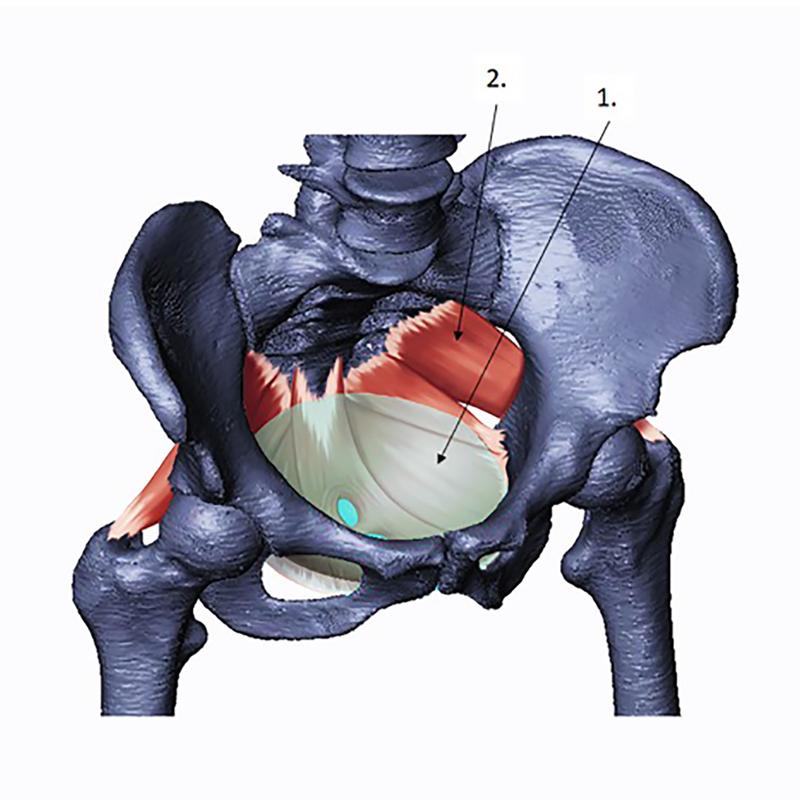