Paradigm change in cell biology? Protein transport from ER to Golgi apparatus not via COPII-coated vesicles

One third of the proteins essential for life processes are produced in the endoplasmic reticulum (ER) of the cell and distributed via membrane vesicles. Sorting of proteins at ER exit sites and transport to the Golgi apparatus is orchestrated by the so-called COPII protein coat complexes, but not as previously thought. Researchers at Tel Aviv University, Israel, and the Leibniz Institute on Aging - Fritz Lipmann Institute, Germany, have now found that the COPII complexes do not leave the ER for transport. They remain as gatekeepers at ER exit sites from where they control the protein recruitment, sorting and exit to the Golgi. The new findings could lead to a paradigm shift in cell biology.

Jena/Tel Aviv. Just as countless letters or packages containing goods are sent in daily life, there are similar transport processes in every cell of our body. Every day, newly synthesized proteins, the "cargo," must be conveyed to their final destination with a high degree of reliability. Behind the scenes, this transport requires extensive logistics, because it is the only way that proteins can be selectively passed from station to station to be transported from their site of synthesis to other locations within the cell or out of the cell to several locations in the body.

One-third of all newly synthesized proteins in cells are routed via the so-called secretory pathway. This pathway is comprised of the endoplasmic reticulum (ER), the “factory”, and the Golgi apparatus, the main “logistics center” for further distribution of the goods in the cell. But how do the goods get from the factory to the logistics center, i.e. from the ER to the Golgi apparatus?

In cell biology, the prevalent view how cargo is transported from the ER to the Golgi is that small membrane-vesicles are loaded with the proteins to be transported and bud off the ER. They fuse to larger transport containers which are then transported along “railroad tracks”, the microtubules, to the Golgi. At the Golgi they fuse with membrane and release their cargo for further distribution. Important to this process is a special protein coat, the COPII complex, that helps in concentrating the cargo at the ER and budding off the small vesicles that are consequently called COPII-coated vesicles (transport vesicles; coat protein complex II). But this knowledge now needs to be revised.

Israeli researchers led by Prof. Koret Hirschberg of Tel Aviv University (TAU) and German researchers led by Dr. Christoph Kaether of the Leibniz Institute on Aging - Fritz Lipmann Institute (FLI) in Jena, Germany, now suggest a different model for protein transport in the cell and the role of COPII in a study published in the Journal of Cell Biology.

"It was tough to get this paper published," says Prof. Hirschberg, "because it is against the dominating dogma in the field, the vesicle transport hypothesis. This study was possible only because of the extensive long term collaboration of the FLI and TAU teams."

Using high-end live-cell imaging combined with electron microscopy, the research team gained insights into living mammalian cells and was able to confirm through complementary biochemical analyses that the COPII components play an important role in the transport process of proteins. But not in the way that text books used to convey. Contrary to the prevalent view that COPII-enveloped vesicles transport proteins, COPII complexes do not leave the endoplasmic reticulum. They remain permanently at the exit sites of the ER, where their task is the recruitment, sorting, and exit of proteins from the ER.

COPII complexes are stable and immobile

Thus, proteins do not exit the ER in COPII-enveloped vesicles, as previously postulated, but in larger, often elongated COPII-free transport units. "Instead of budding off and enveloping vesicles, COPII acts like a gatekeeper right at the boundary between ER and ERES, the exit sites of the ER, where it controls and regulates the concentration of cargo," Dr. Kaether says.

At the same time a similar paper in Cell (https://doi.org/10.1016/j.cell.2021.03.035) by Jennifer Lippincott-Schwartz, a renowned membrane transport expert from the Howard Hughes Medical Institute, USA, came to identical conclusions using a set of different methods, strongly supporting the data from the FLI/TAU collaboration.

"Both papers change our current view on one of the most fundamental processes in cell biology, the export from the ER," declares Dr. Kaether, highlighting the findings. "Because this is such an essential pathway for the cell, it is not surprising that it plays an important role in the aging process and in many diseases - from common diseases such as cancer to neurological disorders and rare inherited diseases," adds Dr. Kaether, the co-corresponding author from FLI.

The data presented here lay the foundation for an alternative model, on the role of the COPII complex in export from the ER. A more detailed understanding of the underlying mechanisms of protein transport will help to better understand disease mechanisms and provide the basis for novel therapeutic approaches.

<
Schematic of the previous (I.) and the new model (II.) of transport processes at the endoplasmic ret ...

<
Schematic of the previous (I.) and the new model (II.) of transport processes at the endoplasmic ret ...

Schematic of the previous (I.) and the new model (II.) of transport processes at the endoplasmic reticulum (ER). Left: COPII-coated transport vesicles leaving the ER. Right: COPII helps to sort and package protein cargo in a stationary manner. 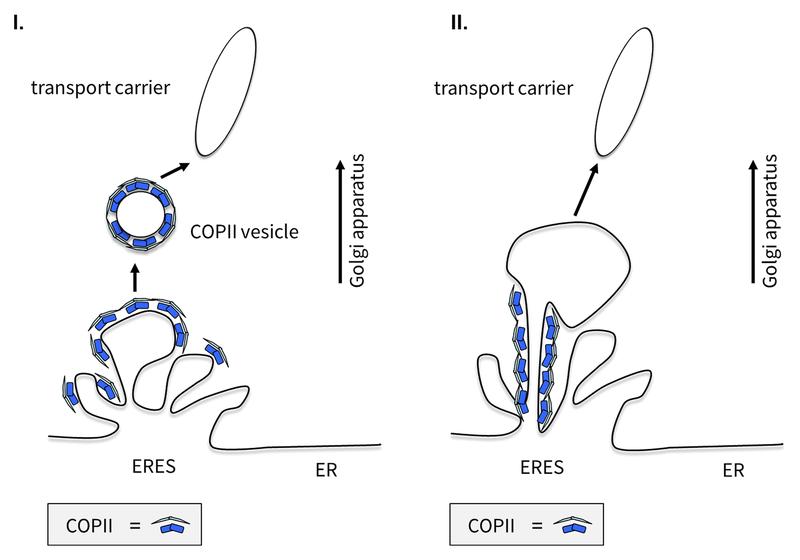