Is Climate Sensitivity Higher Than Believed?

An international meta-study with participation of environmental physicist Prof. Dr Werner Aeschbach of Heidelberg University suggests that the last Ice Age about 20,000 years ago may have been colder than previous reconstructions of the period’s global temperature have led us to believe. It compiles the results of over 30 individual studies. The resulting cold ice-age temperatures point to higher climate sensitivity, which could mean that global warming could end up stronger than previously assumed.

The last Ice Age about 20,000 years ago may have been colder than previous reconstructions of the period’s global temperature have led us to believe. An international meta-study to which Prof. Dr Werner Aeschbach of the Institute of Environmental Physics at Heidelberg University contributed suggests this may have been the case. The meta-study compiles the results of over 30 individual studies. The resulting cold ice-age temperatures point to higher climate sensitivity. In climate science, this is a main measurement to calculate the average global warming in response to a doubling of atmospheric carbon dioxide and is therefore an indicator for the severity of climate change. According to Prof. Aeschbach, a higher sensitivity would mean that global warming could end up stronger than previously assumed.

Climate sensitivity depends on the interaction of a number of feedbacks, making it difficult to pinpoint with any precision. The Intergovernmental Panel on Climate Change (IPCC) estimates climate sensitivity at about three degrees Celsius with a margin of uncertainty between two and 4.5 degrees. Prof. Aeschbach explains that one way to determine climate sensitivity is to reconstruct the global temperature of the so-called Last Glacial Maximum (LGM). The LGM refers to the period about 20,000 years ago in which the ice sheets were at their greatest extent. The temperature difference between the Last Glacial Maximum and the current warm period, which has lasted nearly 10,000 years, supports conclusions about climate sensitivity.

The noble gas method is one particularly reliable way to reconstruct the temperature of past epochs. Unlike other approaches, this land-based paleothermometer can determine the temperatures that prevailed on the continents. To do this, concentrations of noble gases in ancient ground water remaining in the world’s large sedimentary basins are measured. “The solubility of noble gases in water depends on temperature, and this relationship is precisely known,” explains Prof. Aeschbach, head of the Hydrospheric Tracers and Proxies working group at the Institute of Environmental Physics at Heidelberg University. “By measuring the concentrations of noble gases in these ground water reservoirs, we can determine the temperature that prevailed at the time of infiltration.”

Based on the methodological contributions of the Heidelberg environmental physicist, for the first time the results of over 30 individual studies have been compiled in a large-scale meta-study. At the same time, the researchers systematically re-evaluated older studies using current standards and recalculated the noble gas temperatures. “One of the most critical insights of our meta-study is that the temperature difference between the LGM and the current warm period is astonishingly high,” states Prof. Aeschbach, who was involved in carrying out several of these studies. The re-analysis of the data for the low and medium latitudes yielded an average cooling during the Ice Age of about 5.8 degrees Celsius – a value that conflicts with the conventional reconstructions of the tropical sea surface temperatures.

“This value alone is not significant enough to draw conclusions about the global temperature during the last Ice Age,” adds Prof. Aeschbach. “But when viewed in the context of current studies based on oceanic data, our results suggest a considerably colder world during the Last Glacial Maximum. In turn, this means that climate sensitivity may be higher than previously thought.” The seven researchers who took part in the meta-study assume that the actual value could be about 3.5 degrees Celsius. In view of climate change in today’s world, that could mean that the earth could grow hotter than previous climate models have predicted.

In addition to Prof. Aeschbach, researchers from the Woods Hole Oceanographic Institution in Massachusetts (USA), the Scripps Institution of Oceanography of the University of California in San Diego, the Lamont-Doherty Earth Observatory of Columbia University in New York, and the Swiss Federal Institute of Aquatic Science and Technology (Eawag) contributed to the meta-study. The results were published in the journal “Nature”.

<
Groundwater well in the Cambay Basin in Gujarat (India). By measuring the concentrations of noble ga ...

Groundwater well in the Cambay Basin in Gujarat (India). By measuring the concentrations of noble gases in ancient groundwater pumped at wells such as these the temperature at the time of infiltration can be determined. 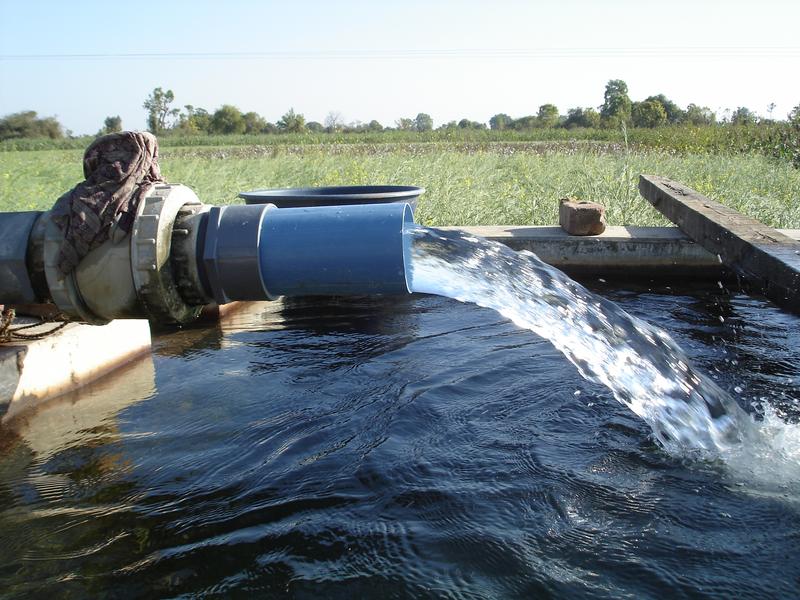