Scientists observe a new kind of light emission when electrons in topological insulators abruptly reverse their direction of motion. The new findings are reported in the upcoming issue of “Nature”.

To change the direction of motion of a massive object, such as a car, it has to be slowed down and brought to a complete standstill first. Even the tiniest charge carriers in the universe, the electrons, follow this rule. For future ultrafast electronic components, however, it would be helpful to circumvent the electron’s inertia. Photons, the quanta of light, show how this could work. Photons do not carry mass and can thus move at the highest possible velocity, the speed of light. For a change of direction, they do not need to slow down; when they are reflected from a mirror, for instance, they abruptly change their direction without a stopover. Such behavior is highly desirable for future electronics because the direction of currents could be switched infinitely swiftly and the clock rate of processors could be massively increased. Yet, photons do not carry electric charge, which is a prerequisite for electronic devices.

An international consortium of physicists from the University of Regensburg, the University of Marburg, and the Russian Academy of Sciences in Novosibirsk succeeded in flipping the motion of electrons on ultrafast time scales without slowing them down. In their study, they employed the new material class of topological insulators. On their surfaces, electrons behave like massless particles moving almost like light. To switch the direction of motion of those electrons as rapidly as possible, the researchers accelerated electrons with the oscillating carrier field of light – the fastest alternating field in nature controllable by mankind.

When the electrons abruptly reverse their direction of motion, they emit an ultrashort flash of light containing a broadband spectrum of colors like in a rainbow. There are strict rules on which colors get emitted: Generally, when electrons are accelerated by lightwaves only radiation is emitted, whose oscillation frequency is an integer multiple of the incident light’s frequency, so-called high-order harmonic radiation. “By carefully adjusting the accelerating light field, we were able to break this rule. We managed to control the electrons’ motion such that light of every imaginable color could be generated,” explains Christoph Schmid, first author of the study.

In a careful analysis of the emitted radiation, the scientists found further unusual quantum properties of the electrons. It became apparent that the electrons on the surface of a topological insulator do not move in straight lines following the electric field of light but rather perform meandering trajectories through the solid. “Even for a theoretician, it is highly fascinating to see which phenomena quantum mechanics can produce if you only look a little closer,” elucidates Dr. Jan Wilhelm, who successfully explained the experimental findings with a simulation he developed together with his colleagues in the Institute of Theoretical Physics at the University of Regensburg.

“These results do not only provide intriguing insights into the microscopic quantum nature of electrons; they also suggest topological insulators as a promising material class for future electronics and information processing,” summarizes Prof. Dr. Rupert Huber, who led the experimental work in Regensburg. Such expectations perfectly follow the mission statement of the Collaborative Research Center SFB 1277, funded by the German Science Foundation. Within this network, experimental and theoretical physicists explore novel relativistic effects in condensed matter and test possibilities to implement their findings in future high-tech applications.

<
Scientists observe a new kind of light emission when electrons in topological insulators abruptly re ...

Scientists observe a new kind of light emission when electrons in topological insulators abruptly reverse their direction of motion. 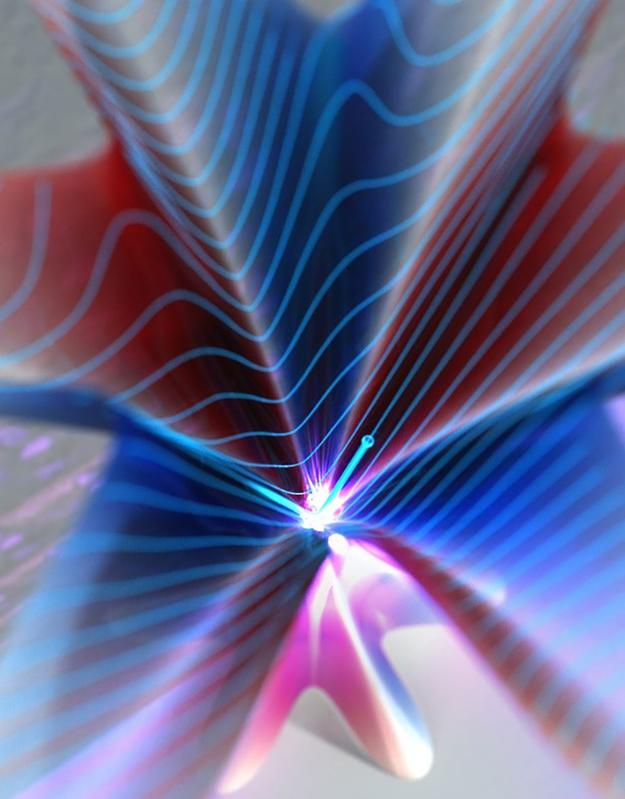