Range of the Annamite striped rabbit in Vietnam is much larger than previously known, wildlife camera surveys reveal

The Annamite striped rabbit (Nesolagus timminsi) is an endemic lagomorph inhabiting wet evergreen forests in Vietnam and Laos. The nocturnal and solitary ground-dwellers were discovered by science only in the 1990s, and fundamental knowledge gaps about its ecology and distribution remain. Scientists from Leibniz Institute for Zoo and Wildlife Research (Leibniz-IZW) in Germany and Southern Institute of Ecology (SIE) in Vietnam now report first records of Annamite striped rabbits in Bidoup-Nui Ba National Park in the southern Annamite Mountains of Vietnam. This is a tremendous extension of their previously known range, which covered the area from the northern to the central Annamites.

As the Annamite striped rabbit is listed as Endangered on The IUCN Red List of Threatened Species, new populations are of conservation value and warrant the highest level of protection. The record is described in detail in the scientific journal “Mammalia”.

From September 2019 until October 2020, scientists from Leibniz-IZW and SIE conducted systematic wildlife camera surveys in Bidoup-Nui Ba National Park in collaboration with experts from the National Park and the NGO Global Wildlife Conservation (GWC). They set up 103 cameras in a grid-based survey design approximately 30 to 40 centimetres off the ground in different habitat types in the park. The cameras were active a total of 13,632 nights and photographed Annamite striped rabbits 20 times at three different stations. All of these 20 photographs were taken at night, at elevations between approximately 1,500 and 1,900 meters and in broadleaf wet evergreen forest with a multi-tiered closed canopy, and dense, moist understorey vegetation. “The photographs represent the first evidence of the species in the southern Annamites ecoregion, approximately 300 km south of the southernmost part of the range map shown on The IUCN Red List of Threatened Species, and almost 400 km south of the most recently traced camera-trap records from Quang Nam province”, say An Ngyuen and Dr Andrew Tilker from Leibniz-IZW. “The records also represent the highest-elevation records documented for the species.”

The new data on the species also reveal how much knowledge is still missing about the newly discovered population, its habitat use in the Annamite Mountains and its biology and distribution in general. “It is interesting to note that the cameras only recorded very few of the rust-coloured lagomorphs with characteristic stripes in the vast and relatively well-protected National Park”, says Duy Le from SIE. “Indiscriminate snaring – the primary threat to the species – is assumed to be lower than in the central or northern Annamites. The low abundance therefore needs to be confirmed, explained or refuted through additional surveys and analyses in Bidoup-Nui Ba and adjacent or nearby regions.” Another research priority is to assess the degree of genetic distinctiveness among known Annamite striped rabbit populations in the southern, central and northern Annamites. The Dalat Plateau area of the southern Annamites, where Bidoup-Nui Ba National Park is situated, is separated from the moist evergreen forests of central Vietnam by a stretch of dry forest habitat. If the Annamite striped rabbit is a true wet evergreen forest specialist, as all information currently suggests, isolated populations in southern, central and northern parts of the mountain range are likely.

“The discovery of this new population is important for the conservation of this highly threatened species”, says Dr. Le Van Huong, the Director of Bidoup Nui Ba National Park. “As a next step we will conduct extensive surveys with our partners to investigate the conservation status of the Annamite striped rabbit and which ecological factors are responsible for the occurrence of this species. We are concerned that the decline of population will lead to local extinction of this only known population of Annamite striped rabbits in the southern Annamites. We also look forward to implementing conservation actions to protect this endemic species, as part of our efforts to protect the wider biodiversity that makes Bidoup-Nui Ba National Park so special.” 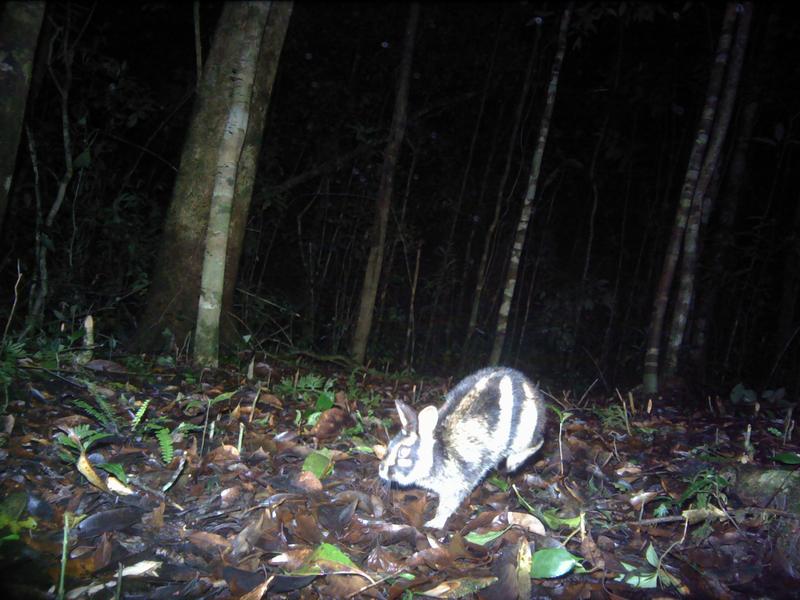