Development of the World's First Digital Model of a Cancer Cell

The computer model, developed under the lead management of researchers at TU Graz, simulates the cyclical changes in the membrane potential of a cancer cell using the example of human lung adenocarcinoma and opens up completely new avenues in cancer research.

Computer models have been standard tools in basic biomedical research for many years. However, around 70 years after the first publication of an ion current model of a nerve cell by Hodgkin & Huxley in 1952, researchers at Graz University of Technology (TU Graz), in collaboration with the Medical University of Graz and the Memorial Sloan Kettering Cancer Center in New York, have finally succeeded in developing the world's first cancer cell model, thus launching "an essential tool for modern cancer research and drug development," reports a delighted Christian Baumgartner. The head of the Institute of Health Care Engineering with European Testing Center of Medical Devices at TU Graz is senior author of the publication in which the digital model is presented in the journal PLoS Computational Biology.

Digital cell models have so far focused on excitable cells such as nerve or cardiac muscle cells, allowing the simulation of electrophysiological processes not only at the cellular level, but also at the tissue and organ level. These models are already being used to support diagnosis and therapy in everyday clinical practice. The international research team led by Baumgartner focused on the specific electrophysiological properties of non-excitable cancer cells for the first time.

In excitable cells, an electrical stimulus triggers so-called action potentials. This leads to short-term changes in electrical potential lasting milliseconds at the cell membrane that transmit "electrical" information from cell to cell. Through this mechanism, neural networks communicate or the heart muscle is activated, which contracts as a result. It is known from experimental studies that "non-excitable" cells also exhibit characteristic fluctuations of potential at the cell membrane. However, compared to excitable cells, the potential changes occur very slowly and over the entire cell cycle, i.e. over hours and days, and serve as a signal for the transition between the individual cell cycle phases," explains Christian Baumgartner. Together with the deputy head of the institute, Theresa Rienmüller, and PhD student Sonja Langthaler, Christian Baumgartner was the first to pursue the idea of developing a simulation model of these mechanisms.

Pathological changes in cell membrane voltage, particularly during the cell cycle, are fundamental to cancer development and progression. Sonja Langthaler continues in detail: "Ion channels connect the outside to the inside of a cell. They enable the exchange of ions such as potassium, calcium or sodium and thereby regulate the membrane potential. Changes in the composition of ion channels, as well as altered functional behaviour of the same, can result in disruptions in cell division, possibly even affecting cell differentiation and thus transforming a healthy cell into a diseased (carcinogenic) cell."

For their digital cancer cell model, the team chose the example of the human lung adenocarcinoma cell line A549. The computer model simulates the rhythmic oscillation of the membrane potential during the transition between cell cycle phases and enables prediction of the changes in membrane potential that are caused by drug-induced switching on and off of selected ion channels. "So we get information about the effects of targeted interventions on the cancer cell," Baumgartner adds.

"Freezing" cancer cells during growth or inducing them to commit suicide

The activity of certain ion channels can also drive the division of diseased cells and thus accelerate tumour growth. If ion channels are now manipulated in a targeted manner, as is the case with new, promising agents and drugs, the cell membrane voltage and thus the entire electrophysiological system can be thrown off track, so to speak. "This could be used to arrest cancer cells at a certain phase in the cell cycle, but also to induce premature cell death (apoptosis). One could "freeze" cancer cells while they are growing or induce them to commit suicide. And it is precisely such mechanisms that can be simulated with the help of models." Baumgartner and his team see the first digital cancer cell model as the beginning of more comprehensive research. In order to increase the level of detail of the model, plans for further experimental and measurement validations have been made and submitted to the Austrian Science Fund FWF for funding.

This research is anchored in the Field of Expertise "Human & Biotechnology" (http://www.tugraz.at/go/human-biotechnology), one of five strategic research focuses of TU Graz.

The Institute of Health Care Engineering is home to Austria's only state-accredited testing laboratory for medical devices and is also the only university institute in Europe with such a testing and certification body. Based on international standards and regulations, mainly active medical devices are tested: from blood pressure monitors to ECG devices and pacemakers. For more information, visit http://www.hce.tugraz.at.

A graphical representation of a dividing cancer cell. 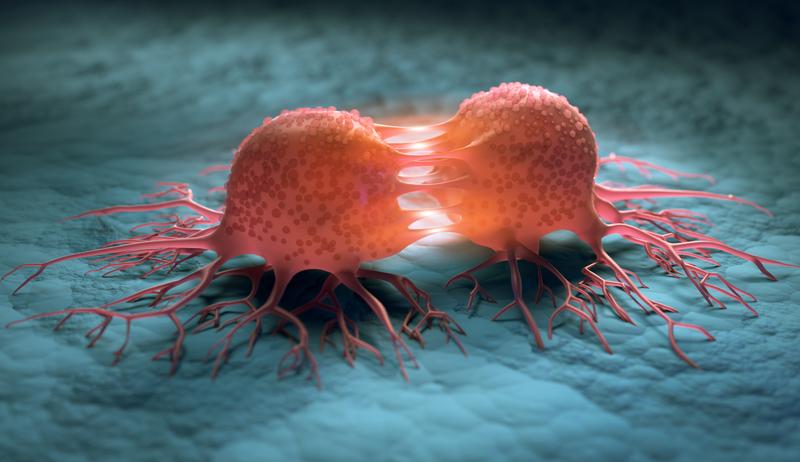 Sonja Langthaler, Christian Baumgartner and Theresa Rienmüller, all from the Institute of Health Care Engineering at TU Graz, were the first to pursue the idea of a simulation model for cancer cells. (from left to right) 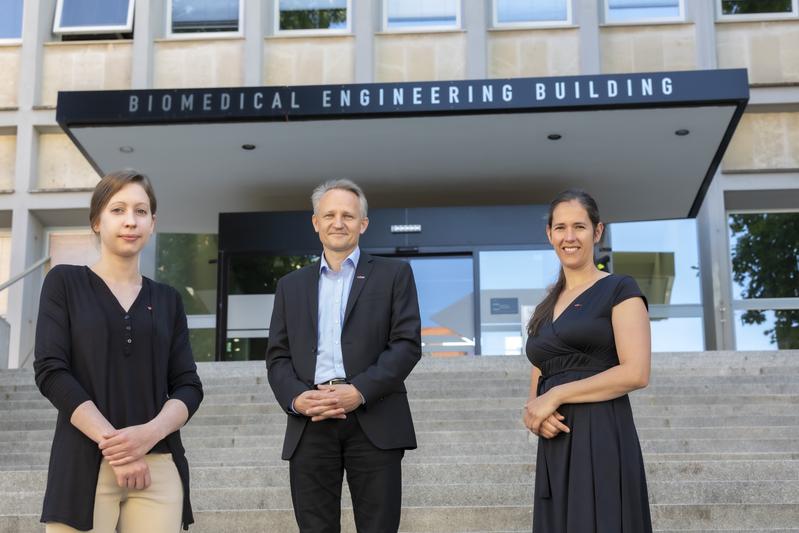