Retail traders often fear that reducing the amount of urban space made available for parking private vehicles would have a negative effect on their businesses. A survey conducted by researchers from the Institute for Advanced Sustainability Studies (IASS) on two shopping streets in Berlin shows that traders have a skewed perception of their customers’ mobility habits. The findings of this research will facilitate better-informed decision-making around urban land-use planning.

The researchers surveyed around 2,000 customers and 145 retailers on Kottbusser Damm (Friedrichshain-Kreuzberg district) and Hermannstraße (Neukölln district). The vast majority of shoppers - 93 per cent - had not travelled to their destination by car. 91 per cent of the revenue generated by these businesses came out of the wallets of customers who walked, cycled or used public transport to reach them. Customers that drive to the shops accounted for just 9 per cent of sales.
Just 7 per cent of customers travel to businesses by car

“The results of this survey confirm the findings of studies published in 2019 on the inner cities of Offenbach, Gera, Erfurt, Weimar and Leipzig. Studies on mobility and local economic impacts conducted in other European countries, North America, and Australia paint a similar picture. The car is less relevant for local business than is often assumed in policy processes. Pedestrians, cyclists, and transit riders are the important customer groups for local business in an urban context." says IASS researcher Dirk von Schneidemesser. Retailers in the cities surveyed overestimated the share of customers who come by car – so too in Berlin, where retailers estimated that 22 per cent of their customers used this mode of transport, when in fact it was only 7 per cent.

This misperception could be due to a human tendency to assume that others behaviour in a similar manner. The survey revealed that traders who drive to their business estimated much higher customer car use (29%) than traders that use other modes of transport (between 10% and 19%). Traders were also found to overestimate the distance that customers travel to visit their businesses. In fact, over half (51%) of the shoppers surveyed lived less than 1 kilometer from the shopping street. In contrast, traders estimated that just 13% of customers live within this range.
Better infrastructure for active mobility can benefit businesses

“The findings of this survey are in line with the growing body of literature that suggests improved active travel (i.e. for pedestrians and cyclists) and transit infrastructure is likely to benefit local business”, says Dirk von Schneidemesser. Business associations should consider this evidence when weighing the benefits and disadvantages of infrastructure development in order to best represent the interests of local business.

Cafés and shops on Kottbusser Damm in Berlin-Kreuzberg: only 7 per cent of customers come by car. 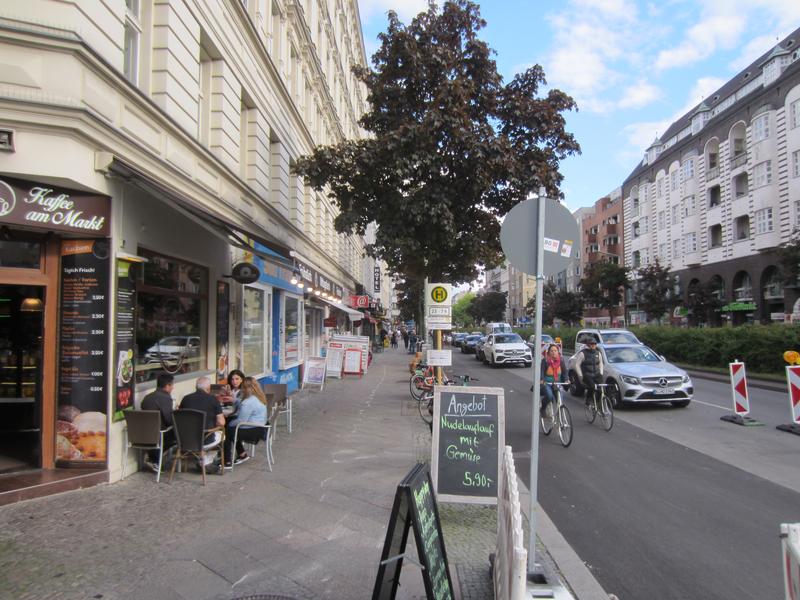