Reflecting on place and space in the face of global movements, national demarcation and borderless communication is the focus of the new research training group "Practicing Place: Sociocultural Practices and Epistemic Configurations" at the Catholic University of Eichstätt-Ingolstadt (KU), which has now officially opened with a kick-off event. Due to the coronavirus pandemic, the ceremony took place in a hybrid format with a limited on-campus audience. The young researchers that come together in the training group, are from India, Mexico, Brazil, Colombia, Great Britain, the USA, France and Spain, among other countries.

The range of participating subjects reaches from literary and cultural studies to sociology, philosophy and geography to art history. The research training group includes ten doctoral candidates, one post-doc, nine lecturers and fourteen associated persons. In addition, there is a broad network of renowned international researchers. This is the first research training group at the KU to be funded by the German Research Foundation (DFG), which will support the concept with around three million euros over four and a half years.

Up to date, questions relating to place and localization have primarily been approached in isolated contexts within the individual disciplines, and using the methods that are usually applied in this discipline alone. However, it is precisely the indistinct blend of social, political, artistic and literary aspects that requires an interdisciplinary approach. As speaker of the group, Prof. Dr. Kerstin Schmidt emphasized that the researchers didn’t want to approach places as unchanging monoliths, but rather ask about the practices that dynamically produce and define places. How does virtual reality (e.g. in a computer game) affect one's sense of place? What effects does globalization have on the experience of places? How are public places reinterpreted or called into question by demonstrations? The work of the research group aims at advancing theory building in a creative and interdisciplinary exchange, thus actively engaging young scholars in academic work and collaborative research.

“We are very proud of the fact that the applicants of the training group were able to convince the DFG with this groundbreaking concept! To the KU, this not only offers the possibility to set the scene for new scientific territory. The KU itself also profits from the exchange with young international researchers: It helps us develop the KU further,” says Prof. Dr. Jens Hogreve, vice president for research and young researchers during the opening event.

The keynote speaker, Prof. Dr. Ayşe Çağlar of Vienna University, was enthusiastic about the international and interdisciplinary focus of the research training group. Çağlar was, among other positions, a research group leader at the Max Planck Institute for the Study of Religious and Ethnic Diversity. In her speech, she presented a study on the role of migrants as shapers of cities. To this effect, she had developed and compared ethnographies of three cities struggling to regain their former prestige - Mardin in Turkey, Manchester in the US state of New Hampshire and Halle an der Saale in Germany. In doing so, she challenged the assumption that migrants live on the fringes of society, threaten social cohesion and need to be integrated. On the contrary, Çağlar was able to show the many-layered role of migrants as urban shapers, including their relationships with city officials, urban developers, political leaders, store owners, community organizers, and social justice movements.

Excellent conditions for research on space and place: Funded by the German Research Foundation, the research training group “Practicing Place” has started its work at the KU. 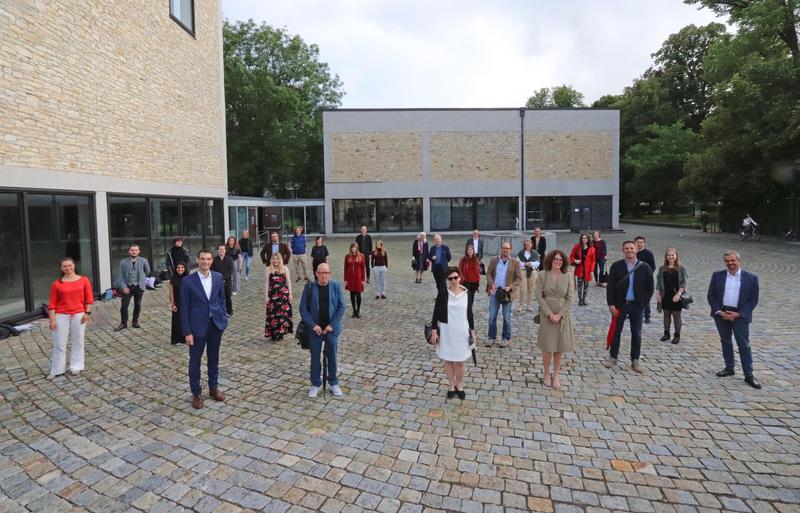