The cichlids of Lake Tanganyika in Africa are highly diverse – including with regard to sex chromosomes. These have changed extremely frequently in the course of the evolution of these fish and, depending on the species, can be of the type XY or ZW. This has been reported by a research team from the University of Basel and the Research Museum Koenig in Bonn in the scientific journal Science Advances.

Based on the biology lessons back in our schooldays, we know that XX means female, and XY means male. In mammals, these constellations of sex chromosomes determine whether an individual becomes a female or a male. It is different in birds, where the principle of ZW = female, ZZ = male applies. In many reptiles, the temperature at which the eggs develop determines the sex. The way in which genetic sex is determined can therefore vary from species to species, with different sex-determining systems having occurred during evolution. In fish, the most biodiverse group of vertebrates, we find different genetic systems (including the XY and ZW types of mammals and birds, respectively) as well as environmental systems (as in many reptiles).

The evolution of sex chromosomes

In mammals, this process took place around 165 million years ago, and resulted in the XY system with a male-specific Y chromosome. In birds, the W is a female-specific chromosome. In fish, on the other hand, it has been known for some time that there is no general sex chromosome system.

With the aid of next-generation genome sequencing methods that allow for a comparison between the genomes of both sexes, a new world of sex chromosomes has been identified in fish: During their evolution, different chromosomes have developed independently of each other in different fish lineages as sex chromosomes. Yet, the repeated appearance of similar or functionally related sex-determining genes suggests that there is a pool of chromosome candidates that are particularly suitable for sex determination.

A research team at the Department of Environmental Sciences at the University of Basel led by Dr. Astrid Böhne (now at the Research Museum Koenig in Bonn) has now investigated the evolution of sex chromosomes in a highly diverse group of fish, the cichlids from Lake Tanganyika in Africa. A particular feature of these fish is that they are a prime example of adaptive radiation, a process in which a large number of species emerge in a relatively short time through rapid adaptation to various habitats.

The researchers analyzed extensive genome and transcriptome data of around 240 cichlid species for differences between females and males, which enabled them to identify sex chromosomes in over 70 species. Interestingly, substantial differences between the species became apparent with regard to the chromosomes responsible for sex determination. The course of the evolution of cichlids in Lake Tanganyika also saw several changes from sex chromosomes of type XY to ZW and vice versa.

«This means that these cichlids hold the record for transitioning between sex chromosomes in vertebrates,» says Astrid Böhne. At the same time, the Basel zoologists found out that certain chromosomes become sex chromosomes particularly often. This supports the hypothesis that there is a group of genes or even whole chromosomes that are particularly suitable for determining genetic sex.

<
In many cichlids in Lake Tanganyika, the difference between females and males is clearly visible ext ...
Adrian Indermaur
Zoology/University of Basel

<
In many cichlids in Lake Tanganyika, the difference between females and males is clearly visible ext ...
Adrian Indermaur
Zoology/University of Basel

In many cichlids in Lake Tanganyika, the difference between females and males is clearly visible externally, as here in Cyathopharynx foae (female left, male right). 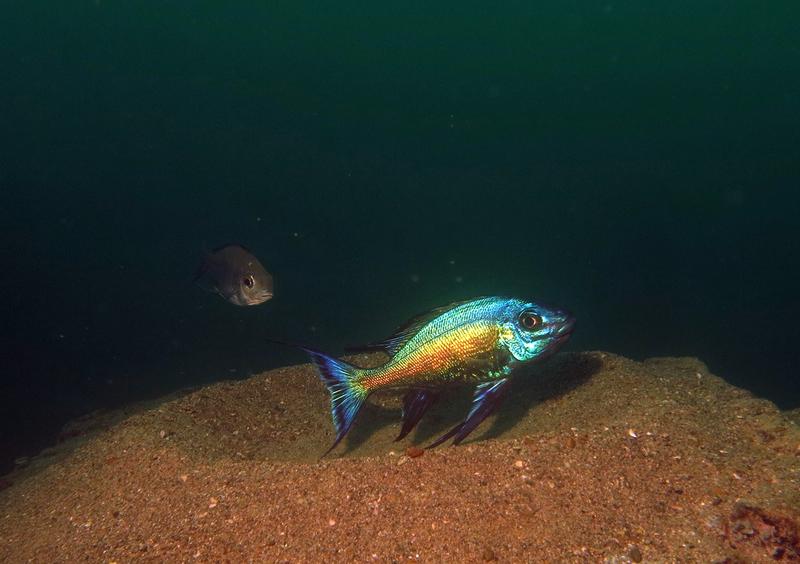