Digitally mapping the history of Jewish settlements in Bavaria

Trying to gain an overview of Jewish history in pre-modern Bavaria, it is easy to lose track of the bigger picture in the seemingly chaotic succession of settling, expulsion and renewed settling. A new digital map, created by researchers of Catholic University Eichstätt-Ingolstadt, now provides us with a systematic insight into the history of Jewish settlements within the borders of modern-day Bavaria.

The collection and processing of the data, unique in this form, is based on the long-term project "Jewish History in Spaces" of the Chair of Early Modern History and Comparative Regional History, which is tapping a large number of new sources in intricate, time-consuming research and is compiling the findings in a database.

To date, information has been gathered on almost 600 settlements that can be shown by records to have existed for a minimum duration of five years in the period between 1500 and 1820. This period was chosen deliberately and documents the phase from the beginnings of rural Jewish life to the revision of Jewish policy in the Kingdom of Bavaria. “The forms that Jewish settlements take, record so much more than mere population density. They also allow us to make statements about the changing Jewish policies of the respective authorities,” says project director Prof. Dr. Sabine Ullmann. The presence of a large number of Jewish communities has left a significant mark on the history of Bavaria. It is important to remember this, especially on the occasion of the anniversary year "321 - 2021: 1700 years of Jewish life in Germany". The project was funded by the "Bavarian History Research Foundation".

The publicly accessible interactive map was created in cooperation with cartographer Claudia Pietsch from the Department of Geography at the KU. It gives the public and experts alike an opportunity to explore connections between Jewish and non-Jewish spaces, while opening up new avenues for further research. At a click on a location, basic information appears, such as the place name, today's county and administrative district, and geographic coordinates. In addition, the map offers more specific information based on the research available to date, for example on protectorates, types of settlements, any expulsions and references to relevant publications. Furthermore, for the first time, Bavaria-wide data from the statistical population survey of the Kingdom of Bavaria from the beginning of the 19th century - the so-called Montgelas survey - was evaluated with regard to the Jewish population and incorporated into the place tables. In addition, the project has included 85 early modern Jewish cemeteries.

Most of the historical documents on Jewish community life were lost if not before then due to National Socialism, which makes research on the settlement history even more difficult. In addition to the existing scientific publications on Jewish communities, the researchers are therefore sifting through the Munich archives of the Imperial Chamber Court files (Reichskammergericht), among others. "In these, we can find new clues to places with Jewish settlements, for example, through information on individuals who were part of court proceedings," explains Oliver Sowa, a research assistant at the professorship. But also disputes about conflicts under sovereign law, such as those depicted in the Vienna Imperial Court records, provide starting points for research. Since the Middle Ages, Jews were able to pay to be placed under the protection of the locally reigning authorities. This principle of protected Jews, the so-called “Judenregal”, was not only a source of income fiercely contested by neighboring territories. Rather, the settlement and taxation of Jews could become a question of political status and be instrumentalized accordingly in disputes over sovereign rights - especially in small-scale territories such as Franconia, Swabia and parts of the Upper Palatinate.

Even a swift glance at the project’s digital map reveals this issue: Most of the settlements are recorded in Franconia and Swabia, while today's Upper and Lower Bavaria have almost no villages with Jewish populations in the period from 1500 to 1820. This is owed to the fact that Duke Albrecht III. expelled the Jews from his duchy of Bavaria-Munich in 1442, and eight years later they were also driven out of the duchy of the Lower Bavarian Duke Ludwig IX. In addition, Jews were also officially forbidden to travel through Bavaria from the 17th century onwards. At the beginning, this policy was accompanied by a change from cities as preferred places of settlement to rural Jewish settlements - a long-term shift that shows on the map.

In addition to settlements, the online portal also lists cemeteries. This makes sense, because the Jewish population was often forced to share cemeteries with other parishes. These territorial cemeteries and the communities or settlements assigned to them formed a Jewish-cultic space that transcended the political boundaries. The map also provides insight into these interlocational connections.

Work on the database and digital map is far from complete. "We are creating a foundation for further research into settlement history. But much more further work is needed to fill in the blanks on individual villages," says Professor Sabine Ullmann. She therefore invites the users to share their own findings with the research team.

Information on the project and the digital map can be found at http://www.ku.de/juedische-geschichte.

Prof. Dr. Sabine Ullmannand her assistant Oliver Sowa are researching the history of Jewish settlements in Bavaria, which they are now making transparent with their publicly accessible digital map. 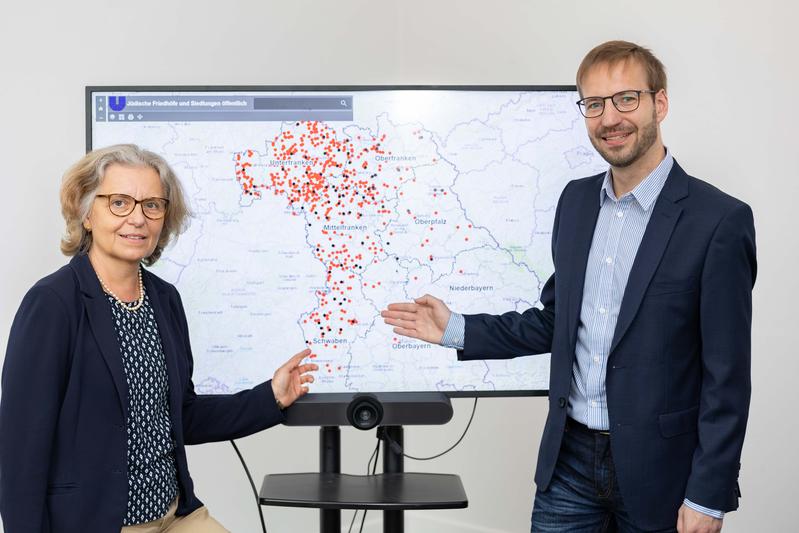