This week the European University Alliance FORTHEM gathered in Mainz, Germany, for its first on-site meeting. Alongside the seven university partners from all over Europe, representatives of the FORTHEM partner cities and their chambers of commerce and industry were invited so that they could meet one another in person and exchange ideas. "We were extremely pleased to have at last been able to greet all the partners of our European University FORTHEM Alliance – and also those partners outside the university domain – here in Mainz. Because of the pandemic, the event had only now become possible. We are thus all the more grateful to have had the opportunity to come together these past few days. We used this chance to welcome two new FORTHEM members while, at the same time, promoting interaction at the city administration and chamber of commerce level," said Professor Georg Krausch, President of Johannes Gutenberg University Mainz (JGU).

FORTHEM, an acronym for "Fostering Outreach within European Regions, Transnational Higher Education and Mobility", is one of 41 university networks funded by the European Commission under the ERASMUS+ program. "In the two years that our FORTHEM Alliance has been active now, the seven partner universities have already made remarkable progress toward becoming a transnational European University," emphasized Professor Stephan Jolie, Vice President for Learning and Teaching at Mainz University. "No other project at our universities has ever brought so many people from across Europe into contact with each other – be it in summer schools, team teaching, online courses, internships, academic speed dating, or in cooperation at the administrative and technical level. We really do have offers for all our university members."

The FORTHEM Alliance set itself ambitious goals: the partners intend to increase the mobility of their students and staff while creating a virtual campus and merging their research programs as well as the double or multiple degree programs of the various universities in a joint Transnational Higher Education Strategy by 2022, which will then be rolled out across the alliance by 2025. In terms of topics, some 500 academics, students, and associated partners are working together in FORTHEM Labs to address future-oriented research fields such as resilience or climate change. "As part of our outreach mission, we work with our cities, schools, and regional businesses. And we also promote student volunteering," added Jolie.

The FORTHEM Alliance has now invited two new members: the University of Agder in Norway and the Lucian Blaga University of Sibiu in Romania. The FORTHEM network has signed a letter of intent with both universities as part of the preparations for their full membership. "We are very much looking forward to getting to know and working with our new partners in northern and southeastern Europe. We are very interested in the new perspective they will bring to our alliance," concluded Jolie.

Networking at the city and chamber of commerce level

The FORTHEM Alliance also contributes to networking at the city administration and chamber of commerce and industry level in the corresponding university cities. The plan is to build an internship network that will span all the FORTHEM locations and provide students with professional skills, to establish various collaborative projects with local schools, and to promote voluntary work in the FORTHEM cities. In addition, the FORTHEM Labs will address socially relevant topics such as climate change, resilience, multilingualism and the integration of migrants into the labor market – critical issues that are currently a matter of debate all over Europe.

"We are thankful that so many representatives of the cities in which our FORTHEM universities are at home accepted our invitation to come to Mainz and that they support our objective of taking the European concept of the FORTHEM Alliance outside the universities and out into local communities, regions, and cities. Only together can we work to create a united Europe – an objective that is crucial in times of growing nationalism and the rise of populist tendencies," emphasized JGU President Professor Georg Krausch. "The exchange we experienced over the last few days – in our workshops as well as during the more informal breaks – has definitely allowed ideas for future collaborations to grow and mature."


About the FORTHEM European University Alliance

FORTHEM is one of now 41 European University Alliances funded by the EU Commission to create a European Higher Education Area by 2025 with learning, studying, and research easily transcending national borders. The idea behind the European Universities Initiative (EUI) goes back to the Initiative for Europe keynote address given by French President Emmanuel Macron on September 26, 2017, at the Sorbonne University in Paris. In that speech he proposed establishing a European University network by 2024.


The FORTHEM network meeting on September 22 and 23, 2021, was funded by the German Federal Ministry of Education and Research (BMBF) and the German Academic Exchange Service (DAAD).


Images:
https://download.uni-mainz.de/presse/FORTHEM_netzwerktreffen_2021_gaeste.jpg
At the 2021 FORTHEM meeting in Mainz, representatives of all partner universities as well as of the university cities' administrations and chambers of industry and commerce came together for exchange.
photo: Peter Pulkowski

https://download.uni-mainz.de/presse/FORTHEM_netzwerktreffen_2021_goldenes_buch....
Following the signing of a joint FORTHEM statement detailing the strategy for the enhancement and development of the European University alliance over the coming years, all guests were invited to sign the Golden Book of Mainz University. In this picture: Eleonora Riva Sanseverino from the University of Palermo and Keijo Hämäläinen from the University of Jyväskylä
photo: Peter Pulkowski

<
At the 2021 FORTHEM meeting in Mainz, representatives of all partner universities as well as of the ...
photo: Peter Pulkowski
© Johannes Gutenberg University Mainz

Representatives of all FORTHEM Alliance universities 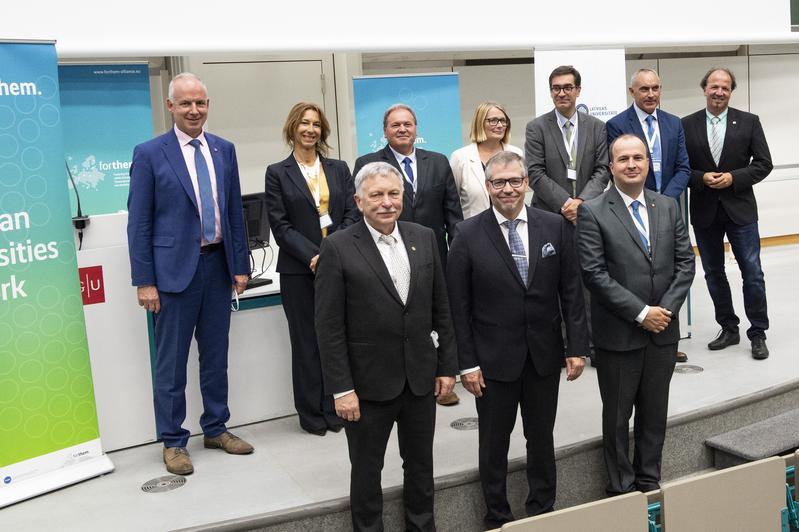 At the 2021 FORTHEM meeting in Mainz, representatives of all partner universities as well as of the university cities' administrations and chambers of industry and commerce came together for exchange. 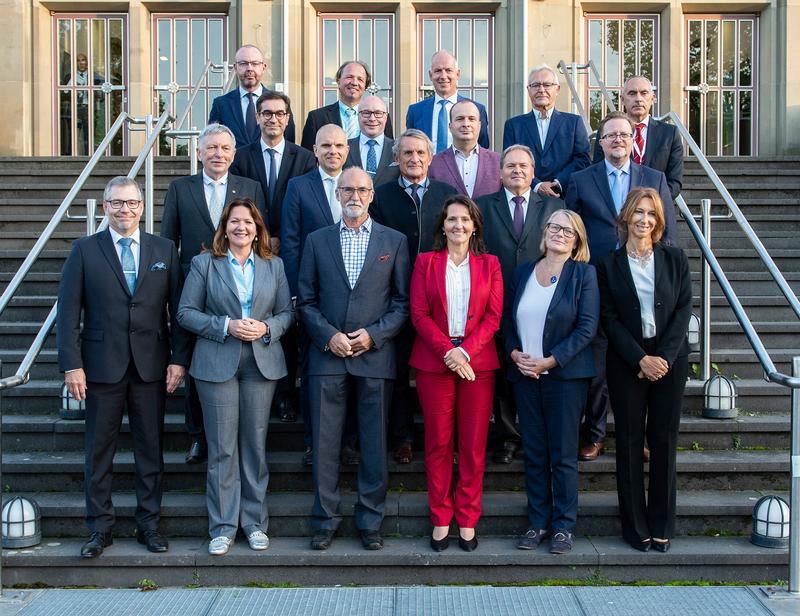