Medicines are often helpful in the treatment of various diseases. In order for them to be effective, researchers need precise information about the surface molecules of viruses or bacteria, for example. Often, the motion of the atoms of these molecules is neglected while developing medicines. But this can have consequences for its effectiveness. A team of researchers is working on software that incorporates such motions. This is helpful, for example, for the development of medication. The team will be presenting their work at the medical technology trade fair Medica held from 15 to 18 November in Düsseldorf at the Rhineland-Palatinate research stand (hall 3, stand E80).

Many years of development work pass before drugs actually enter the market. It is essential that the active ingredient is delivered in the right concentration to the right place in order to unfold its full effect. At the same time there should be few side effects. The chemical structure plays an important role in such substances. Mostly these are long-chain protein molecules. “There is an ever-repeating basic structure, the so-called backbone, which consists of carbon and nitrogen atoms,” explains computer scientist Robin Maack, a doctoral student in Professor Dr Hans Hagen's Computer Graphics and Human Computer Interaction group at Technische Universität Kaiserslautern (TUK). “In this context we need to keep in mind that the atoms are not rigid but move. This could entail strong changes in the shape of the molecule, especially in the case of the backbone.”

For the evolution of molecules, certain constellations can have consequences. In many conventional programmes that represent and visualise proteins, the motion processes of the underlying atoms are disregarded. “The atoms are often considered as fixed spheres in space, although they have a certain space for motion,” Maack explains. “In the process, the motions can cause interactions between the atoms.”

Together with his colleague Dr Christina Gillmann from the University of Leipzig, Maack is currently working on software that calculates this space for motion and displays it together with the original visualisation without covering up existing information. “With the software, users can combine different visualisation methods and color-codings,” Maack continues. “It has a user-friendly design and allows positional uncertainties of the atoms to be represented.”

For this purpose, the computer scientists use data from simulated and real molecules to feed their algorithms. The focus is on observing the atomic motions. “The programme now shows more precisely which positions of a molecule are stable and which are not,” says Maack.

This method is of particular interest for the development of drugs and other active substances. This technology allows them to quickly see whether it makes sense and is even possible to develop and produce the molecule.

The team will be presenting their work at Medica.

Klaus Dosch, Department of Technology and Innovation, is organizing the presentation of the researchers of the TU Kaiserslautern at the fair. He is the contact partner for companies and, among other things, establishes contacts to science.
Contact: Klaus Dosch, E-mail: dosch[at]rti.uni-kl.de, Phone (also during the fair): +49 631 205-3001

The team working on the new software (from left to right): Kurt Schardt, Robin Maack and Christina Gillmann. 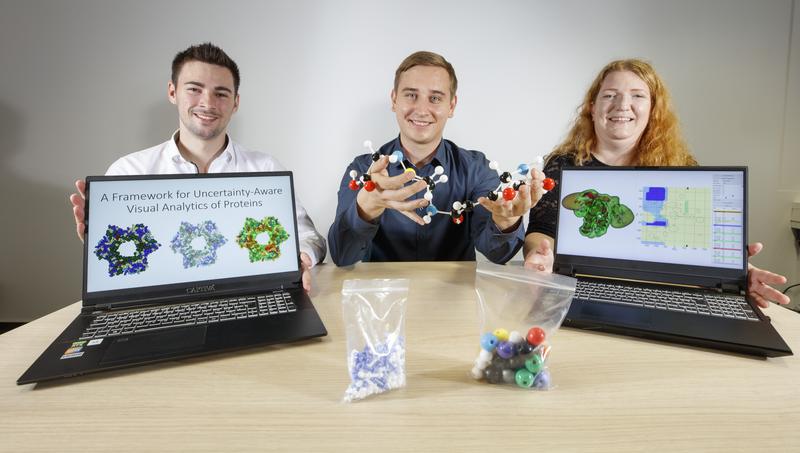