Nature and nurture: researchers identify pathway critical for the development and prevention of intestinal inflammation

Inflammatory bowel diseases (IBD), including Crohn's disease and ulcerative colitis, are chronic inflammatory diseases of unknown origin. While genetics was shown to contribute to IBD risk, only a minority of people carrying genetic risk variants develop the disease. It suggests that other environmental factors play an important role in IBD. Researchers from the Center for Regenerative Therapies Dresden (CRTD) and the Medical Faculty of the TU Dresden have now identified a new pathway responsible for intestinal inflammation. They show how a human genetic defect promotes susceptibility to bacterial triggers of inflammation in the gut.

The researchers report potential for new therapeutics that can prevent IBD in such a genetic setting in mice. The results were published in the journal Science Immunology (DOI: 10.1126/sciimmunol.abf7473). More than 200 distinct genomic regions are known to regulate the risk of IBD. However, the specific pathways and interactions with the environment through which these risk genes promote IBD are still largely unknown. “The interplay of genetics and the environment makes IBD a very complex disease. Also, a particularly challenging one to study,” says Prof. Sebastian Zeissig, research group leader at the Center for Regenerative Therapies Dresden (CRTD) at the TU Dresden and Associate Professor for Molecular Gastroenterology at the University Hospital Carl Gustav Carus Dresden.

A group led by Prof. Zeissig studied mutations in the gene X-linked Inhibitor of Apoptosis Protein (XIAP). About 30 percent of all people with this genetic condition develop IBD, indicating a large genetic contribution to the disease, but also demonstrating that the genetic background is only part of the equation. Prof. Zeissig and his group have studied the XIAP mutation to examine how a crosstalk between this genetic defect and environmental factors promotes IBD.

The researchers observed that loss of XIAP gene in humans and mice is associated with defects in Paneth cells – cells that line the small intestine. “Paneth cells are crucial for controlling the microbiome,” explains Prof. Zeissig. “These cells produce small molecules that act as antibiotics. When secreted into the intestine, these molecules kill bacteria. This way, the composition of the microbiome is kept in check, and bacteria are prevented from entering the intestinal tissue.” Without a functional XIAP gene, Paneth cells could not produce and release antimicrobial molecules to the same extent. This, in turn, led to an imbalance in the microbiome.

Genes load the gun but the environment pulls the trigger

"The fascinating observation was that despite these defects, mice did not develop intestinal inflammation," says Prof. Zeissig. Only after introducing a specific type of bacterium that is harmless to regular mice, mice with defects in XIAP gene developed intestinal inflammation reminiscent of IBD. “This could explain why the majority of patients, who have mutations in this gene, do not develop IBD. The genetic condition gives rise to a susceptible environment. But it is the exposure to specific bacteria that ultimately triggers the inflammation,” explains Prof. Zeissig.

After observing that loss of the XIAP gene led to damage in Paneth cells and imbalance in the microbiome, the researchers decided to test a possible intervention. They re-introduced antimicrobial molecules, similar to those produced by healthy Paneth cells, to mice with the genetic defect. The molecules were able to prevent intestinal inflammation, even in the presence of disease-causing bacteria.

These results suggest potential new opportunities for personalized IBD therapies. “It remains to be seen if the antimicrobial molecules could be a potential therapeutic option - not only for the individuals with XIAP deletions, but also with other IBD-linked genetic defects that disrupt Paneth cells,” adds Prof. Zeissig.

About the Center for Regenerative Therapies Dresden (CRTD)

The Center for Regenerative Therapies Dresden (CRTD) of TU Dresden is academic home for scientists from more than 30 nations. Their mission is to discover the principles of cell and tissue regeneration and leveraging this for recognition, treatment and reversal of diseases. The CRTD links the bench to the clinic, scientists to clinicians to pool expertise in stem cells, developmental biology, gene-editing and regeneration towards innovative therapies for neurodegenerative diseases such as Alzheimer's and Parkinson's disease, hematological diseases such as leukemia, metabolic diseases such as diabetes, retina and bone diseases.

The CRTD was founded in 2006 as a research center of the German Research Foundation (DFG) and funded until 2018 as a DFG Research Center, as well as a Cluster of Excellence. Since 2019, the CRTD is funded by the TU Dresden and the Free State of Saxony.

The CRTD is one of three institutes of the central scientific facility Center for Molecular and Cellular Bioengineering (CMCB) of the TU Dresden.

Small intestinal crypts of IBD patients with unchanged (left) and mutated (right) XIAP gene. Paneth cells are labeled in red and nuclei of all cells in a crypt are labeled in blue. 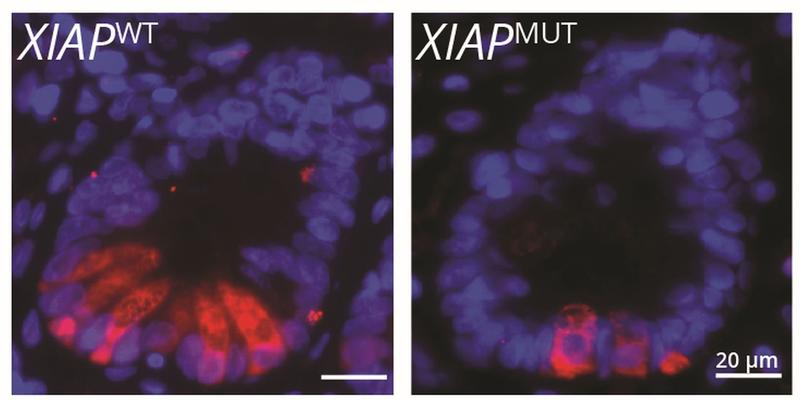