Climate and evolution: New study on the global distribution of lichens

Lichens colonise all regions of the earth, from the poles to the equator. They are a symbiosis of fungi and algae. Secondary metabolites, so-called “lichen substances” produced by the fungal partner play a central role to maintain this symbiosis. An interdisciplinary research team from the University of Bayreuth, the University of Hohenheim, and the Bavarian State Natural Science Collections has now discovered how different climatic conditions influence the chemical properties of lichen substances and thus the evolution and global distribution of lichens. They present their research results in "Ecology Letters".

The fungi and algae associated in lichens closely depend on each other. The fungal partners (mycobionts) usually form the main part of the lichen body with their hyphae. In this way, they protect the algae (photobionts) from UV radiation of sunlight and other harmful environmental influences. In return, the fungi obtain vital carbon compounds that the algae produce through photosynthesis. As the researchers have discovered, some lichen fungi go to great lengths to maintain this self-sufficiency in carbon. They protect the green algae, which are particularly sensitive to UV radiation, by producing so-called "lichen substances" that absorb UV radiation. At the same time, these lichen substances - known in research as secondary metabolites - facilitate the transfer of carbon from the algae to the fungi.

The lichen substances produced by the fungal partners in different regions of the earth differ significantly in terms of their chemical properties. Their ability to absorb UV radiation varies, as does their solubility in water. The more soluble the lichen substances are, the greater the danger of the lichen substances being washed out in regions with high precipitation and high temperatures. The researchers from Bayreuth, Hohenheim, and Munich have identified these globally varying chemical properties of lichen substances in elaborate calculations. In parallel, they analysed big existing datasets on the global occurrence and ecologically relevant characteristics of more than 10,000 lichen species. In the joint analysis of these data, they found that the UV absorption capacity and the water solubility of the lichen substances have a clearly recognisable influence on the evolution and global distribution of lichens. Thus, lichen substances are less water-soluble in tropical regions with heavy rainfall and high temperatures than in cooler and drier regions, where the risk of leaching is considerably lower.

The research results published in Ecology Letters are the result of close interdisciplinary cooperation between the three partner institutions in Bayreuth, Hohenheim, and Munich. Experts from plant ecology, mycology/lichenology, natural product chemistry, phylogenetics, bioinformatics, ecoinformatics, and data science all contributed to the study. In fact, the results of the joint investigations are not only of great interest for research into global biodiversity and climate-related influences on evolution. Lichen substances have antibiotic effects, as confirmed in the course of chemical analyses, and also play a major role in rock weathering. Therefore, the new study is also of great interest from the perspective of natural products research and biogeochemistry. 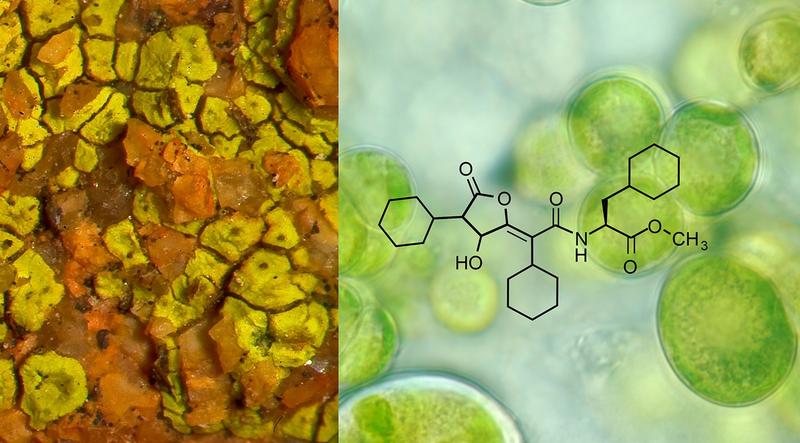