A skull two meters long, a total body length of 17 meters, a weight of 45 tons, fins that comb the sea - what sounds like a sperm whale is actually a reptile and lived around 250 million years ago. Now, an international team of researchers led by the Universities of Bonn and Mainz, as well as the Claremont Colleges and the Natural History Museum of Los Angeles County, reports on this first giant animal that ever evolved. The study, published in the journal Science, shows that the ichthyosaurs evolved their impressive size within only three million years, much faster than the evolution of gigantism in today's whales.

While dinosaurs ruled the land, ichthyosaurs and other aquatic reptiles ruled the waves. Evolving fins and hydrodynamic body-shapes seen in both fish and whales, ichthyosaurs swam the ancient oceans for nearly the entirety of the Age of Dinosaurs. Ichthyosaurs derive from an as yet unknown group of land-living reptiles and were air-breathing themselves “From the first skeleton discoveries in southern England and Germany over 250 years ago, these ‘fish-saurians’ were among the first large fossil reptiles known to science, long before the dinosaurs, and they have captured the popular imagination ever since,” says lead author Dr. Martin Sander, Professor of Vertebrate Paleontology at the University of Bonn and Research Associate at the Dinosaur Institute at the Natural History Museum of Los Angeles County (NHM).

He and his colleagues have been working regularly for 30 years on a rock unit called the Fossil Hill Member in the remote Augusta Mountains of Nevada (USA), because the mountains connect our present to ancient oceans, opening a window into the Triassic of 247.2 to 237 million years ago. It was also in the Fossil Hill Member, in 1998, that the first remains of the new giant animal now described came to light, initially in the form of part of the vertebrae.

“The importance of the find was not immediately apparent,” notes Sander, ”because only a few vertebrae were exposed on the side of the canyon. However, the anatomy of the vertebrae suggested that the front end of the animal might still be hidden in the rocks.” On a September day in 2011, the crew tested this suggestion by excavation, finding the well-preserved skull, forelimbs, and chest region. The giant that came to light was given the name Cymbospondylus youngorum, with the second part of the name referring to a local brewery.

Anatomical description of the animal

So how do you deal with this impressive find from a long time ago? The first task was to describe the anatomy of the skeleton using traditional paleontological methods and to determine when the animal had lived. To find out how fish-saurians evolved to such a size, the researchers compiled extensive data from the literature and used it as the basis for computational and modeling analyses. The result was that the new ichthyosaur lived in the Middle Triassic (247 to 237 million years ago) and was more than 17 meters long, as large as a sperm whale. The find represents the largest animal yet discovered from this time - whether on land or in the sea. "As far as we know, it was even the first giant creature to ever inhabit the Earth," Sander says. The more detailed analyses revealed that Cymbospondylus youngorum lived 246 million years ago - about three million years after the first ichthyosaurs had changed from land reptiles to aquatic reptiles. Even though three million years sounds long by our standards, "That's an amazingly short time to grow that big," Sander emphasizes.

Computer models for the reconstruction of the ecosystem

The new findings thus also raised a new question: How could one species among the ichthyosaurs evolve so quickly into such a giant? To find out, the team used modeling to recreate the energy flow of the ecosystem at the time. "One rather unique aspect of this project is the integrative nature of our approach," says senior author Dr. Lars Schmitz, Associate Professor of Biology at Scripps College and Dinosaur Institute Research Associate. "After describing the anatomy of the giant skull in detail and thus understanding how this animal is related to other ichthyosaurs, we wanted to understand the significance of the new discovery in the context of the large-scale evolutionary pattern of ichthyosaur and whale body sizes. To do this, we needed to figure out how the fossil ecosystem preserved in the Fossil Hill Member may have functioned."

Using sophisticated computer models, the authors examined the likely energy running through the Fossil Hill Fauna’s food web, recreating the ancient environment through data, finding that marine food webs must have been able to support an even more colossal meat-eating ichthyosaur.

"To understand the functioning of this food web from ecological modeling was very exciting," says Dr. Eva Maria Griebeler, Professor of Evolutionary Ecology at the University of Mainz. She and her team led the ecological modeling. Her conclusion: "Due to their large size and resulting energy demands, the densities of the largest ichthyosaurs from the Fossil Hill Fauna including Cymbospondylus youngorum must have been substantially lower than suggested by our field census."

The researchers found that while both cetaceans and ichthyosaurs evolved very large body sizes, their respective evolutionary trajectories toward gigantism were different. According to Schmitz, "Evolutionary models show very clearly that ichthyosaurs had an initial boom in size, becoming giants early on in their evolutionary history, while whales took much longer to reach the outer limits of huge.” The reason is that ichthyosaurs appear to have benefited from an abundance of eel-like conodonts as well as a variety of ammonites, shell-bearing relatives of modern cuttlefish and octopuses, particularly the nautilus. The now-extinct ammonites filled the ecological void following the end-Permian mass extinction and found excellent living conditions. "We assume that ichthyosaurs were also able to evolve so rapidly because they were the first larger creatures to populate the world's oceans and were exposed to less competition," says Martin Sander.

In contrast, certain types of plankton were an important driving force for the size evolution of whales. In addition, the different species of whales and dolphins evolved differently, associated with certain feeding specializations. Baleen whales, for example, lost their teeth, while giant squid-hunting sperm whales retained them. One thing is certain: although their evolutionary routes were different, both whales and ichthyosaurs relied on exploiting niches in the food chain to make it really big.

“This discovery and the results of our study highlight how different groups of marine tetrapods evolved body sizes of epic proportions under somewhat similar circumstances, but at surprisingly different rates,” says NHM’s Associate Curator of Mammalogy (Marine Mammals), Dr. Jorge Velez-Juarbe. “Another interesting aspect is that Cymbospondylus youngorum and the rest of the Fossil Hill Fauna are a testament to the resilience of life in the oceans after the worst mass extinction in Earth's history. You can say this is the first big splash for tetrapods in the oceans.”

For a beer - How the Cymbospondylus youngorum got its name

The new name for the species, Cymbospondylus youngorum, honors a happy coincidence, the sponsoring of the fieldwork by Great Basin Brewery of Reno, owned and operated by Tom and Bonda Young, the inventors of the locally famous Icky beer which features an ichthyosaur on its label.

Where to visit Cymbospondylus youngorum

Cymbospondylus youngorum will be permanently housed at the Natural History Museum of Los Angeles County, where it is currently on view. For more information visit: https://NHM.ORG/ichthyosaur. In addition, a copy of the skull will soon be on display at the Goldfuß Museum at the University of Bonn.

The study was supported by the German Research Foundation, the National Geographic Society, the W.M. Keck Science Department, the Dinosaur Institute at the Natural History Museum of Los Angeles County, Great Basin Brewery, and the National Science Foundation of the USA.

NHM Dinosaur Institute volunteer Viji Shook lying next to the skull of Cymbospondylus youngorum for scale, during the preparation of the specimen. 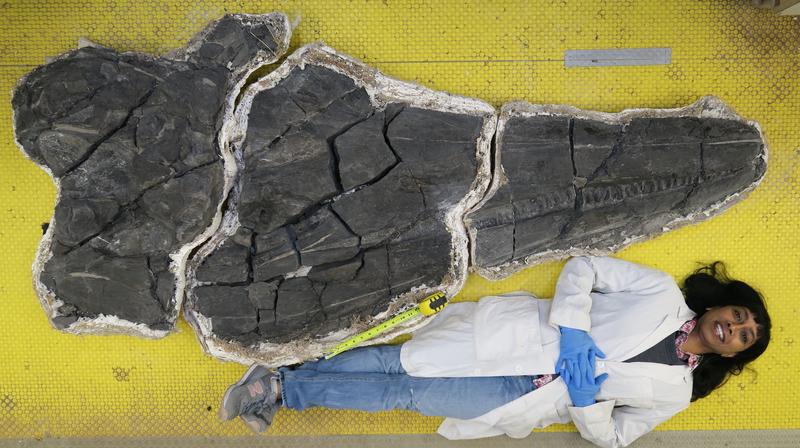 A life recreation of C. youngorum stalking the oceans of the Late Triassic 246 million years ago. 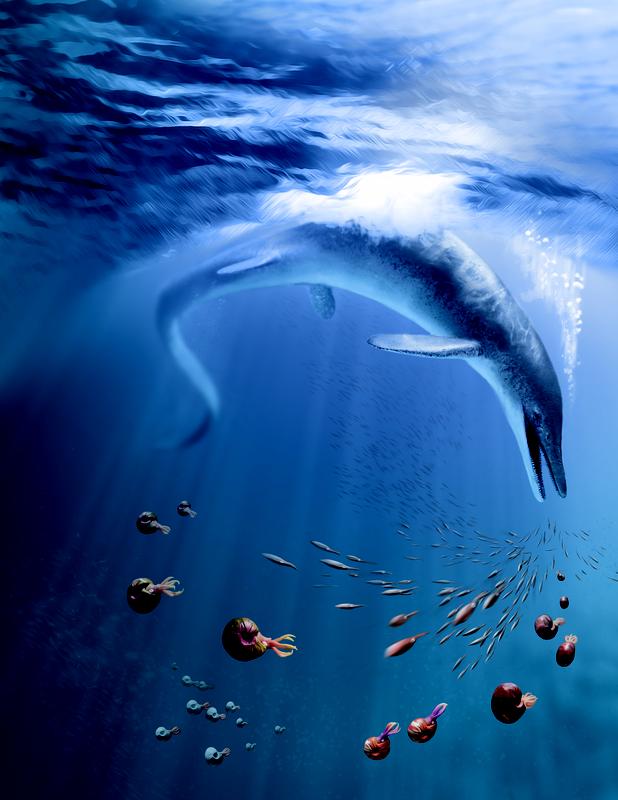