A study led by microbiologists at TU Dresden shows that methanogenic archaea do not always need to form methane to survive. It is possible to bypass methanogenesis with the seemingly simpler and more environmentally friendly acetogenic energy metabolism. These new findings provide evidence that methanogens are not nearly as metabolically limited as previously thought, and suggest that methanogenesis may have evolved from the acetyl-CoA pathway - an important step towards fully understanding the ecology, biotechnology, and evolution of archaea.

Archaea are small single-celled microorganisms (microbes) that form one of the three domains of cellular life, along with bacteria and eukaryotes. They do not possess a nucleus and therefore belong to the prokaryotes like bacteria. Methanogenic archaea form methane as the end product of their energy metabolism (catabolism), an important intermediate product in the global carbon cycle, which is many times more climate-affecting than carbon dioxide. Methanogens are found primarily in bogland, rice fields, manure, and in the digestive tract of ruminants.

Until now, it was considered scientifically established that methanogens have no alternative means for energy conservation and therefore must produce methane. The reductive acetyl-coenzyme A (acetyl-CoA) pathway, which has several steps in common with methanogenesis and is responsible for the synthesis of cellular components (anabolism) in methanogens, could represent such an alternative. Indeed, it is the only metabolic process that can be involved in both catabolism and anabolism.

Prof. Michael Rother, microbiologist at Technische Universität Dresden, and his team, together with colleagues from Göttingen, Leipzig and Helsinki, have now investigated a peculiar phenomenon in the methanogenic archaeon Methanosarcina acetivorans: During growth on carbon monoxide (CO), M. acetivorans forms little methane, and cellular carbon flux is significantly diverted from the methanogenic pathway toward acetyl-CoA. Acetate produced from the acetyl-CoA pathway directly allows synthesis of adenosine triphosphate (ATP) through substrate level phosphorylation.

Rother and his team now wanted to know whether the organism's metabolism can be completely "forced" into acetogenesis, i.e., whether the methanogenic traitis indeed essential. The team was successful and ended up selecting a mutant that grew without significant methane formation, i.e., that had turned into an acetogen. Genetic, genomic and proteomic analyses of the selected strain revealed that although crucial components of the respiratory chain were now absent, the enzyme that produces its substrate (a heterodisulfide) was still essential for survival.

"This apparent contradiction can only be explained by a previously unknown anabolic - and essential role of the heterodisulfide, which we now need to figure out," says Prof. Rother, adding, "It is quite something to overturn such an old paradigm, namely that all methanogens are obligate methanogenic. In fact, they are probably not nearly as limited in energy metabolism as previously thought. Moreover, the possibility of converting methanogenic metabolism into the seemingly simpler acetogenic metabolism suggests that methanogenesis may have evolved from an ancient version of the acetyl-CoA pathway."

If the flexibility of energy metabolism observed in M. acetivorans is more widespread than previously thought, it could lead to approaches to reduce man-made methane emissions without having to completely inhibit these important organisms. 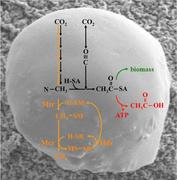 <
The acetyl-CoA pathway (black) and methanogenesis (orange) in a Methanosarcina cell. Acetyl-CoA is e ...

<
The acetyl-CoA pathway (black) and methanogenesis (orange) in a Methanosarcina cell. Acetyl-CoA is e ...

The acetyl-CoA pathway (black) and methanogenesis (orange) in a Methanosarcina cell. Acetyl-CoA is either used anabolically (green) or catabolically (red); cofactors and enzymes involved are abbreviated, the input of electrons is not shown. 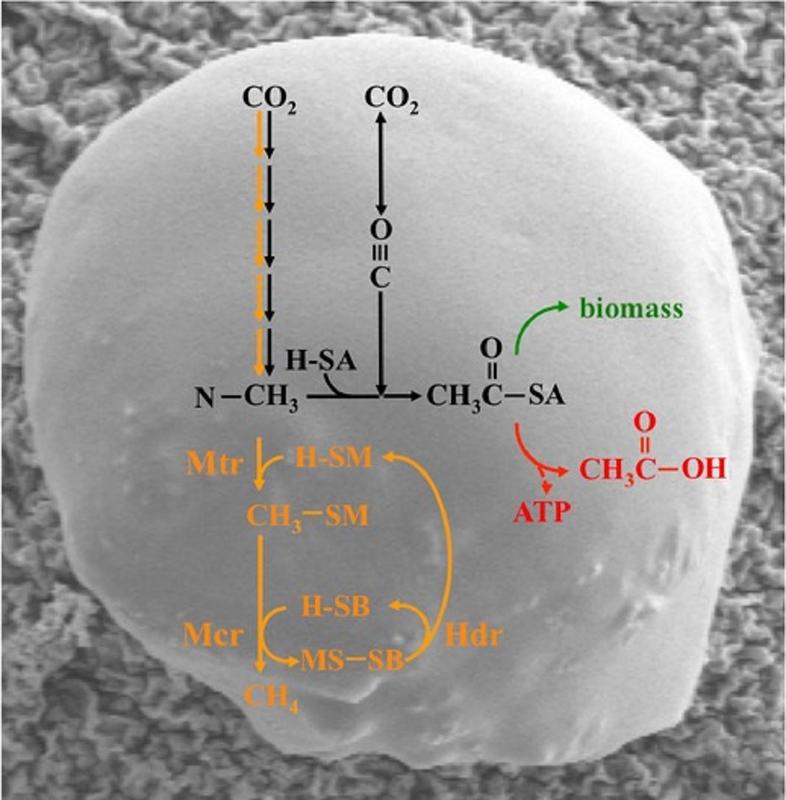